Experimental Philosophy and the Origins of Empiricism: Symposium Abstracts

Below are the abstracts of the papers that we will discuss at the upcoming symposium on experimental philosophy and the origins of empiricism. The symposium will take place at the University of Otago in Dunedin, NZ, on the 18th and 19th of April and you can find the programme here.

If you would like to attend but have not registered yet, drop an email to Peter. Attendance is free, but we’d like to have an idea of how many people are coming. If you cannot attend, but are interested in some of the papers, let Alberto know. We are happy to circulate them in advance and would love to hear your comments. Also, check this blog in the weeks after the symposium. We will post discussions and commentaries on the papers. We’re looking forward to extend our discussions to the blog. We might also post the video of one of our sessions if we manage to. 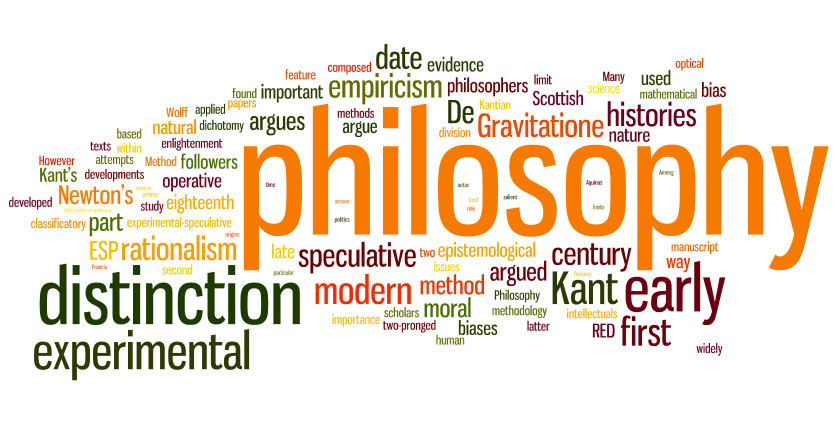 Peter Anstey, The Origins of the Experimental-Speculative Distinction
This paper investigates the origins of the distinction between experimental and speculative philosophy (ESP) in the mid-seventeenth century. It argues that there is a significant prehistory to the distinction in the analogous division between operative and speculative philosophy, which is commonly found in late scholastic philosophy and can be traced back via Aquinas to Aristotle. It is argued, however, the ESP is discontinuous with this operative/speculative distinction in a number of important respects. For example, the latter pertains to philosophy in general and not to natural philosophy in particular. Moreover, in the late Renaissance operative philosophy included ethics, politics and oeconomy and not observation and experiment – the things which came to be considered constitutive of the experimental philosophy. It is also argued that Francis Bacon’s mature division of the sciences, which includes a distinction in natural philosophy between the operative and the speculative, is too dissimilar from the ESP to have been an adumbration of this later distinction. No conclusion is drawn as to when exactly the ESP emerged, but a series of important developments that led to its distinctive character are surveyed.

Juan Gomez, The Experimental Method and Moral Philosophy in the Scottish Enlightenment
One of the key aspects, perhaps the most important one, of the enlightenment in Great Britain is the scientifically driven mind set of the intellectuals of the time. This feature, together with the emphasis of the importance of the study of human nature gave rise to the ‘science of man.’ It was characterized by the application of methods used in the study of the whole of nature to inquiries about our own human nature. This view is widely accepted among scholars, who constantly mention that the way of approaching moral philosophy in the eighteenth century was by considering it as much a science as natural philosophy, and therefore the methods of the latter should be applied to the former. Nowhere is this more evident than in the texts on moral philosophy by the Scottish intellectuals. But despite the common acknowledgement of this feature, the specific details and issues of the role of the experimental method within moral philosophy have not been fully explored. In this paper I will explore the salient features of the experimental method that was applied in the Scottish moral philosophy of the enlightenment by examining the texts of a range of intellectuals.

Related posts: Turnbull and the ‘spirit’ of the experimental method; David Fordyce’s advice to students.

Peter Anstey, Jean Le Rond d’Alembert and the Experimental Philosophy
If the experimental/speculative distinction provided the dominant terms of reference for early modern philosophy before Kant, one would expect to find evidence of this in mid-eighteenth-century France amongst the philosophes associated with Diderot’s Encyclopédie project. Jean Le Rond d’Alembert’s ‘Preliminary Discourse’ to the Encyclopedie provides an ideal test case for the status of the ESP in France at this time. This is because it is a methodological work in its own right, and because it sheds light on d’Alembert’s views on experimental philosophy expressed elsewhere as well as the views of others among his contemporaries. By focusing on d’Alembert and his ‘Discourse’ I argue that the ESP was central to the outlook of this philosophe and some of his eminent contemporaries.

Kirsten Walsh, De Gravitatione and Newton’s Mathematical Method
Newton’s manuscript De Gravitatione was first published in 1962, but its date of composition is unknown. Scholars have attempted to date the manuscript, but they have not yet reached a consensus. There have been two main attempts to date De Gravitatione. Hall & Hall (1962) argue for an early date of 1664 to 1668, but no later than 1675. Dobbs (1991) argues for a later date of late-1684 to early-1685. Each side lists handwriting analysis and various conceptual developments as evidence.
In the first part of this paper, I examine the evidence provided by these two attempts. I argue that the evidence presented provides a lower limit of 1668 and an upper limit of 1684. In the second part of this paper, I compare De Gravitatione‘s two-pronged methodology with the mathematical method in Newton’s early optical papers composed between 1672 and 1673. I argue that the two-pronged methodology of De Gravitatione is a more sophisticated version of the mathematical method used in Newton’s early optical papers. Given this new evidence, I conclude that Newton probably composed De Gravitatione after 1673.

Alberto Vanzo, Experimental Philosophy in Eighteenth Century Germany
The history of early modern philosophy is traditionally interpreted in the light of the dichotomy between empiricism and rationalism. Yet this distinction was first developed by Kant and his followers in the late eighteenth century. Many early modern thinkers who are usually categorized as empiricists associated themselves with the research program of experimental philosophy and labelled their opponents speculative philosophers. Did Kant and his followers know the tradition of experimental philosophy and the historical distinction between experimental and speculative philosophy? If so, what prompted them to introduce the historiographical distinction between empiricism and rationalism?
To answer these questions, the first part of the paper focuses on Christian Wolff, the most influential German philosopher of the first half of the eighteenth century. It is argued that Wolff developed his philosophy in a way that was orthogonal to the experimental-speculative distinction. The second part of the paper argues that the distinction experimental-speculative distinction was known and widely used by Kant’s contemporaries from the 1770s to the end of the century. It is concluded that Kant and his followers were well aware of experimental philosophy. Their choice not to focus on the ESD must have been a deliberate one.

Alberto Vanzo, Empiricism vs Rationalism: Kant, Reinhold, and Tennemann
Many scholars have criticized histories of early modern philosophy based on the dichotomy of empiricism and rationalism. Among the reasons for their criticism are:

The epistemological bias: histories of philosophy which give pride of place to the rationalism-empiricism distinction (RED) overestimate the importance of epistemological issues for early modern philosophers.

The Kantian bias: histories of early modern philosophy that embrace the RED are often biased in favour of Immanuel Kant’s philosophy. They portray Kant as the first author who uncovered the limits of rationalism and empiricism, rejected their mistakes, and incorporated their correct insights within his Critical philosophy.

The classificatory bias: histories of philosophy based on the RED tend to classify all early modern philosophers prior to Kant into either the empiricist, or the rationalist camps. However, these classifications have proven far from convincing.

After summarizing Kant’s discussions of empiricism and rationalism, the paper argues that Kant did not have the classificatory, Kantian, and epistemological biases. However, he promoted a way of writing histories of philosophy from which those biases would naturally flow. It is argued that those biases can be found in the early Kant-inspired historiography of Karl Leonhard Reinhold and Wilhelm Gottlieb Tennemann.

Related posts: Kant, Empiricism, and Historiographical Biases; Reinhold on Empiricism, Rationalism, and the Philosophy without Nicknames

Thanks to Wordle for the word cloud above.