“Empirical Philosophy” before and after Kant

In the late 1780s, few years after the Critique of Pure Reason was published, Kant’s followers engaged in a debate with German experimental philosophers on whose system was superior. Kant’s disciples and his adversaries published tables detailing the differences and comparative advantages of Kant’s rationalism (as it was then classed) over his adversaries’ empiricism, or vice versa. An example is the page of an article by Christian Gottlieb Selle, one of Kant’s early critics,
which you can see below. 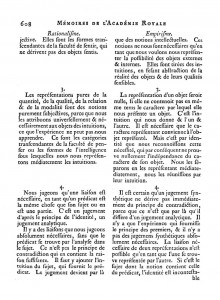 In these debates, “empiricism” and “empirical philosophy” were actors’ categories, that is, categories used to single out certain positions within the then current debates. They were used to identify the positions that we too call empiricist, that is, positions claiming that experience provides the basis for all of our knowledge, knowledge of the world, or substantive knowledge, and that there are no innate ideas or substantive a priori principles.

Joseph Priestley wrote a pamphlet entitled Philosophical Empiricism. Commenting on the natural-philosophical pronouncements of his unnamed opponent, he writes:

These and suchlike long-exploded, and crude notions (so many of which I believe were never thrown together into the same compass since the age of Aristotle or Cartesius) are delivered in a manner and phrase so quaint, and a tone so solemn and authoritative, as gives me an idea that I cannot express otherwise than by the term Philosophical Empiricism.

Here, “empiricism” is used to highlight the crudeness of the opponent’s notions. “Philosophical” may allude, somewhat
ironically, to the solemn tone with which they were presented. This is hardly the sense in which Locke, Hume, or Priestley himself would be later called empiricists.

Adam, the Patriarchs, and Empirical Philosophy

If we turn to German texts, we can find yet another use of “empirical philosophy”. Historians of philosophy, like Heumann and Brucker, were embarrassed as to how they should categorize the wisdom of Jewish Patriarchs and early Greek sages. Reports of their deeds, myths, and ancient rules of political prudence show that they made use of their God-given disposition to philosophize. However, it would seem wrong to put their wisdom on a par with the more recognizably philosophical reflections of Socrates or the Pre-Socratics. German historians found a compromise by classing the reflections of the Patriarchs and early Greek thinkers as forms of empirical philosophy, as opposed to scientific, demonstrative philosophical systems which alone are philosophy in a narrow, proper sense.

The “empirical philosophy” of the Patriarchs, just like Bacon’s “empirical philosophers” and Priestley’s “philosophical empiricism”, has little to do with the current notion of philosophical empiricism. This suggests that that notion saw the light only in late eighteenth-century Germany. Or did I miss any earlier, pre-Kantian uses of that notion? If you have any
suggestions, I would love to hear them. Please leave them in the comments or get in touch.

This entry was posted in Ideas and tagged empiricism, Kant by Kirsten Walsh. Bookmark the permalink.