As 2012 draws to a close, we’d like to announce some minor changes to our blog.  While our Marsden funding has ended and we are gradually moving onto other new projects, our interest in early modern experimental philosophy continues and so will this blog.

Peter Anstey has moved to the University of Sydney, where he is about to begin a project on ‘The nature and status of principles in early modern philosophy’. His book John Locke and Natural Philosophy has recently been awarded the Journal of the History of Philosophy Book Prize for the best book on the history of Western philosophy published in 2011.

And Alberto Vanzo has moved to the University of Birmingham, where he is a Marie Curie research fellow. He is working on developments in the history of the rationalism and empiricism distinction.

We still have much to study and to blog about – so we will all continue to make regular posts on this blog, along with the occasional guest-blogger.  But in the New Year, we will post fortnightly instead of weekly.  We value your interest in our blog, and we hope you will continue reading, commenting and criticizing and contributing to our research next year.  Our first post of 2013 will appear on 7 January.

We at Early Modern Experimental Philosophy wish you a happy festive season and look forward to hearing from you in 2013!

On a final note, since tomorrow marks 370 years since Newton was born*, I couldn’t resist adding this picture.  My apologies to those of you with historically-sensitive eyes! 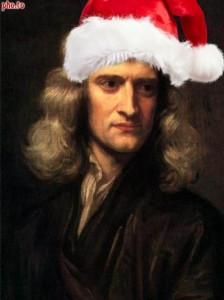 This entry was posted in Updates by Kirsten Walsh. Bookmark the permalink.