Online submission of assignments through Blackboard is now very common at Otago.  Many lecturers choose to download their students’ submitted essays to their computer and edit the documents to provide marginalia, comments, and other alterations, before re-uploading.  Marking in this way on your own computer  is relatively straightforward using Microsoft Word’s reviewing functions, or other third party software.

However, an alternative method of providing this feedback to students is to use the “inline grading” functionality which is built right into the Grade Centre in Blackboard.  Inline grading uses a tool called “crocodoc”, which has been part of Blackboard for Otago users since an update in December 2014.  When marking using inline grading, all the alterations are completed within Blackboard itself.  Mark-ups are automatically saved and can be returned to later.

To use inline grading, visit the Grade Centre, and select an assignment to mark.  You may want to enter Student Preview Mode and upload an assignment of your own that you can experiment on.  In preview mode, visit the assignment as a student, upload it, and then exit preview mode, being careful to select the option to keep your preview data.

If you then find and bring up your assignment in the Grade Centre, you can see a button which says “comment”.  Clicking this brings up the series of tools you can use with inline grading.

Inline grading offers several benefits over downloading-and-marking.  Firstly, the interface for crocodoc is very simple, and includes all and only the tools a grader will typically need.  To my eye, at least, this makes inline grading more straightforward to use than Word’s reviewing functions.

Secondly, inline grading cuts out the steps of downloading the essays, opening each, resaving each with alterations, and then re-uploading the new version to Blackboard – so it may be more time efficient.  Because all the data is continuously stored and ordered online, inline grading simplifies the task of organising and keeping track of student files.

On the other hand, a drawback to inline grading is that an internet connection to Blackboard is required at any point when one wishes to mark.  The system also may not work particularly effectively on tablet devices.

In the screenshot below, I have marked up an example essay, which demonstrates the range of reviewing functions that crocodoc allows. 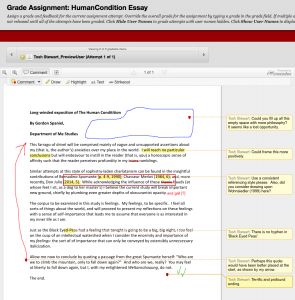 Further instructions on the use of inline grading are available on our Blackboard Helpsite, or on Blackboard’s short tutorial video (less than three minutes).

This entry was posted in blackboard, Uncategorized and tagged assignments, blackboard, grading by Tosh Stewart. Bookmark the permalink.