At the moment, we’re unable to undertake any more 3D printing jobs.  We will update this page when we’re back up and running.

What is 3D Printing?

3D printers use a heated nozzle to melt plastic and deposit it onto a printing surface.  Layer by layer, a three-dimensional object is produced.  Objects can be designed from scratch in applications such as Google Sketchup Make, or they can be downloaded from internet repositories such as Thingiverse. 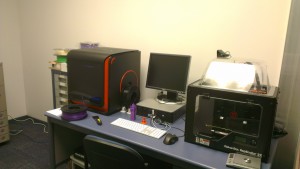 3D printing technology has many applications across teaching, learning and research. We have used our printers to make custom mounting brackets for our new mobile recording boxes for Media Production.  We have created replacement battery covers for our classroom clickers.  We’ve created 3D terrain maps of locations in the South Island, and we have printed a 3D model of a compound synthesised by the Department of Chemistry.

Some potential uses of 3D printing are: 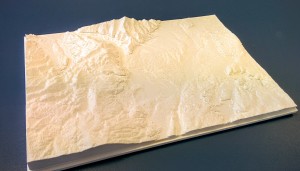 What we’re currently working on

We’ve been printing a large set of model nucleotides for teaching CELS, as well as some sugar feeders for a project on bees, which is explained in more detail here.

We are planning some events to show 3D printing around the Dunedin Campus.