The Journeys of Besieged Languages 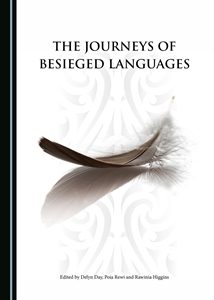 Kāore te kumara e kōrero ana mo tōna ake reka (the kumara never talks of its own sweetness), and Professor Poia Rewi has been humble as usual about his latest publishing success.  Arising out of the Te Kura Roa: Minority Language & Dialect Conference held at Otago in 2015, Poia co-edited a new book, The Journeys of Besieged Languages, published by Cambridge Scholars Publishing.  His co-editors include Dr Delyn Day, a PhD graduate from te Tumu, and Professor Rāwinia Higgins, a former staff member now at Victoria University of Wellington. Unlike the award-winning, The Value of the Māori Language: Te Hua o Te Reo Māori, (also co-edited by Poia and Rawinia), The Journeys of Besieged Languages focuses on endangered languages from around the world, from New Zealand, the Pacific, Australia, North America, Europe, Greenland, and Israel.  Koia kei a koutou, Poia mā.

Posted on November 25, 2015 by Lachlan Paterson

The Journal of Pacific History has reached its 50th year, and the editors have produced a “Virtual Special Issue” to commemorate this milestone with 26 previously published essays.  Authors include the likes of Marshall Sahlins, Greg Dening, Neil Gunson, Judith Binney and others.  Included among the luminaries is Te Tumu’s Professor Michael Reilly, with his essay, ‘Grief, Loss and Violence in Ancient Mangaia, Aotearoa and Te Waipounamu’, which appeared in Vol. 47 (2012).  As the editors state, this ‘is a brilliant analysis of the language of emotion in vernacular texts by a prolific contributor to JPH.’  Congratulations, Michael, for this recognition of your great contribution to Pacific history.