Yes, viruses attack bacteria – and bacteria fight back, but not the way we thought 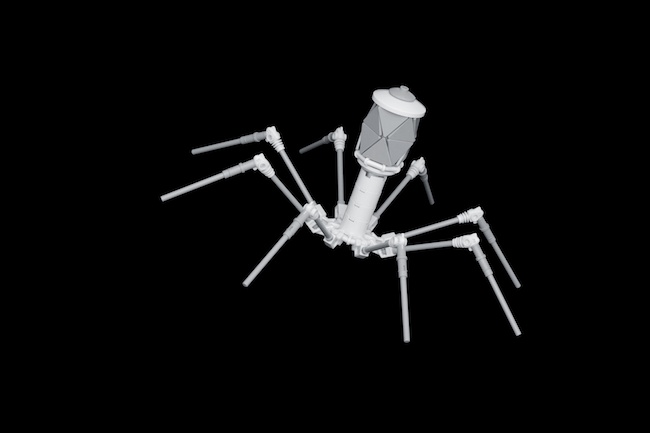 Lego model of a bacteriophage (image: Pascal, Heidelberg, Germany; licensed under CC BY 2.0)

Recent insights into how bacteria defend themselves against viruses, as revealed by Otago Biochemistry scientists and their colleagues, could guide the development of new treatments for bacterial infections.

Viruses don’t just set their sights on us big, multicellular animals. There are loads of viruses that attack our single-celled cousins too – like bacteria. The rise of drug-resistant bacteria has led to a renewed interest in these viruses, which are called phages, and the possibility of using them as medicine to fight bacterial infections.

There is a problem with using phage to fight bacteria though: despite bacteria only being single-celled organisms, they, like us, have complex immune systems to fight back against the onslaught of the tiny, deadly viruses.

Some years ago, some canny scientists discovered that bacteria carve up the DNA of invading viruses, saving little pieces of it in their own DNA. The bacteria do this so that they can identify and defend themselves from those same viruses that attack in the future. The scientists called this nifty mechanism ‘CRISPR’. Since then, CRISPR has become famous, because it turns out to be a really easy, precise way to cut DNA in exactly the place you want it to be cut. Now many scientists use CRISPR in their labs, ushering in a whole new era of genetic engineering (and associated controversy).

CRISPR, however, turns out to be a risky strategy for bacteria to defend themselves against viruses.

We know already that CRISPR is very effective at defending bacteria against “lytic” phages. These are phages that multiply inside the host cell until the cell bursts, releasing the new viruses. But there are also “lysogenic” phages. When these phages infect bacteria, they first integrate their DNA into that of the host cell and become dormant. When the bacteria become stressed, this or signals from other phages will trigger the dormant phages into action, multiplying like lytic phages until the host cell bursts.

Scientists from a phage research laboratory in the UK were recently studying the effect of phages on Pseudomonas aeruginosa (bacteria that cause nasty infections, especially in people with cystic fibrosis or traumatic burns), and infected the microbes deliberately with lysogenic phages.

The researchers were astonished to find that having CRISPR was a disadvantage for the bacteria. Those with CRISPR were really bad at defending themselves against the lysogenic phages, but bacteria that had lost CRISPR from their genome avoided the damage, survived and proliferated.

Digging into this a little further, they found that having CRISPR set up an ‘autoimmune’ disorder in these bacteria. The bacteria’s immune systems started to attack themselves because the lysogenic phage had hidden their DNA in that of the bacteria.

So, how common is CRISPR in bacteria, if it can both be an advantage and a disadvantage? 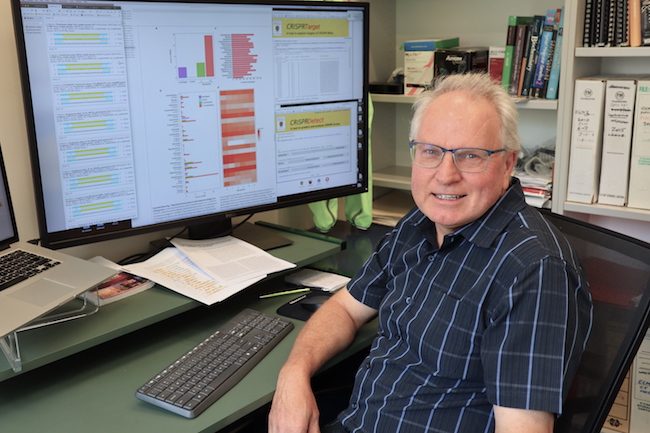 Dr Chris Brown with figures from the Nature paper on his monitor.

They found that CRISPR is only present in about 40% of bacterial genomes and is frequently gained and lost from closely related strains. For example, Staphylococcus aureus bacteria, which often take up extra genes to become multidrug-resistant, seldom have CRISPR.

This suggests that triggering the powerful CRISPR defence system is risky for a bacterium. Is this an Achilles heel that we could exploit to fight bacteria in the future?

Possibly. Dr Chris Brown emphasises the importance of studies such as these in fighting infectious disease. “This change in understanding of pathogen defence systems may contribute to new treatments, particularly those using viruses that kill bacteria, or triggering self-destruction by CRISPR,” he commented.

You can find the paper behind a paywall on the Nature website: “Targeting of temperate phages drives loss of type I CRISPR–Cas systems.”

You can also read about the study in a press release from the University of Exeter.