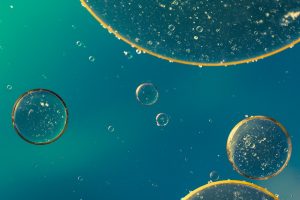 We all know that eating too much bad food and not exercising puts us at risk of cardiovascular disease. But did you know there is another risk factor that increases the risk of heart disease in more than 1 in 5 people, that is determined by a person’s genetics, doesn’t respond to diet or exercise, and currently has no treatment?

This risk factor is a high level of lipoprotein(a) in the blood.

Lipoproteins are packages for carrying lipids (a fancy word for fats and oils) in the blood. Lipids do not mix well with water or blood, therefore they have to be packaged up with special proteins so they can be moved in the blood stream around the body.

If you have had a blood test to check your cholesterol levels, you will probably have heard of terms like LDL (low density lipoprotein) and HDL (high density lipoprotein). These are some of the different types of lipoprotein particles that can be found in your blood. A high level of LDL can cause atherosclerosis (hardening and narrowing of the arteries) and heart disease, whereas a high level of HDL is protective.

Lipoprotein(a) is a type of LDL particle that doesn’t get measured very often. It has an extra protein attached to it called apo(a), which causes the particle to act in a different way to ordinary LDL. Apo(a) is sometimes also called the ‘little rascal’, because high levels of it in the blood (on lipoprotein(a) particles) is associated with heart attacks. 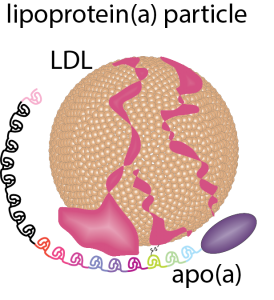 Lipoprotein(a): an LDL particle with a rascal apo(a) protein attached.

Professor Sally McCormick is a guru when it comes to lipoprotein metabolism and cardiovascular disease. Her lab has been producing world-leading research in this area for many years.

Recently, they have been trying to find out how the body removes lipoprotein(a) from the blood.

Cells recognise and ‘swallow’ lipoproteins out of the blood and into themselves using proteins called receptors. Until now it wasn’t clear which receptor recognised lipoprotein(a).

McCormick and her colleagues used fluorescent labels and time lapse photos to watch liver cells swallow lipoprotein(a) particles into themselves and break them up.

They discovered that the receptor that recognises the little rascal apo(a), using it to pull the lipoprotein(a) particles into liver cells, is the same one that recognises plasminogen. Plasminogen is a protein found in the blood that helps to dissolve blood clots.

It turns out that apo(a) and plasminogen have quite similar shapes, even though they have very different roles in the body, so it makes sense that the plasminogen receptor recognises both proteins. 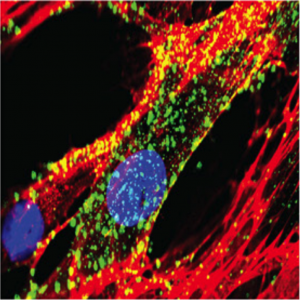 A cell that has ‘swallowed’ lipoprotein(a) particles. The apo(a) proteins are coloured green, the cell nucleus is blue, and cell membranes are red. Yellow spots are where the green and red spots overlap.

The researchers also watched what happened to the lipoprotein(a) particles once they were inside the liver cells. First, the apo(a) protein was broken off the rest of the LDL particle. The LDL part was then moved into lysosomes – the acidic part of the cell that breaks up molecules. The little rascal apo(a) protein, however, was not broken up; instead it was secreted back out of the cell to be recycled.

These findings open up new possibilities for making drugs that combat heart disease.  In the past, when researchers found out how cells recognise and break down the regular LDL particles, it led to the development of statin drugs – now widely used to lower high levels of LDL.

McCormick hopes that understanding what happens to lipoprotein(a) in the body will also lead to the development of a drug – this time one that will help people who have inherited high levels of lipoprotein(a).

Listen to Sally McCormick and her PhD student Monika Sharma talk about their research on ‘Our Changing World’, RNZ National.