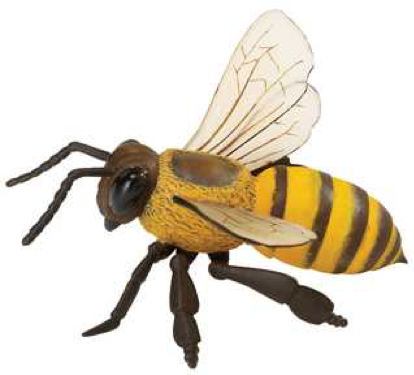 Well, they’re not actually made out of plastic (at least not usually), I mean the other meaning of plastic: easily shaped or moulded.

One set of genes can develop into one of a variety of slightly different bodies, depending on what environment those genes are exposed to. This plasticity is part of how an organism adapts to changes in their environment.

In other words, bees can change their bodies when something in their environment changes. And this happens without the bees changing their genes.

Professor Peter Dearden from the Otago Department of Biochemistry is fascinated by plasticity in animals. He gave a talk to the department recently about his latest research into plasticity using honey bees as a model.

He explained that female honeybees in particular are amazingly plastic.

After a female bee larva hatches out of its egg, it can develop one of two very different bodies: a queen bee body or a worker bee body. 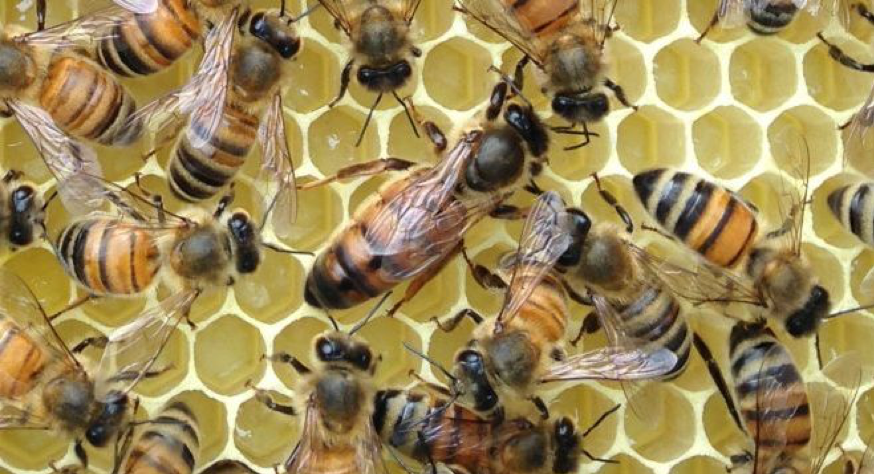 A queen honeybee sits in the middle of the picture, surrounded by her worker bees. Taken from https://friendshillapiary.com.

Only one queen bee lives in a bee hive. She is the largest bee, and has a huge abdomen full of gigantic ovaries, which help her fulfill her destiny as an egg laying machine. She can lay more than 1,500 eggs per day!

Like the queen bee, the worker bees are all female, but they are smaller. They carry out the everyday running of a hive: gathering nectar, producing honey, caring for the queen and larvae, keeping the hive clean, and guarding the hive. A worker bee still has ovaries inside its abdomen, but they are small (really hard for even a bee scientist to find) and don’t make any eggs. 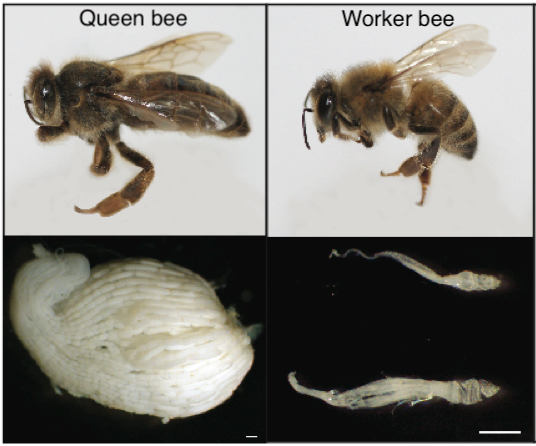 Dissected ovaries from a queen bee and a worker bee. The white lines in each photo are equivalent to the same size. Taken from: “A day in the life of a Honeybee lab” http://thenode.biologists.com/day-in-the-life-of-a-honeybee-lab/lablife.

It’s well known that a female bee larva fed with royal jelly as it grows up will develop into a queen bee, whereas her royal jelly-deprived sisters will develop the bodies of worker bees. This is one example of honey bee plasticity.

But royal jelly is not the whole story.

If you take a queen away from the hive, and the hive can’t make a new one, then the bee plasticity kicks in again. Even though they have worker bee bodies, about one third of the worker bees turn on their previously useless ovaries. Their ovaries grow bigger and they start to lay eggs. The eggs are unfertilised and go on to develop into fertile male bees.

So how does having a queen around stop the worker bees from switching on their ovaries?

It turns out that she makes a special chemical called ‘queen mandibular pheromone’ (QMP for short). QMP has several effects: it makes workers feed and groom the queen and do other colony-related tasks, and it also stops the worker bees’ ovaries making eggs.

The queen keeps her workers in order by secreting QMP. The workers rub and lick the QMP off her while grooming her, and then pass the QMP on to other workers, and so the chemical signal is spread throughout the hive.

Professor Dearden wants to know how exactly the QMP stops the worker bees ovaries from developing.

If you can figure out how plasticity works in bees, you can start to learn how it works in other creatures too, including humans. 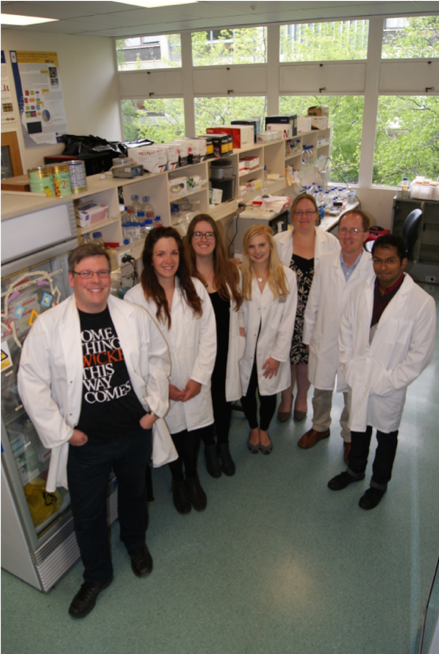 Professor Peter Dearden and some of the researchers in his lab back in 2015. Taken from: “A day in the life of a Honeybee lab” http://thenode.biologists.com/day-in-the-life-of-a-honeybee-lab/lablife/.

Professor Dearden and the researchers in his lab started off using a technique called ‘RNAseq’ – where you look for genes that are active in an organism, and measure how active each of those genes are.

The active genes in worker bees with ovaries not making eggs were generally those involved in basic cell day to day living.

But the active genes in workers with activated ovaries were those involved in cell division, making DNA, and development, including something called the ‘Notch signalling pathway’.

The Notch signalling what?

OK, we’re wading into some deep jargon now. A bit of history might help… Back in 1914, a researcher called John S. Dexter noticed a notch in the wings of some fruit flies. Over the years, geneticists traced the origin of the notch trait to a mutation in a gene. Being geneticists, they called the gene Notch. 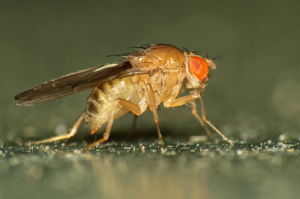 Some fruit fly wings. Wing A is from a normal fruit fly, wing B is from a fruit fly with a mutation in the Notch gene. Photos of wings taken from: “Sophisticated lessons from simple organisms: appreciating the value of curiosity-driven research” Robert J. Duronio, Patrick H. O’Farrell, Greenfield Sluder, Tin Tin Su. Disease Models & Mechanisms 2017 10: 1381-1389; doi: 10.1242/dmm.031203; http://dmm.biologists.org/content/10/12/1381

We now know that the Notch protein (encoded by the Notch gene) sits in the membrane or ‘skin’ of a cell, with part of it inside the cell and part outside. When a particular protein (Delta or Serrate) sticks to the outside part of the Notch protein, it gets cut into two parts. The inside part of Notch is now free to move deeper into the cell, right into the nucleus, where it changes the expression of a number of genes.

This process, called the Notch signalling pathway, is heavily involved in regulating embryo development in mammals and other animals, including the development of muscle, skin, brain, heart, and blood vessels.

So thanks to the RNAseq research, Peter and his fellow researchers suspected that Notch signalling is involved with QMP.

But this still could have been a convenient coincidence. So they set up some experiments to find out whether notch signalling really is involved in the effects of QMP on bee ovaries.

The experiments were published in the journal Nature Communications back in 2016.

They took young bees, newly emerged from pupating in their honeycomb cells, and kept them in cages. None of the bees were exposed to QMP, but some of them were given a drug called DAPT dissolved in a solvent, and others were given the solvent without any DAPT in it (“solvent control”).

The DAPT drug is known to stop the Notch signalling pathway from being activated. It does this by preventing the Notch receptor protein from being cut up.

After 10 days of treatment, the researchers dissected out their ovaries and looked at how many were activated – growing bigger in preparation for making eggs. 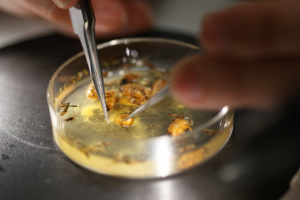 A student from the Dearden Lab dissects an ovary out of a worker honeybee. Taken from: “A day in the life of a Honeybee lab” http://thenode.biologists.com/day-in-the-life-of-a-honeybee-lab/lablife/.

Because the bees did not get any QMP, you would expect that a lot of them would start to activate their ovaries, which was the case for those who only received the solvent control – about 14% had activated their ovaries.

However, giving the bees DAPT stopped nearly all of the ovary activation – only 5% of the bees given DAPT activated their ovaries.

The researchers then repeated the experiment, this time with three groups of bees: one group just receiving solvent control (no QMP or DAPT), one group receiving just QMP, and the last receiving both QMP and DAPT.

Again a decent proportion of the solvent control bees activated their ovaries – 28% this time.

And as you might expect, the bees given QMP stopped ovary activation – only 5% of this group had activated ovaries.

But the bees given both QMP and DAPT were able to overcome the QMP effect, at least partly, with 15% activating their ovaries.

The researchers also looked at specific genes involved in the Notch signalling pathway and found that DAPT stopped them being turned on as well.

Yes, the numbers aren’t totally black and white – as with all things biological there are probably other mechanisms at work in some fantastically complex process. And I wonder whether in an actual hive there really are as many as 5% of worker bees activating their ovaries and laying eggs.

But the results are statistically significant, and clearly show that Notch signalling is playing an important part in honeybee plasticity.

And, as the paper points out, the data show that worker bees don’t have active ovaries simply because their “reproductive potential” wears out, but because something in their environment triggers a conserved cell-signalling pathway.

Peter Dearden and his colleagues are now looking at other parts of the bee plasticity puzzle. They have already figured out that clusters of genes that are turned off in workers with active ovaries are marked by tags known as ‘H3K27me3’. This means epigenetic mechanisms are involved. But that is beyond the scope of this blog entry. We wait for the paper about this new research with great interest.

This entry was posted in Uncategorised and tagged genetics, honeybees, notch, plasticity, Professor Dearden by Miriam Sharpe. Bookmark the permalink.