Biochemistry – with colour! Or the day I narrowly avoided seaweed stain down my front (and found out about a really cool protein) 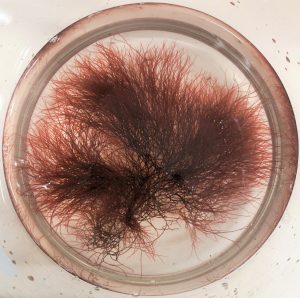 Some time back, I was absent-mindedly striding down the particleboard-clad corridors of the Otago Biochemistry Department, when I nearly smacked right into Malcolm Rutledge, one of our excellent assistant research fellows. Luckily, I stopped just in time, because he was carrying very precious cargo. Nestled in a polystyrene box filled with ice, was a glass tube with a brilliant crimson-red liquid in it.

That liquid might contain a protein from bacteria or DNA from a bee or some cancer cells, but what these molecules have in common is that they are so small that they can’t be seen using most microscopes, and usually have no colour, so they just look like a drop of water to the naked eye.

So Malcolm’s tube of pinky-red liquid was exciting. Almost too exciting, as it nearly ended up all over my front.

I asked him what it was (after apologising for just about running him over). He explained that he was working on a project for his then-boss, Sigurd Wilbanks, helping to uncover some of the mysteries of phycoerythrins, the proteins that give seaweed its colour.

Phycoerythrins are an important part of ocean ecosystems, even though they are tiny – submicroscopic even. They are a special type of protein that captures sunlight, then feeds that sunlight energy into the parts of the seaweed that carry out photosynthesis, so that the seaweed can make food to survive on. The red seaweeds and other related algae and cyanobacteria all have phycoerythrins to capture energy from sunlight, and these organisms, in turn, provide food for a vast network of creatures in the sea. 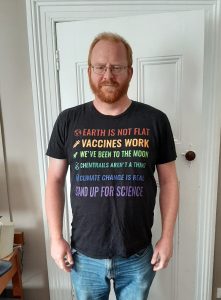 Malcolm with one of his awesome science T-shirts

Buried inside each phycoerythrin you will find a small molecule called a phycobilin, which is the really exciting part from a chemist’s point of view. The phycobilin is the bit that harvests the light energy and therefore gives the protein its distinctive colour.

Different varieties of seaweed live in lots of different light conditions, from the dim green light of ocean depths to the bright light of rock pools. Each seaweed species has evolved to make the most of where it lives, so their phycoerythrins have slightly different shapes and colours, specialised to collect the colour and intensity of light available.

Some seaweeds can even adjust their phycoerythrins as conditions change. If you walk along a rocky shore, you will see seaweeds that live between the high and low tide marks. These are very good at collecting light both when they are exposed at low tide to the bright, white, noon-day sun, and when shaded under other seaweeds and water at high tide. Other seaweeds can adjust their phycoerythrin colour depending on what season it is.

SIgurd was introduced to phycoerythrins back when he was a student studying for his PhD at Berkeley in California, in Alexander Glazer’s research group. Alexander was originally interested in dyes, which lead him to research the brightly coloured phycoerythrin proteins. He got Sigurd to sequence the genes for several phycoerythrins – and Sigurd put together the longest length of DNA sequence at the time (outside of bacteriophages): 14.9 thousand base pairs! (The human genome is about 3 billion base pairs long, and can now be sequenced in a day.) Incidentally, a fellow called George Petersen held the overall record at the time with a bacteriophage chromosome – George was the Professor of Biochemistry at Otago for many decades.

Sigurd’s experience with phycoerythrin genes sequences left him eager to explore what genes encode – proteins and their 3D-structures and how they work. He’s since explored lots of different types of proteins over the years, but his interest in phycoerythrins still thrives. 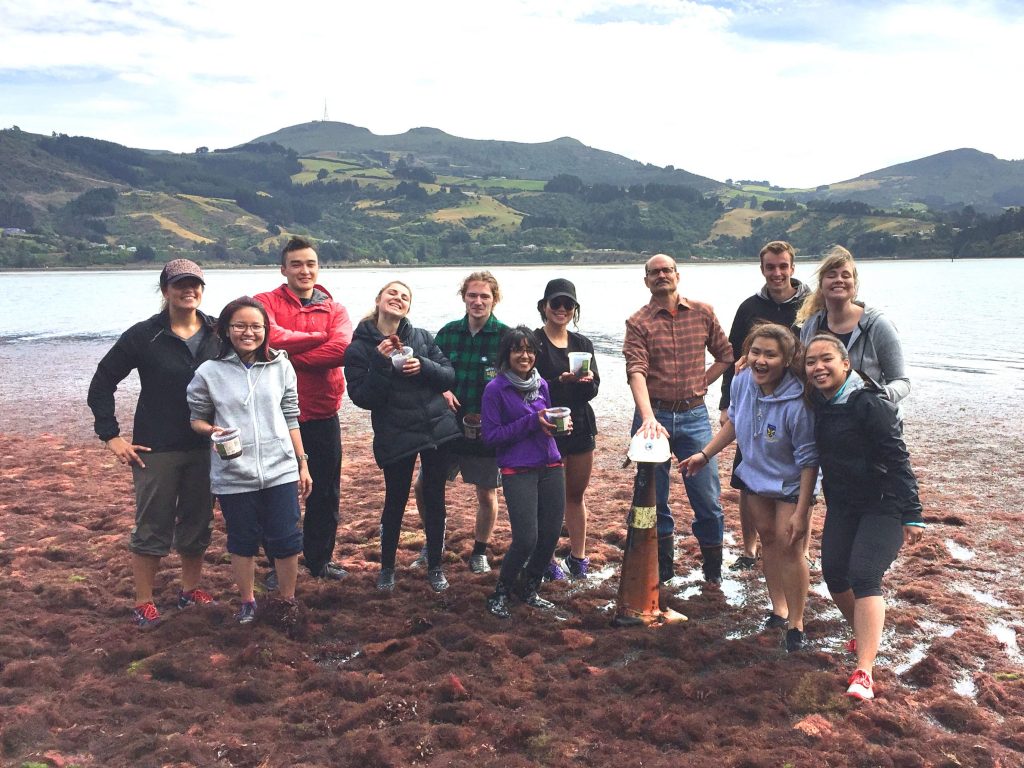 Sigurd (holding the hard hat) and his band of seaweed-collecting 300-level Biochemistry students in 2016.

His research group, plus enthusiastic friends, occasionally brave the weather to collect seaweed from the picturesque shores of the Otago Harbour. They focus on a type of red seaweed called Griffithsia, named in honour of Amelia Griffiths, a Victorian beachcomber and phycologist (someone who studies algae), who collected algae specimens in Britain.

When they get back to the lab, researchers from Sigurd’s group take the Griffithsia seaweed samples and grind them up, bursting open the seaweed cells and releasing molecules like proteins into a kind of seaweed soup. They then sort out the proteins according to size, so they can separate out the phycoerythrins. It’s super easy to figure out which are the phycoerythrins, of course; you just need to look for that brilliant colour. 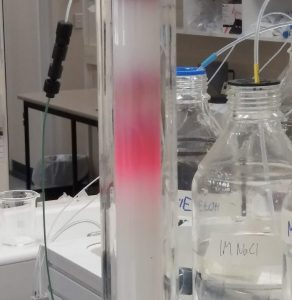 Separating out phycoerythrin from the seaweed soup using ‘size-exclusion chromatography’. Put a mixture of molecules on the top of the glass tube filled with gel, and they will separate according to size as they move through. The lower, brighter pink band is large clusters of phycoerythrin proteins, known as phycobilisomes, the duller red band above is individual phycoerythrin parts.

Phycoerythrins are also useful as tools in biomedical research labs. Their bright, day-glo colour and ability to fluoresce make them easy to find and follow. You can label a part of a cell with phycoerythrin so you can see that part under a microscope, or label a particular type of cell if you need to sort out different types of cells from one another.

Besides being interested in understanding how phycoerythrins work, Sigurd uses phycoerythrin to help him teach biochemistry students about proteins. It’s a nice example of how the shape of a protein influences how it works.

We have been working on making 3D models of phycoerythrin, using a 3D printer, to help students to understand the protein better. It’s one thing to have the protein shape described to you, or pictures of it displayed on a screen, but having the protein rest in your hands, being able to turn it over and explore every bump and hole, gives you an understanding that you can’t get any other way. 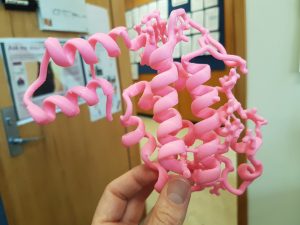 A model of a phycoerythrin beta subunit. About a billion times bigger than the real thing.

I’m glad that I came across Malcolm with his red phycoerythrin sample in the corridor. Phycoerythrin has so much to offer beyond being an eye-catching colour – and is another really cool bit of research happening right here at Otago Biochemistry.

This entry was posted in Uncategorised and tagged phycoerythrin, proteins, seaweed, Wilbanks by Miriam Sharpe. Bookmark the permalink.