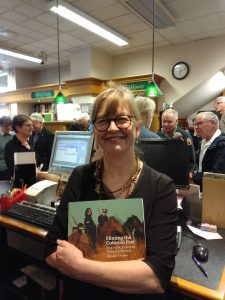 Annabel Cooper at the launch of her book, Filming the Colonial Past, in November last year.

Congratulations to CROCC member Annabel Cooper.  Her book, Filming the Colonial Past: The New Zealand Wars on Screen (Otago University Press), has been placed on the long list for the 2019 Ockham Book Awards, New Zealand’s foremost book awards.  Click here for more information on this outstanding book.

Centre member, Associate Professor Annabel Cooper, is presenting a video conference seminar for the The Identities Network: Constructing and Contesting Dominant Identities in Aotearoa on Tuesday 1 November, beginning at 3pm.

Annabel will be discussing her current project Screen Wars: Remaking the New Zealand Wars in Celluloid and Pixels, a book on screen productions relating to the New Zealand Wars, from 1925 until the present day. The book covers fictional and non-fictional treatments, and film, television and digital media. One distinctive quality that they all share makes screen stories a particularly significant mode of making history about the colonial past: their creation involves both Māori and Pākehā actors, historical advisors, and to greater or lesser extent, crew. For most of these productions the film-makers also elected to film at or near historical locations. So, film productions operate as sites of encounter as well as sites of knowledge production. To what extent are the traces of these encounters, and these whenua, apparent on the screen? Each of these productions created a colonial past for a specific present. This body of successive reiterations provides an index to cultural memory of the colonial past. So, the question of which historical events seemed most compelling to successive generations, how the same figures were rendered at different historical moments, and the shifting emotional registers as the wars came to be thought of in different ways, is also central to this study.

In this session Annabel will take two examples from her book to discuss the way each is shaped by the tangata and the whenua of their production, by their filming on location, and by the traces of their presents as they render their pasts.