During his visit to the University of Otago, Associate Professor Aaron Glass (Bard Graduate Center, New York) will lead a workshop discussing his engagement in film as part of critical anthropology, the ethics of ethnographic representation, and collaborative research. All welcome. Details are below. 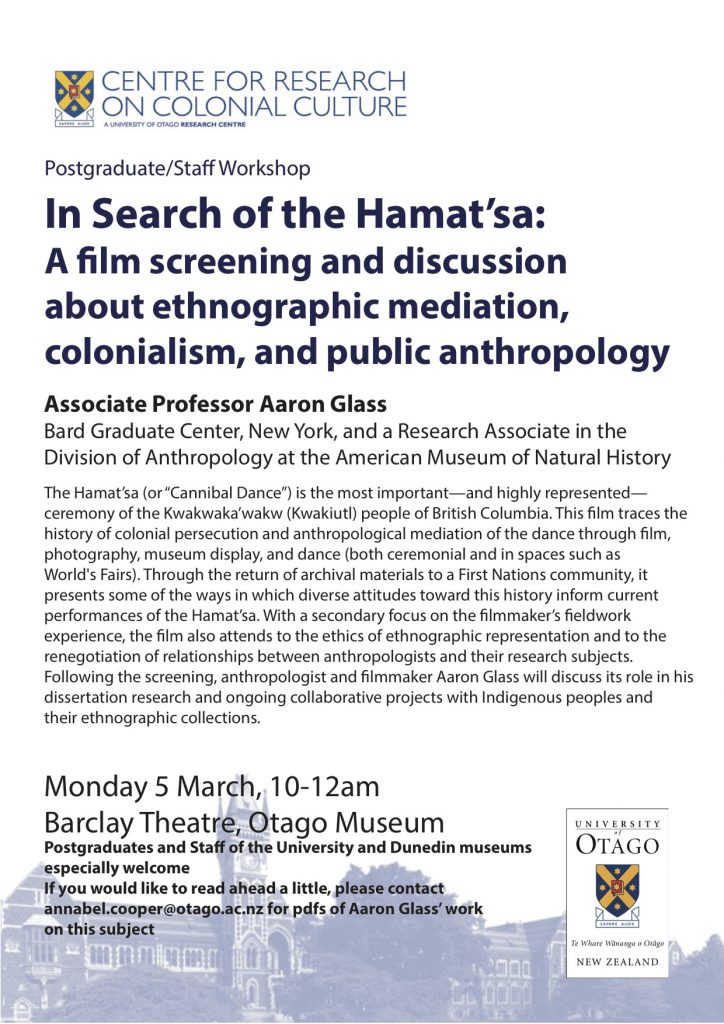 Posted on February 11, 2017 by Lachlan Paterson

Don’t forget the Film in the Colony Symposium, to be held in Wellington, 13-14 July.

If you are interested in presenting a paper, send a 200-word abstract and a brief bio to: filminthecolony@otago.ac.nz by 28 February 2017.

CFP: Film in the Colony

Posted on December 5, 2016 by Angela Wanhalla

On 13 and 14 July 2017, the Centre for Research on Colonial Culture and Ngā Taonga Sound and Vision are hosting the Film in the Colony Symposium in Wellington.

Organisers invite papers that investigate the cross-cultural processes of film production in the colonial context, and the ways in which indigenous and settler participants – performers, crew, or people from the localities where filming took place – took part in productions. In focusing primarily on New Zealand, South Africa and Australia, the symposium also seeks to develop a comparative analysis of the means through which film contributed to the making of national stories in the late colonial era, and how indigenous communities within these colonies engaged with the first few decades of film culture.

Contributions from a variety of disciplines and backgrounds are welcome, such as film studies, history, Māori and/or indigenous studies, anthropology, archives, screen industries, and communities.

Send a 200-word abstract and a brief bio to filminthecolony@otago.ac.nz by 28 February 2017.

This afternoon CRoCC member Associate Professor Annabel Cooper is presenting her research in the Department of Sociology, Gender and Social Work seminar series. The topic is ‘Narrating Colonial Conflict in the Early 1980s: Some Reflections on the Culture Moment of Utu‘. Her seminar examines how Utu re-makes the colonial past within a tumultuous present. It traces the film’s links to a series of documentaries of the same era, including Bastion Point – Day 507 (Mita, Narbey, Pohlmann, 1980), The Bridge – A Story of Men in Dispute (Pohlmann, Mita, 1982), and Patu! (Mita, 1983), and to the drama series The Governor (1977); and it investigates the contributions of significant individuals involved in the production, including Keith Aberdein, Wi Kuki Kaa, Merata Mita, and Anzac Wallace.