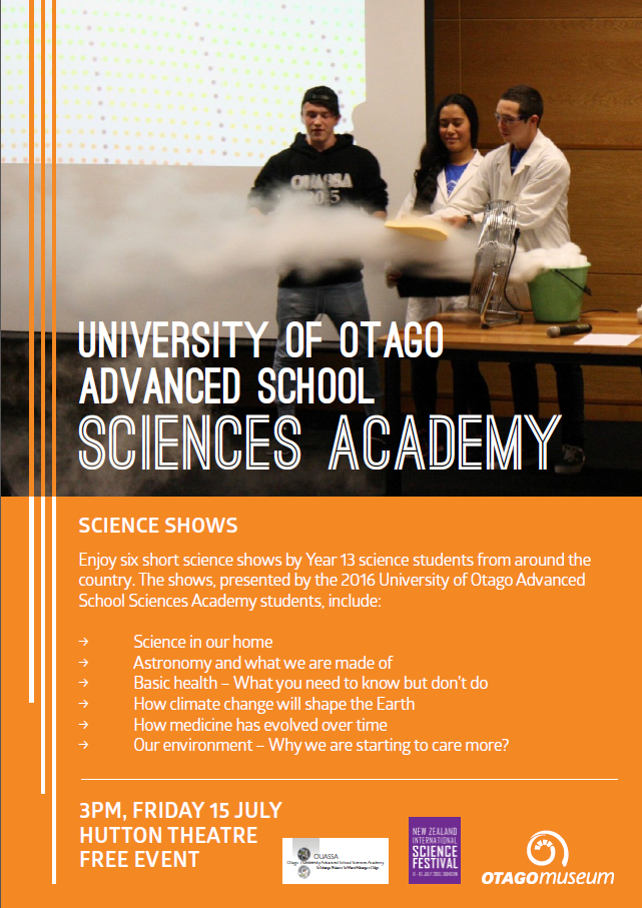 Poster for the 2016 show. The picture is the 2015 Physics group explaining the Physics of Flight.

In July, our current OUASSA student cohort will present short public science shows at the Otago Museum. This is the third year of students to undertake a public show. At the moment, the students are working on their topics and themes (as per last week’s blog post). In developing these though, there has been some chat in their presentation groups online about the audience.

Who is the audience for a public science show? We’ve told the students that it can be anyone from adults to children, people with PhDs in the topic they are talking about (we are at a University after all!) but equally likely people who know nothing about the topic.

We can do a little better than these generalisations though if we look at who is most likely to attend these shows. The general public can be very broad, but it is likely that we will not have a true general public audience but rather a subset.

At the ASC Conference, one of the speakers gave an excellent talk about this very topic. From my notes on the talk, the general public can be roughly divided into 4 groups when it comes to Science Communication:

At another session, a speaker who was arranging events based on Astronomy found that the people who came to the astronomy outreach events were generally young, University educated adults. At the Otago Museum, where the student event will be held, we know that they get a lot of young families coming through the door, parents who fit into one of those first two categories bringing their children to hopefully pass on their love of science or sometimes, children who fit into one of those categories bringing along an open minded parent.

So what does this mean for the students who are working on their shows? I think the first thing to remember is that the people who come to the show will most likely be from those first two groups, they will either be science fans or cautiously keen. This means they will already be open to what the students will be presenting and interested. Interested enough to give up an afternoon and maybe even bring the family along. So we can reasonably count on a friendly audience.

They’ve come in the door friendly and interested. Now what? People in general are funny creatures. They tend to work on emotion and intuition rather than facts. Think about a teacher that you had that you really feel like you learned from. Did you like them? Relationships are very important in communicating a message. The audience has to trust you, trust that you have their best interests at heart and relate to you enough to want to hear what you have to say. That connection with the audience at a personal level is more important that being seen as an expert. Students are often worried that they don’t know enough depth in their topic to be on stage telling the public about it. Knowledge is definitely important, but I would argue that it is more important that they come across to the audience as trustworthy, relate-able and passionate.

More notes from the ASC conference: an engaging outreach activity will:

A 10 minute student public talk is not the time or place to be confronting, controversial, or push a view on a particular issue. The aim is to have the audience leave happy and hopefully having learned something. Very often when students begin their Science communication journey, they subscribe to a deficient model of thinking. The public doesn’t know about X and it is my job to make them understand and accept it. Instead, knowing that the audience is most likely already engaged in some way, with these talks, the focus should be on giving the public enough of a glimpse of the topic that they go away wanting more.

So hopefully that helps a wee bit with the preparation of the public shows. The audience doesn’t expect you to know everything, they expect you to show them something they don’t know or show it to them in a new way. Your enthusiasm and interest in the topic will go a long way to making the audience want to engage in your show and take that journey with you.