Science in a Day

There is a lot that science does for me in a day, but not only does science helps me, it also helps you. It is everywhere and we don’t even know that it is science because it is ‘regular’ and ‘normal.’ So now let’s consider the science of a perfectly normal day.
There’s a ringing in my ear. Slowly I pry open my eyes, darkness still fills the entirety of the room. I reach over, push snooze on my loudly ringing phone. This is the first piece of science that I use for the day. The cell phone was invented by Martin Cooper, of Motorola, back in 1973. Not only does the cell phone send and receive calls as well as texts, but also offers Google, email, a camera and just about anything your mind can imagine. I step out of the warm haven and pad down the hallway to the kitchen. I put on the jug and put bread in the toaster. Yet again, I thank people for their inventions. The first electric jug was invented by Compton and Co in 1891. The toaster was invented by Alan MacMasters in Edinburgh in 1893. Through the years both have been updated to what they are today.

Once fed and dressed, I leave for Gore in my car. Thanks to science I can travel 45 minutes by car to school. The car was invented by Karl Benz who built his first automobile in 1885 in Mannheim, Germany. Thanks to his invention, I can have a better education and more opportunity. When I arrive at the aging, rough cast building of Gore High School, like every Monday morning, I have study first. I dodge past all the juniors to the study room, where I can settle down and finish my history essay, on the Treaty of Waitangi. I pull out my laptop, which was first imagined by Alan Kay in 1968. Now with the conveniences of laptops, writing my essay is much easier than writing the Treaty of Waitangi back in 1840. Second is chemistry, where we are doing titrations. Titrations were first used by Karl Fischer in 1935, to determine the trace amount of water in a sample. Nowadays, we think this is ‘old fashioned’ technology, yet it is still relatively new. Calculus is third, where we are studying systems of equations. The calculator is extremely handy in calc and takes less brain power typing in the numbers. Blaise Pascal invented the mechanical calculator in 1642 but now it has many more features such as the ability to graph an equation or solve equations for you. Biology is next, where we are learning about CRIPR-CAS 9. This technology could forever change the way humans live by changing the DNA base sequence of the DNA of an organism. It gives people with hereditary diseases a hope and a future. School assembly is before lunch. We are able to see the words to the song we sing and the slides to the PowerPoint of the topic talked about with the help of a projector. Eadweard Muybridge invented the first movie projector in 1879, but now they are used for much more than just movies.

When I get back home, from a ‘long day at the chalk face,’ I go to feed my sheep. I get 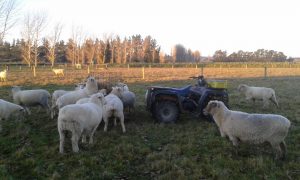 on my 4-wheeler motor bike, which helps me move hay. Edward Butler first imagined the self-moving bike in 1884. Now motorbikes come in all shapes and sizes and are extremely helpful for farmers. Stepping out of the typical Southland rain, I head inside to cook tea. Tea is easily cooked in the electric oven and takes no time or thought. However, from 1906 an electric oven had never been thought of until Lloyd Groff Copeman did. He then manufactured his design and now it is extremely uncommon for someone not to have an electric oven. Electric Ovens were invented to make cooking easier. I sit down in front of the heat pump, which is keeping our farm house mild. The heat pump was first invented by Peter Von Rittinger in 1855-57. He discovered that circulated air could be transformed into heat, making the heat pump.

Sitting here I think about my day and how the different aspects of science have helped my day. Some inventions help us day to day, while others help for specialist activities. All these inventions help not only me but you too, they make our lives much more easier and allow us to fit in more to our day. We take for granted what science and scientists have brought us, without these technologies and inventions our lives would not be what they are today.