In my last blog post (Knowing Your Material) I talked about researching your topic and the importance of narrowing down that research to address a key message (theme) i.e. the `take-home’ message you want the audience to understand about your topic. When 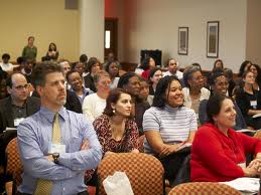 we understand something we don’t just `know’ about it but we ‘feel’ for it – it means something to our overall well-being. So in communicating science we need to not only enhance the knowledge of the audience but also engage their emotions, hence the reason your workbooks are entitled `Touching Hearts and Minds’. With that in mind, in this post I thought we’d focus again on the audience and what you might consider about them as you distil your research into an effective and engaging talk to deliver a strong ‘take-home’ message.
Considering your audience is especially important for a talk that involves science on a controversial or potentially controversial topic.
We should consider our audience for every talk, of course.
Questions you should consider when asked to give any talk are.
Will I be talking to:
• An interest group with a specific viewpoint/attitude to my topic and/or science in general?
• Is there likely to be a specific age or gender or ethnic imbalance in the audience?
• Is our audience likely to already be knowledgeable on my topic?
• How is the audience likely to perceive the organisation I am representing?
As Emily pointed out in an earlier post (The Crowd Goes Wild) a public audience will contain a mixture of  what we could term:-
1. “Science Fans”,
2. “The Cautiously Keen”,
3. “The Risk Averse”,
4. “The Concerned”.
While your museum audience in July is likely to have a high proportion of “science Fans’” and “The Cautiously Keen”, you may also have parents/caregivers, members of public who fall firmly in “The Risk Averse” and “Concerned” categories. I think of these last two categories as  people who come through the door thinking “this topic (science in general) is dangerous and poses a real threat to the health and safety of myself, my family, and or my existing way of life and things I currently value”.
With that in mind I came across an interview with Dr. Craig Cormick who has published widely on drivers of public attitudes towards new technologies.
The five key lessons that come out of his research on public perception of risk are as follows:
1. When information in complex people make decisions based on their values and beliefs rather than on facts and logic
2. People seek affirmation of their attitudes or beliefs, no matter how fringe, and will reject any information or facts that are counter to their attitudes or beliefs
3. Attitudes that were not formed by facts and logic will not be influenced by facts and logic
4. Public concern about the risks of contentious science and technologies are almost never about the science itself and therefore scientific information alone does very little to influence those concerns
5. People most trust the people whose values mirror their own.
What does that mean for us when preparing a science talk on a potentially contentious issue?
Good science communication is “more than information. It’s a revelation based upon information’”

In moulding how we present our information we are always seeking techniques that best acknowledge concerns, value systems within the audience and seek to lead them to that  “Ah hah!” moment when they decide for themselves the positive values of the science you are talking about, rather than `being told’ by you the scientist/speaker. Once you have a base script for your talk we can look at which of the techniques we explored in our workshops and in our workbook might be most effective in making  our presentation engaging, relevant and convincing.  That’s one of creative, fun parts of pulling a good talk together.
Here is  Craig Cormick’s interview:-

It’s quite long, though the interview itself is only 27 mins  there is 18 mins of Q&A  that follows. If you get bogged down after the first 5 minutes of the interview here are some time cues to the more relevant and useful parts of his discussion:
9 min – Affirmation of fringe/whacko ideas and the Google search engine
18 min:32sec – The Role of Trust in influencing public perception
22 min:45sec -The Role of academics/researchers
26 min– Weirdest idea on the internet?
Perhaps the essence of what I’m trying to get across about science communication and contentious issues can be best conveyed in the following quote
“People don’t care what you know,
People want to know that you care”
Dr. Vincent Covello
Centre for Risk Communication