Below is the first in a series of science blogs written by our Year 13 Students.

This one is by Jasmin Mosimann from Motueka High School

With our receivers in our packs and the aerials strapped on the back, we head off on our kiwi hunt into Kahurangi National Park. Although Dad and his three colleagues, Sandy, Robin and Paul are all volunteers for Friends of Flora and have plentiful  experience hunting down kiwi, this would be my first sighting of a kiwi in the wild. Today we would be hunting down Iwa, one of the 40 Roroa/Great Spotted kiwi relocated into the Flora Catchment over 4 separate relocations since 2010. I know that today would be a monumental day, since Iwa is one of the last Roroa to have her transmitter removed for good and to be released back into the wild where she can no longer be tracked or protected. I am excited yet nervous that we will find her at all, as we set off into the still awakening forest. The white huff of dewey moisture hangs low on the forest floor, reluctant to leave. Its damp fingertips trace my exposed arms and legs as it makes its way through the forest, winding its way between the maze of trees, seeking out the coldest, dreariest corners of forest. Spidery tentacles of moss draw it in thirstily as it passes. Like the arms of a giant, silver, mountain and red beech penetrate the rich, moist soil in their desperate reach for the skies, frozen in time to age and allow lichens and mosses to flourish, warts and numerous extra fingers to grow. These noble, majestic giants are now beginning to lose their leaves as the seasons change, littering the forest floor with small serrated leaves ranging from mud brown through to russet orange, pale yellow and lime green. Our footsteps are muted by the spongy wet foliage underfoot, and the rest of the forest is equally still, aside from the odd bellbird chattering in the treetops.

As we approach a river, its persistent gurgling and 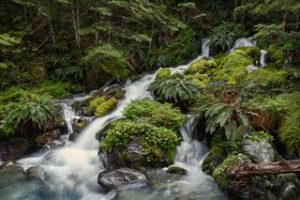 pounding drowns all other noise, yet somehow, in its presence, it is more silent than the gentle hushing of the forest. The swing bridge to the other side is a thin steel contraption, barely wide enough for a person and hanging uncomfortably low over the water. As I cross, I look down into the gushing current through the loose wire mesh beneath my boots,  ripping tightly to the sides as it wavers side  to side. Once on the other side  we carry on and the rhythmic thumping of the vigorous water fades as the sounds of the bush take over again. The cheerful chattering of a fantail follows us as it snaps up the insects which we disturb. Darting left and right, its movements are as sharp as a tango dancer as it thrusts its tail in every possible direction, watching its back wherever it goes. Its boldness and fearlessness is astounding, as it flits about just inches from my head, before landing on a twig in front of me at eye level. It cocks its head at me, incredibly pompous for its size. Its cinnamon chest is puffed proud as it fans and un-fans its tail, attempting to frighten hidden prey into movement. I imagine its life in the forest when I’m not here watching it, building its nest with moss, hair, grass, fern scales and rotten wood fibres before finding a mate and laying its eggs. Feeding its young would mean frantically hunting insects all day, flushing them out from the canopy and bringing them back for its young. Although I know this lifestyle must be challenging, threatened every minute by stoats, rats and possums it seems somehow very serene and free-spirited from my perspective.

The rhythmical beeping of the receiver gets louder and more persistent as we continue up the steady incline. The vegetation here is quite different than that of the valley below, with thinner trees which are spaced further apart. Beech is still dominant, but some prominent alpine species of shrubs are also beginning to show such as the mountain nei nei, a peculiar tree with a wig of spiked leaves at the end of each warped branch, straight out of a Dr Seuss book. With the antennae plugged into the receiver and the volume on ‘high,’ I hold the cobalt blue antennae above my head, moving it from left to right. Turning back to the left, the beeps become closer together, indicating that the kiwi is on this side of the ridge. We carry on up the hill for another 500 metres, until we are directly uphill of where we expect the kiwi to be. From here on we must be as silent as possible, as not to awaken her in her burrow. Luckily the dampness of the forest helps dull our footsteps as we head off the path, weaving between trees and over fallen branches as we move down the hillside. Now that we are in amongst the trees without a trace of humans or a track, it is difficult not to be intimidated by the vastness of the Kahurangi, the blanket of podocarp forest draped over the hilltops, down into the countless valleys, spread all the way to Karamea on the coast.

As the beeping of the receivers get louder, we turn the volume right down and hold them to our ears, whilst trying to pinpoint her burrow. Once we think we have the right tree trunk, there is a mad scramble to find all of the entrances into the burrow and block them so that she can’t get out. Once we have her trapped, it takes a lot of digging into the decaying tree and deep into the umber soil so that we can flush her out to the main entrance, and Dad can catch her. He grabs her by her legs, with one finger between them so that they don’t rub together to prevent injury. Once she is safely out, he cradles her in his arms so that Sandy can measure its bill, which is used to help determine Iwa’s gender and age.

Although all of the kiwis in the project have been recaptured every year to replace the batteries in the transmitter, the beaks of kiwi grow significantly over short periods of time. Her weight is also measured, an astounding 3.45 kg the heaviest kiwi in the project, a pleasant surprise indicating that she is well nourished. Once all of the measurements and inspections have been completed, it is time to remove her transmitter. As Sandy slides the scissor blade between Iwa’s leg and the tape holding the transmitter, I think of how monumental this is for the kiwi and for the 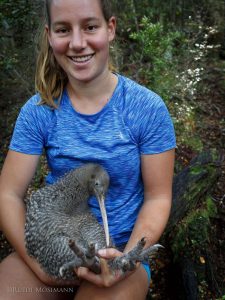 project. The amount of time and effort which the whole project has required is significant, and now it is all coming to an end.

The kiwi introduced to this area will only be able to be traced by acoustic recorders to monitor the approximate number of kiwis still in the Flora Catchment. Once the transmitter is off, Iwa will only be identified by a small metal band around her ankle. She will now be free! Once Sandy has cut it off, she asks if I  would like to hold her, so like I had practiced the day before with my dad on one of our chickens, I put my hand around her legs, with one finger between, and hold tight. Cradling her with my other arm, I’m surprised by the large size of her feet and claws and how soft her feathers are,  reminding me how fragile and vulnerable she and her species are. As she relaxes into me, and the warmth of her small body fuses with mine, I think of how special this moment is, and if this will still be possible in the future. Out here, the landscape  constantly reminds me how small and insignificant I am, yet isn’t judgmental or vindictive.

The seemingly insignificant forces of wind, rain and ice carve the rock and sculpt the landscape, yet the flora and fauna learn to adapt, forever changing and evolving. This is a place that I hope a girl just like me hundreds of years in the future can still experience, with its same raw natural beauty.