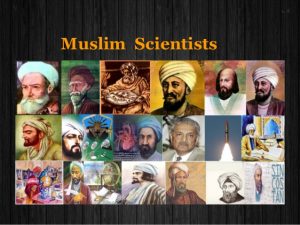 reflecting on the significant contribution to science made by the Islamic culture.
The brutal and tragic massacre of innocent civilians in a Christchurch Mosque on 15 March 2019 is a sad and sobering reminder of our capacity for extreme intolerance of a belief system other than our own.
As a species we seem to embrace belief systems. There are estimated to be over 4,000 belief systems or religions across the globe with nearly 75% of humankind practicing one the five most influential religions of the world: Buddhism, Christianity, Hinduism, Judaism and Islam.

Science, on the other hand is not a `belief system’ but a process – a problem-solving approach we call the `scientific method’:-

1. Make an observation.
2. Ask a question.
3. Form a hypothesis, or testable explanation.
4. Make a prediction based on the hypothesis.
5. Test the prediction.
6. Iterate: use the results to make new hypotheses or predictions.

As such it is universal – a universal process we can apply to help us unravel the mysteries of the world around us.
Many exponents of the scientific method may themselves be religious. There is no contradiction in that. Science is a process.
“The father of the Big Bang theory was actually a Catholic priest, the pioneer of modern genetics was an Augustinian monk, or the decoder of the human genome converted from atheism to Christianity in his 20s“

The world of science owes a great deal to the Islamic culture.

Long before the European Enlightenment, scholars and researchers working from Samarkand in modern-day Uzbekistan to Cordoba in Spain advanced our knowledge of astronomy, chemistry, engineering, mathematics, medicine and philosophy.*

So I thought I’d make today’s blog a brief celebratory foray into the world of famous Muslim scientists.

Here are just 10 who made a significant contribution to the world of science, our world over the last few hundred years.

1. Jabir ibn Hayyan: 721-815 AD
“Father of Chemistry”. His text on chemistry and alchemy laid the foundation of modern chemistry
2. Ibn al-Haytham: 965 AD
Astronomer, mathematician, and physicist. Invented the Pin-Hole Camera.
3. Al-Biruni: 973-1048 AD
Scientist, mathematician, physicist, astronomer, and natural scientist.
At the age of 17 he calculate the latitude of his village. Calculated radius of the Earth.
4. Al-Kindi: ~ 805-873 AD
He was the first to discover sound waves.
Wrote 260 books on various subjects &was expert in several subjects like, physics, math, astronomy, geography, music, and especially philosophy.
5. Ahmed Zewail: 1946-2016
Nobel Prize winner and “father of femtochemisty”.
6. Abdus Salam: 1926-1996
First Muslim to receive a Nobel Prize in science for his contribution in electroweak unification theory
7. Ibn al-Nafis: 1213- 1288 AD
He was the first who fully describe the pulmonary circulation of the blood.
8. Aziz Sancar:  Born 1946
Nobel laureate for his work on DNA repair
9. Ali Javan: 1926-2016
Quantum Physics and Spectroscopy. Co-inventor of gas laser 1960
10. Omar Khayyam: ~1048-1132 AD
As well as being famous poet he solved and classified cubic equation. His method was largely based on geometric solution and his solar calendar was one of the most accurate.
(See the references below if you want to explore further)

What are the most widely practiced religions of the world?
Big believers: Dr Stephen Juan 6 Oct 2006
https://www.theregister.co.uk/2006/10/06/the_odd_body_religion/

How the scientific method is used to test a hypothesis.
Kahn Academy
https://www.khanacademy.org/science/high-school-biology/hs-biology-foundations/hs-biology-and-the-scientific-method/a/the-science-of-biology

First worldwide survey of religion and science: No, not all scientists are atheists
Phys.Org Dec 3 2015
https://phys.org/news/2015-12-worldwide-survey-religion-science-scientists.html

Are religion and science always at odds? Here are three scientists that don’t think so
Anna Salleh ABC Science 24 May 2018
https://www.abc.net.au/news/science/2018-05-24/three-scientists-talk-about-how-their-faith-fits-with-their-work/9543772

This entry was posted in For Teachers, General by STEPHEN BRONI. Bookmark the permalink.