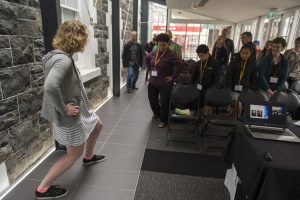 Anyone who has ever done any public speaking knows that 5 minutes can go by in a heartbeat, or feel like it takes a lifetime to pass.

As we rocket towards our Science Academy student presentations at the New Zealand International Science Festival, we have been thinking about audience engagement and what our students can do to maximise this. Engaging the audience and knowing they are “along for the ride” can help that 5 minutes fly by in a pleasurable rush.

As I mentioned in a previous blog, there are really four groups that the public can be divided into when it comes to Science Communication:

The Science Academy students are presenting their work to the public as part of the New Zealand International Science Festival. I think it is safe to assume that their audience will be from the first two groups as it is unlikely that someone who is not engaged in learning about Science would take the time to attend a Science Festival.

So that means that we are at least starting with a friendly audience. This is a big plus. It is much easier to engage the audience if they are in the audience because they are interested in what is being presented and genuinely want to learn more. The audience is already on the students’ side.

Building another idea from another blog I wrote last year, to engage an audience, you need to:

There are a few more ideas that need to be touched on for successful audience engagement. Firstly, language – everyday vs for experts. The audience wants to learn but they don’t want a PhD thesis on the topic. The audience needs to understand what you are saying. In a five minute presentation to a public audience, the jargon should be at a minimum needed to make your point.

Frame your audience questions for maximum response rate. It is much easier for your audience to think of something general rather than specific. For example, asking them to think of a good experience they have had with Science rather than asking them to think of the best experience they had with Science. Linked to questioning, make sure you leave enough time for response – sometimes the audience needs to warm up or think about what you have said. Don’t let a lack of response cause you to panic and rush on before the audience has had a chance to respond! Equally, think about what you will do if you do NOT get the response you were expecting – have a back-up plan! The audience can still be engaged depending on how YOU respond to their unexpected, or lack of response.

Finally, make sure you acknowledge the audience contribution, thank the audience for coming along on the journey with you and participating. The audience will leave feeling appreciated and valued for coming to your show.

This entry was posted in General, Science Communication by EMILY HALL. Bookmark the permalink.