The Food of your Future

Who doesn’t enjoy a perfectly cooked salmon with a freshly baked loaf of bread. Mmmnnmmm! I know I do! This seafood that we know and love is becoming increasingly popular in our diet, but will it be the same for our grandkids – will it last?

In 1989, research began on the AquAdvantage Salmon which scientists claim can reach market size almost twice as quickly as normal salmon. The creation of AquAdvantage salmon begins with the selection of two DNA sequences: one from a Chinook Salmon ; the other from an eel-like fish called the Ocean Pout. 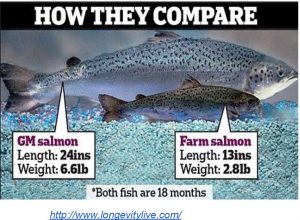 The Ocean Pout lives in the near freezing waters of the North Atlantic Ocean. The growth hormone gene from the fast growing Chinook Salmon is combined with the antifreeze promoter of the Ocean Pout (a promoter is a sequence of DNA that ‘turns on’ a gene). By genetically joining these two DNA sequences, scientists are able to create a gene that keeps that internal, fast growing, hormone factory switched ‘on’ during those cooler winter months. Something that salmon normally do not do. This means that they can be farmed year-round and in any climate. Resulting in a fish that reaches market size in just 18 months rather than three years for normal salmon. These are the offspring intended for our dinner plates on those warm summer evenings.

This AquAdvantage Salmon is the very first of its kind. Never before has a genetically modified animal been approved for human consumption. In 2015 the United States approved the production, sale and consumption of the AquAdvantage Salmon. Many other GM animals have been developed and tested but politics and public fears have kept them off our dinner plates. The FDA claims that this salmon will have no effect on consumers … that’s you and me … and will look, feel and taste just like a normal Atlantic Salmon, which is what we all want.

The company that produces AquAdvantage Salmon believes in sustainable seafood production. They claim that their product is better for both consumers and the environment. The Salmon will be raised in land based farms, meaning that there is no risk of escaping salmon entering wild populations and no risk of diseases spreading out of containment. All waste water is filtered extremely well and reused; the small amount that is not required is cleaned of all contaminants and used on nearby tomato farms as fertilizer.

GM salmon use roughly 20% less feed then normal salmon, therefore making it a whole lot cheaper to feed them. Also these AquAdvantage salmon are grown in land based systems close to the production factories. This eliminates the cost to transport them to the place where they cut them up. This has created a salmon that is just as tasty as a wild one but costs a whole lot less to produce.
Business man, Brendan Borrell, claims that the normal salmon cost almost $1.50 to make whereas the AquAdvantage Salmon has a cost of less then $1.00!
A major environmental implication of farmed salmon is the increased preservation and protection of wild populations, populations that have been in decline since at least the 1950’s. By eliminating the need of wild salmon commercial fishing and introducing more land based farms, many threats to the wild salmon are removed. Currently these threats include reduced food supply caused by over-exploitation of the salmon feed, parasites
spread by water based fish farms and destructive fishing techniques. By introducing land based systems such as the one used by the AquAdvantage Salmon, the wild salmon will be protected from these threats and be allowed to live their lives largely uninterrupted.

David Suzuki, Canadian academic and environmental activist, feels very strongly about GMO’s. For years he has been promoting outright bans on GMOs, despite the fact that many scientists have declared them perfectly safe for all of you to consume. He and other anti-GMO activists have been able to stall crucial experiments with GM crops that are designed to improve yields and nutrition, which would benefit poor people around the world.

Ronald Stotish, chief executive of AquaBounty, also claims that the main advantage of the salmon is that the fish can be grown in tanks inland, greatly reducing the effects on the environment. “Demand for global protein is increasing,” he says. “We have to do a better job and we have to do it efficiently.”

Now then, I know those of you that get out
there and have been to South Westland
Salmon Competition, you will know just
how little fish are around. In fact, just in the last few months, I have been out chasing
salmon on the Waitaha River several  times. Even though I have had no luck recently, I thoroughly enjoy the feeling of a wild salmon fighting with your line. This is a feeling that I strongly want our future generations to experience.

Personally, I am all for the Genetically Modified AquAdvantage Salmon.

From my research, I think that it is an incredibly well thought out process that takes into account all the various viewpoints. I was especially impressed with its environmental impacts. In order for one of the prime cattle beast from your local dairy farm to put on just 1 kg of body weight, it requires 8 kg of food. Whereas a GM salmon needs just 1kg of food to put on 1 kg of body weight. This shows that the salmon is among the most economically sustainable protein source for humans. All of a sudden this GM salmon has become one of the few animals that puts on weight in equal proportions to its feed. However, currently the NZ ministry for the environment does not allow you and I to purchase and enjoy any fresh meat, fruit or veg that is a GM product. I think that they should change their stance on this. If we can convince them to allow the sale of AquAdvantage Salmon here in our hometown, then we would be giving the wild populations of salmon in our local rivers a much better chance of surviving. I am talkingabout the Wanganui, the Waitaha, the Whataroa, the South Westland fishing competition. All of these places will be able to host a larger population of salmon for your future generations to enjoy. 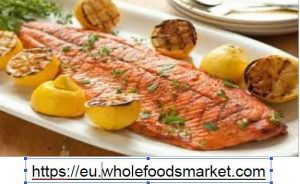 This entry was posted in Biology, General, Genetics, Speciation by STEPHEN BRONI. Bookmark the permalink.