Incels ‘cash out’: gendered violence and the economies of hate

A post written by Jazzlin Carr, based on an ANTH424 assignment.

“He doesn’t seem like that bad of a guy. He just seems hurt, like he just wants a friend or support. I always thought incels were really bad people, but he seems like a good version of them.”

I looked over at my very liberal, ultra-feminist, Jacinda Ardern-loving partner in disbelief. We had just finished watching a YouTube video from the channel Jubilee entitled “I’m An Incel. Ask Me Anything.”.[1] The short clip features a self-proclaimed incel responding to questions from the public. While his identity is hidden from those asking the questions, he is shown to the camera.

A screenshot of the Youtube video “I’m an Incel, Ask Me Anything” posted by Jubilee. In this particular frame, a woman appears to be pointedly interrogating an incel named Derrick, whose demeanour and open palms facing up depict a certain passivity and openness. Source: https://www.youtube.com/results?search_query=incel

An incel, otherwise known as an “involuntary celibate”, is a self-imposed label used by mostly young males who define themselves by their inability to secure romantic or sexual partners despite having the desire for them, often attributing this to their anxious or shy behaviours, women’s high standards, or their unattractiveness or below-average characteristics. [2] They are most often found in online forums, where discussions are often characterized by self-loathing, resentment of more attractive males (known as “Chads”), and misogyny.

This definition, however, is fluid depending on who you ask. As one incel claims in his blog, anyone can be an incel “as long as they show signs of […] struggling with attaining romantic relationships”. [3] Others, myself included, would characterize the self-radicalizing nature of incel communities as a key part of the definition. Take a scroll through one of the few incel chatrooms that have not been blacklisted from internet servers and you’ll be hard-pressed to find a single discussion that does not dehumanize women, promote racist ideologies, encourage violence, or celebrate incels who have murdered women out of spite. [4]

You may not have assumed such a thing if your only portrayal of incels is from the Jubilee video I noted above. The incel featured, named Derrick, coolly responds to a variety of questions. He reacts to leading questions with calmness and ensures the interviewers that he is there “to give more of a positive light on [the incel] community”. He discusses his mindset, believing that “promiscuity leads to increased standards in more primitive aspects such as looks and that typically makes it harder for some people to find relationships” and generalizes this to cities such as “[Los Angeles] or London, or in Auckland, New Zealand”. He notes that it was “constant years of rejection” that led him to more “radical beliefs” which he equates to “old beliefs”. It is also noteworthy that he was very quick to say that he condemns the actions of mass murders identifying as incels. Instead, he thinks “the reason why they committed those actions was […] desperation, or […] mental problems.”. When watching the video again, I can understand where my partner’s empathy to Derrick comes from. His demure presence, calm responses, and position as a “traditionalist” who has been hurt time after time again presents a convincing case towards justifying the incel perspective as a matter of difference of opinions, or a wounded community seeking internal support.

But what is the actual impact of this point of view, on the lives and bodies of women? I turn to the writing of British-Australian scholar, Sara Ahmed, to explore this:

“It is the failure of hate to be located in a given object or figure, which allows it to generate the effects that it does” (2004, p49).

In her book The Cultural Politics of Emotion, author Sara Ahmed discusses the organization of hate, and considers its circulation as both a defence mechanism for those who see another body as a threat to something they love, as well as its impacts on the figures who have been aligned by the narrative of hate as the “common enemy”. [5]

Her analysis seemed fitting for this topic and applying it to the performance of incels has me wonder if it may clarify why Derrick’s narrative could almost seem, dare I say, justified.

In a chapter on hate, Ahmed’s overarching theme is that hate operates as a sort of economy. Essentially, hate is fluid and moves between bodies and signs, and is not fixed on one subject. If an incel posts a rant on a chatroom about his displeasure with a woman who rejected him that day, the specific woman involved is simply a “nodal point in the economy”. The hate has another origin and destination, one which is more broadly connected to the perceived threat towards something the incel desires. In this instance, it may be their desire for a relationship and feeling loved. From this perspective, the hate’s origin was not in the encounter with the individual woman, but rather in years of rejection. The destination of that hate is not towards her, but rather, to a common body of women which the incel deems as a threat to ‘traditional’ relationships that they wish to participate in, but feel they are blocked from. In this example, we see how an incels hate is economic.

It is this inability of hate to be fixated that allows it to grow and fester in these groups. The vagueness of the enemy allows for particular narratives to be applied to any individual who may appear to be a part of that group.  In the case of the incels, any woman could therefore fit the narrative as being a threat to traditional relationships.

But how does this economy of hate affect the bodies of the group considered a “threat”?

“There can, in fact, be no hatred until there has been long-continued frustration and disappointment” (Glenn Allport, in The Nature of Prejudice, quoted by Ahmed 2004, p50).

Derricks relatively innocuous comments contribute to the investment of hate towards women by furthering a narrative that their desire for more liberal roles and modern lifestyles is raising their expectations of men to the extreme, so that more traditional or less attractive men can no longer find relationships or love. For one, it is rhetoric that seals female bodies as objects of hate. This kickstarts a chain of effects that promote and support violence. It contributes to real physiological symptoms for those who must live in these bodies in a number of broader ways too. This is evident in the below photo, selected by Stuff for its news article on the event in 2015, which depicts the consequences of incel behavior on women who are not direct victims of its violence, who instead may suffer from fear, post-traumatic stress disorder, nightmares and anxiety 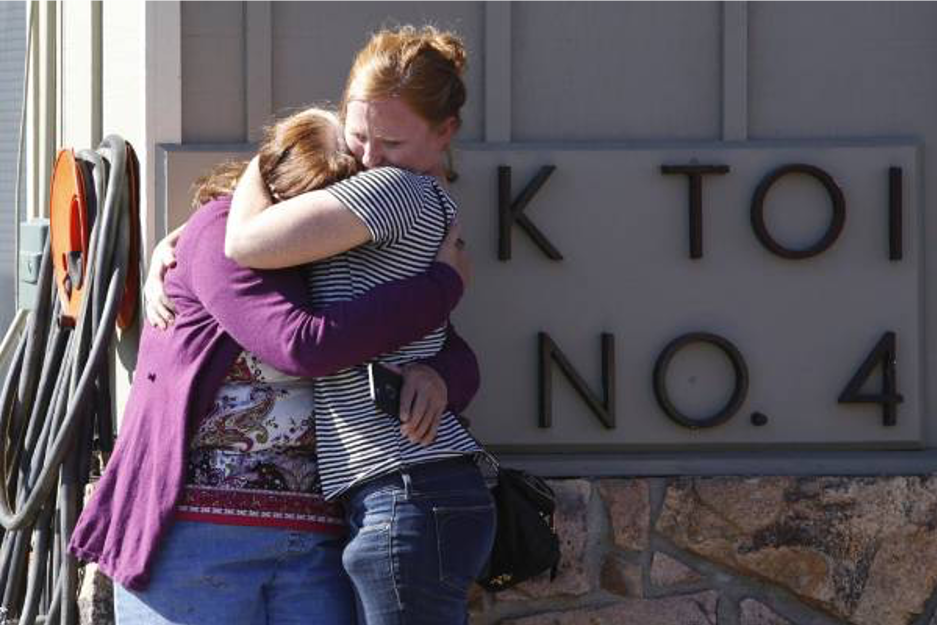 Two women comfort each other following the Umpqua Community College in Roseburg, Oregon. This attack killed 10 and injured eight others. The attacker was an incel, who expressed sexual frustration and blamed women’s standards for his virginity at age 26. Credit: Steve Dipaola/Reuters. Source: https://www.stuff.co.nz/world/americas/72625797/10-dead-in-shooting-at-umpqua-community-college-in-roseburg-oregon

If hate is an economy, it also performs as a form of capital. The effect of an incel’s hate does not reside solely in the individual object of their displeasure, but rather accumulates over time. I would take Ahmed’s imagery of hate as an economy a step further, and argue that is when these investments pile up and a member of the threatened community tries to “cash out” on this accumulated capital of hate that violence is used as a defence against the hated bodies. The collection of testimonies of rejection, frustration, and disappointment found on these incel chat rooms becomes so overwhelming that an incel feels justified in reacting with violence, in the same way as a person who has accumulated savings may feel enticed to splurge with the surplus.

The investment of hate on these chatrooms is made evident in the justification of violence on  women when researching any of the major incel-led terror attacks of the past couple decades. After a one self-described incel posted a 137-page manifesto to a chatroom in 2014, he would thereafter kill six people and wound fourteen more in Isla Vista, California. The reaction from the online incel community was one of praise; his face quickly photoshopped onto Christian icons, and his name being associated as the “primary incel ‘saint’”, a reflection of how they believed he was the saviour of incel values. [6] In 2015, an incel in Oregon shot and killed nine classmates and a professor, and injured eight others, in what he described in his manifesto as the reaction of his frustrations to being a virgin at 26. The reaction from the incel community was one of support and empathy, with one user commenting a poem, reading “society failed him/it’s not his fault/don’t blame him/he was the hero we deserved.”. [7] 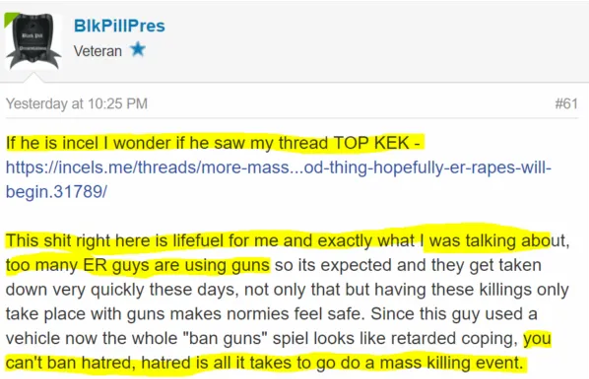 A screenshot taken from an incel forum in August 2020. The commentator notes how the van attack in Toronto was “lifefuel” for them. They go on to note preferred methods of killing in “ER” attacks, a popular incel abbreviation for violent attacks. “ER” is a reference to the initials of the “Saint” of the incel community, the Isla Vista killer. Source: http://wehuntedthemammoth.com/2018/04/24/incels-hail-toronto-van-driver-who-killed-10-as-a-new-elliot-rodger-talk-of-future-acid-attacks-and-mass-rapes/

In 2018, an incel in Toronto, Ontario used a rented van to kill ten victims and injure an additional sixteen, as a form of revenge for perceived sexual rejection from women. Most clearly evidencing the use of hate as capital for the incel community, one commentator on a chatroom posted “This shit right here is lifefuel for me”. [1] 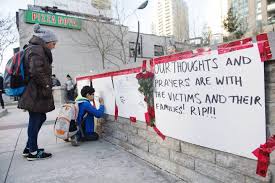 A photo (taken 24 April 2018) of the impromptu memorial created by local residents after the Toronto Van Attack, where a man drove along the sidewalk for 2 kilometers, purposefully hitting as many pedestrians as it could. The perpetrator posted on his Facebook account shortly before the attack, with a statement referencing a man considered to be the “Saint” of incels. Credit: Quentin9906. Source: Wikimedia Commons.

The original quote from my partner, that opened this blog, shows how important it is to grasp the economy of hate. Even though my partner did not agree with Derrick’s views, the empathy he felt for him could be a slippery slope into justifying the mindset of an incel, thus giving their alignment of female bodies as a threat imagined ground.

The accumulation and investment of this hate is what contributes to not only the everyday pain and victimization of women but leads to the in-group justification of violent expressions of hate, performed in terror attacks such as those mentioned above. In recognizing the performance of hate as an economy, one can work to actively question its impacts and limit the influence one perspective may have on the incel community.