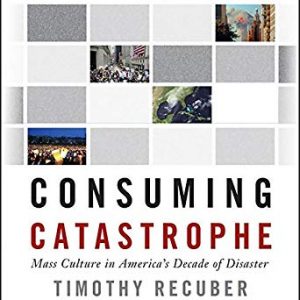 I recently read Sociologist Timothy Recuber’s (2016) book, Consuming Catastrophe: Mass Media in America’s Decade of Disaster. It is a great book, and I loved it particularly for acknowledging that media is not just informational, but involves aesthetic and performative cues for emotional response. Recuber draws on case studies of 9/11, and Hurricane Katrina, among others. His writing is specific to the USA and acknowledges its scope as such.

As an Antipodean social anthropologist, I am struck by the need for a cross-cultural and de-centred lens on these topics. There is space for ethnographic studies that highlight the locally situated nature of disaster and disaster-response – the way the narratives, symbols, words and meanings that make sense of catastrophes around culturally grounded and particular,

Black Saturday: reviewing art on the anniversary of disaster

Last week I attended a talk by Dr. Grace Moore, called ‘The Art of Recovery’. Before moving to Otago’s English Department, Dr Moore worked with the ARC (Australian Research Council) Centre for Excellence for the History of Emotions, her research focussing on fire in Australian historical writing and art. But timing and location meant her response also engaged heavily with the devastating Victorian bushfires of ‘Black Saturday’, in 2009. On this 10-year anniversary of the event, she presented some pieces from a collection of art created by survivors.

Dr. Moore’s work makes some fascinating comparisons between this, and 19th century European colonists’ narratives and paintings of bushfire. As such she has been able to highlight some of the moral frameworks and social relationships (i.e. heroism, mateship) that have made sense of bushfires in a culturally-specific way. She notes also that there is a rich tradition of depicting fire among many indigenous Australian communities, which would beg deeper research.

The connection between Moore’s talk and Recuber’s book struck me, in that both addressed representations of disaster (and its aftermath), and also that both discussed the role of emotion and affect as they circulated through particular mediums of communication.

Emotion and trauma: inside, outside, on the page and screen

In Dr. Moore’s talk at the Dunedin Public Art Gallery, art was framed as something used to ‘confront’ and ‘work through’ trauma. It is ‘cathartic’, and ‘therapeutic.’ The vested interest in such processes, after trauma, is not entirely individual. Amidst controversy about accountability and the inadequacies of long-term support, Grace noted the investment of local government in programmes that allow people to ‘channel their emotions’. 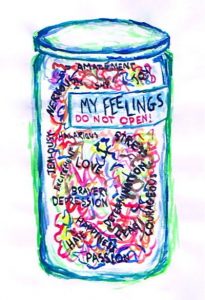 I could also say a lot here, from an anthropological perspective, about the culturally-grounded metaphors of emotion that this all relies on, and in particular the hydraulic metaphors of emotion. These are central to psychodynamic frameworks that emphasise the destructive potential of un-expressed (‘bottled up’) emotions, and the moral and therapeutic values of sharing (‘venting’) emotion.[i]

I have also written about the distinction between ‘channel’ and ‘vessel’ metaphors of emotion.[ii] In this case I think it is the intersubjectivity of affect that the frequent appearance of ‘channel’ metaphors hint at. They highlight art as not only a personal process but a relational one, a channel for survivors to connect with other people who were not present, across what is often framed as an ineffable void of experience. 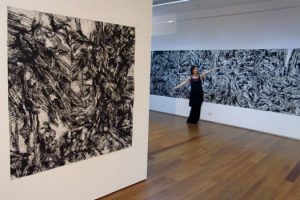 Alternatively perhaps the art itself is the vessel, the receptacle, which holds the emotion channelled into it. Indeed Moore noted that emotion and memories are “embedded” into the work. Regional exhibitions focussed on ‘Recording and Collecting Black Saturday’ and the longer-term efforts of DAX Centre to collect these works (and others by victims of broadly-defined ‘trauma’) could be analysed through this lens. It certainly opens up some interesting questions:

There is considerable work still to be done examining the ‘moral economy’ of disaster communication: in mass media, and social media. Recuber’s book includes some particularly interesting work on the ‘digital archives’ that formed around the 9/11 and to Hurricane Katrina. It occurs to me that these, and the exhibitions and collections Dr Moore on, can be seen as a deliberate (and ‘high culture’) institutionalisation of the spontaneous shrine that is increasingly a mark of postmodern collective grief.[iii]

Drawing close to the flame: Empathy and its limits 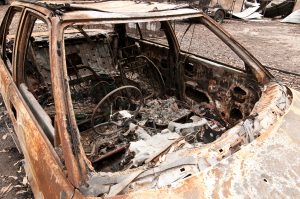 A burntout car at Kinglake after the Black Saturday bushfires. Image source: CSIRO.

Recuber talks about the ‘aura’ disaster has; the ‘haunting traces of the real’ that it leaves (p16, 26, 90). Are these possible ways to understand the social practice of collecting and preserving ‘trauma’ art?

Recuber’s idea of  ‘empathetic hedonism’ also recalls itself here– “in which the desire to understand the suffering of others is pursued doggedly, through always necessarily unsatisfactorily.” (p9).

Recuber notes particular kinds of ‘stylized and idealized’ empathy evoked by mass media coverage of disaster in the contemporary USA (p19). Once again I believe comparative attention to locally situated forms of empathetic engagement in other places would be beneficial. There are undoubtedly some differences, for example, between the capitalist performative merchandise Recuber describes around the Virginia UniTech Shooter, and the patterns of charity, volunteerism, and witnessing/spectatorship specific to Black Saturday. 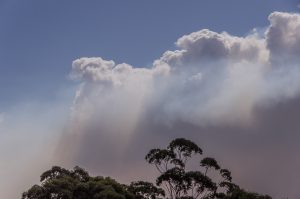 Stories (including Dr Moore’s own) of watching weather changes in nearby cities create what appears to me to be a distinctive, embodied, and locally-grounded experience of witnessing, mediated by the sight, smell, and taste of smoke.

In examining art made by children’ affected by the Black Saturday bushfires, Moore also poignantly highlighted the way their experience was often mediated by windows – in cars, as they fled, or in schools where they lived with constant view of devastation after the event. Windows featuring in art are indicative of “intensity, shielding, seeing” she points out. This alludes to a bigger question in the communication of catastrophe –  the value (and risk) of seeing. Of empathy itself. The question of vicarious traumatisation.

In my own work with youth workers in Canterbury, after the Christchurch quake, metaphors not only of vessels and channels, but also of boundaries, were common in the stories of care, emotional labour, burnout and compassion fatigue I recorded. 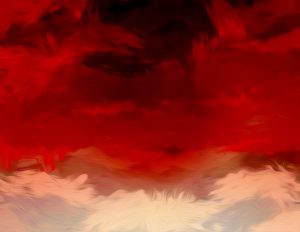 Moore’s talk, I noted, included art by one psychologist who counselled survivors of Black Saturday and framed her art around experiences of “emotion oozing red and sad”. The ‘contagion’ model of emotion is heightened when it is extremely traumatic circumstances in question.

Sometimes keeping the channels, the windows, ‘open’ is experienced as dangerous, overwhelming, even when there appears to be a moral imperative to do so. Other times the desire to draw closer to disaster seems to overcome the distance that is safety. But all of these responses occur in situated local worlds – with their own history, their own geography, and their own socio-political contexts, as Recuber and Moore variously highlight.

In emphasising context and comparison, the anthropological lens has value here too. I am eager to see more work that ‘grounds’ disaster, and the communicative practices it generates, in this way.

We are ritual creatures 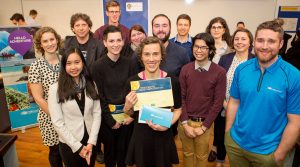 The 3 Minute Thesis competition is a lively annual event. This year Marshall Lewis, a Phd student in Otago’s Social Anthropology programme, competed in the University finals. We thought we’d share the content of his excellent presentation on ‘Ritual Design’ with you! …

“If you have goals that are important to you – and I bet you do – then you may want to design your rituals to support your goals. That’s the main idea behind my project.

So, very quickly: what do I mean by ritual, why use it and how might we design ritual? 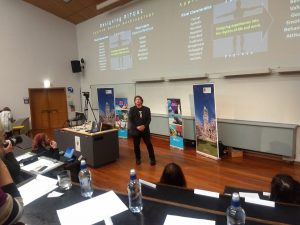 Why is life so ritualised?

Ritual scholarship is extensive and contentious. I’m focused on two basic propositions: First, there are discernible, family characteristics of ritual – some listed here – and secondly – and here’s why you should care – rituals work. Experimental psychologists have been demonstrating what coaches and drill sergeants have long known: rituals have real impact. For example, they can decrease anxiety, reduce grief, alleviate disappointment. Essentially, they can align and reinforce our beliefs and values.

And knowing that rituals work is real and useful knowledge. What might it look like to take this knowledge seriously: to apply ritual as a strategy or technology to support one’s goals and aspirations? That’s what my project is about. I am applying insights from the interdisciplinary study of ritual — from anthropology, organisational studies and religious studies – to do three things: to defend a conception of ritual as something to be designed; to evolve a practical method for designing ritual, and to apply this method in real-world environments. 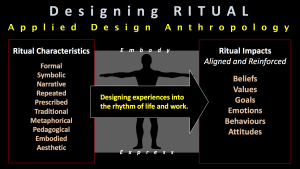 Competitors in the 3 Minute Thesis competition are allowed a single powerpoint slide to accompany their 3-minute presentation, and this was Marshall’s image.

Secondly, my youngest daughter is starting law school later this month, and she’s designing rituals to help maintain a healthy lifestyle during that period of intensity.

The ritual design method is straight forward, although far from easy. First, clarify your goal and the beliefs and values you want to reinforce (easier said than done!). Then, you design your rhythms and activities using the key characteristics of ritual as design principles. It’s a creative process, though analytically derived.

We are ritual creatures. Ritual is one of the key strategies humans use to bring some order and method to the challenges and chaos of life.

Good luck with your goals!  And consider how your rituals can support you!”