The suffering of war, the eye of the beholder

A post written by Samuel McComb, for an ANTH424 assignment on ‘visual images and the communication of suffering and evil’.

I love art. Creation in different forms has provided me with an outlet where nothing else can, and exposed me to works that have not left me to this day. Some I have carried lightly, while others remain as haunting as the first time I laid eyes on them.

One particular image has remained with me in a way others have not. It sits clearly in my mind’s eye. Without demanding focus or derailing the bustle of other thoughts, it simply reminds me of its presence with a whisper – “I’m still here”. For years I have held space for it, maintaining an uneasy truce. Decontextualized, it could do no harm nor be put to rest. But upon its most recent resurgence I felt compelled to understand more. I could not have predicted how thoroughly this discovery would challenge my perception. 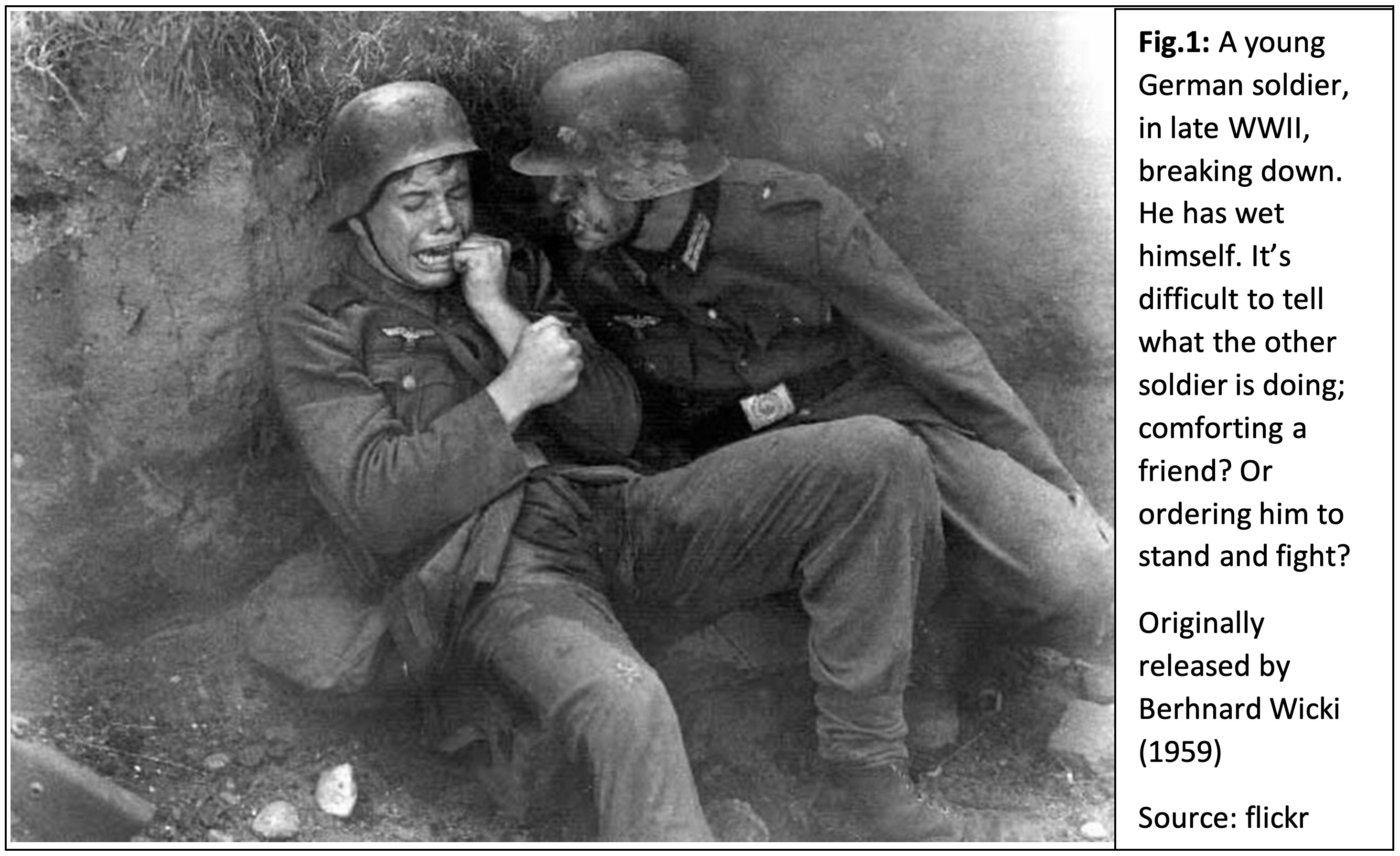 My familiarity with this image harks back to my high school years. I was around 16, or perhaps 17, and in the midst of what one might describe as a period of healthy teenage angst, channelled and encouraged by an art department with an affinity for the grunge aesthetic. A plastic skeleton lived in the corner of the art room. The gift of a perfectly mummified cat (found when a neighbour’s house was relocated) received promises of “Excellence” grades for the year’s NCEA assessments. One lunchtime, two friends and I made the plastic skeleton a cardboard house, in the middle of the classroom. It was in this environment that our subject matter would be deconstructed, remade and distorted as we explored our theme; War.

Paul Frosh (2016), a media and communications researcher with the Department of Communication and Journalism at the Hebrew University of Jerusalem, made a strong argument that our ability to respond morally when witnessing suffering is shaped by how we view it – the medium used in its portrayal changes how we engage our senses. His conclusions are drawn from an analysis of user experience with Graphical User Interfaces (GUI’s) of smartphones and computers when viewing Holocaust survivor testimonies . These provided clear examples of how the experiences and actions we take when witnessing suffering shape our response.

Frosh then considered the moral obligations of the viewer when witnessing and responding to suffering. He divided these responses into three types: attention, engagement, and action. This was a useful framework within which view my own interactions with, and responses to, suffering, and specifically to explore how this raw image (fig.1) became the work I presented in my high school art folio (fig.3). 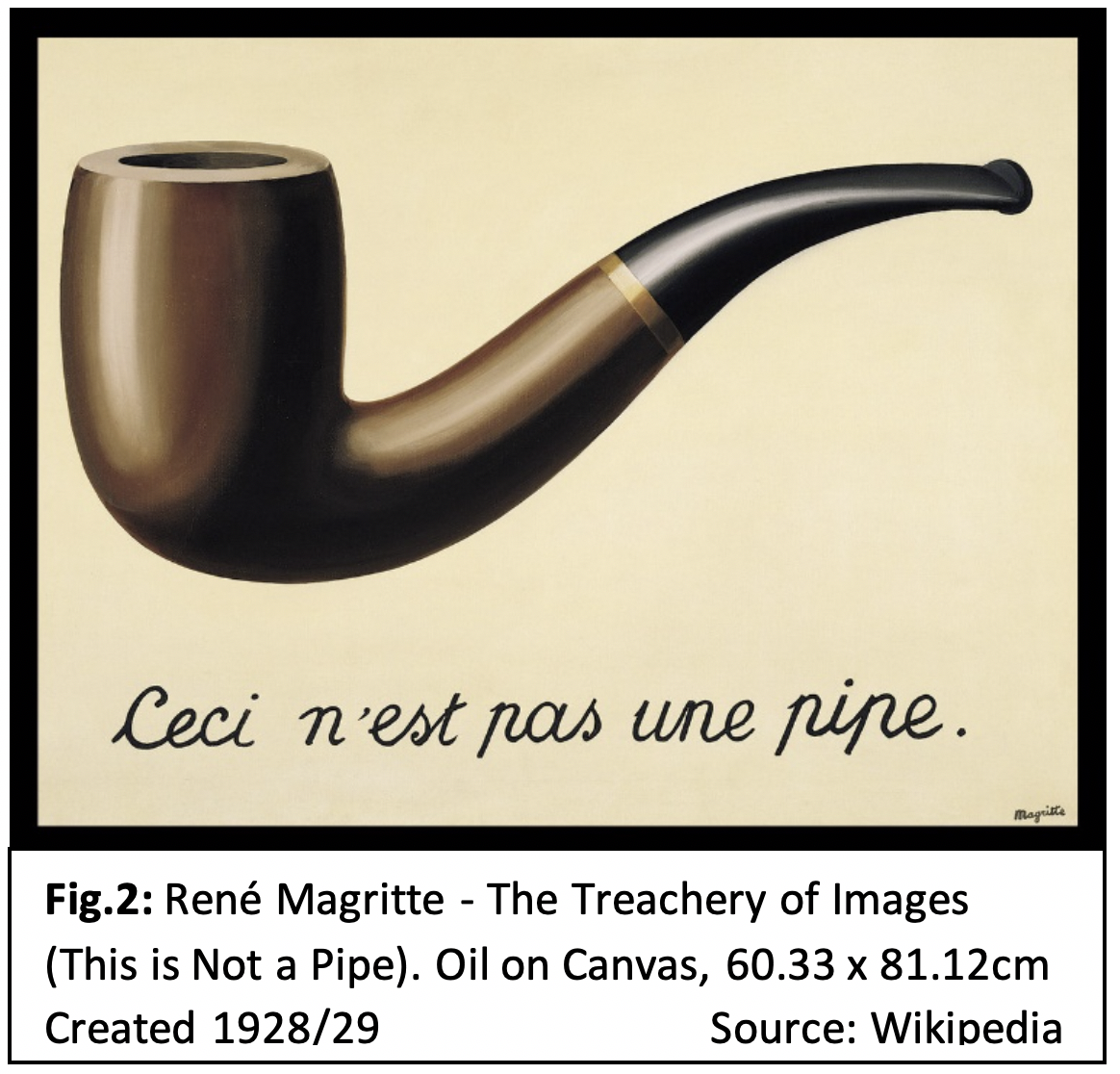 René Magritte famously captioned his pipe painting ’This is Not a Pipe’ (Fig.2); in other words, an image is not the object it represents. This is an influential idea in semiotics and fundamental to art.

As I began my project, I was searching for images and shapes that represented an idea or a feeling. I first saw the soldier while shuffling through a stack of photocopies collected from old books and internet searches. These photos of medals, memorials, soldiers and statues had been carefully selected by the teacher to help us explore our theme. I recall that several images had been ripped by other students fighting for the ‘cool’ pictures – the ones with the biggest guns – by the time I began my search.

On one level these were just raw materials, no different to any other aesthetic resource provided by the teacher. Yet just as Frosh (2016) argued that how we access depictions of suffering plays a major role in our responses, the way I was searching for images shaped my response. I was holding history between my fingers, taking just enough time to gain some perspective of the content as I shuffled through the photocopies, before passing the stack of unsuitable pictures to the boy beside me. I could almost forget the reality behind the paper as I traced shapes overtop of figures, the smooth monotony of the paper interrupted by creases and rips as I thought of textures and colours to represent what I felt each copy contained. After the preliminary search, every raw image was subject to a deeper focus – I wanted to know what aspect of each photo captured my attention. 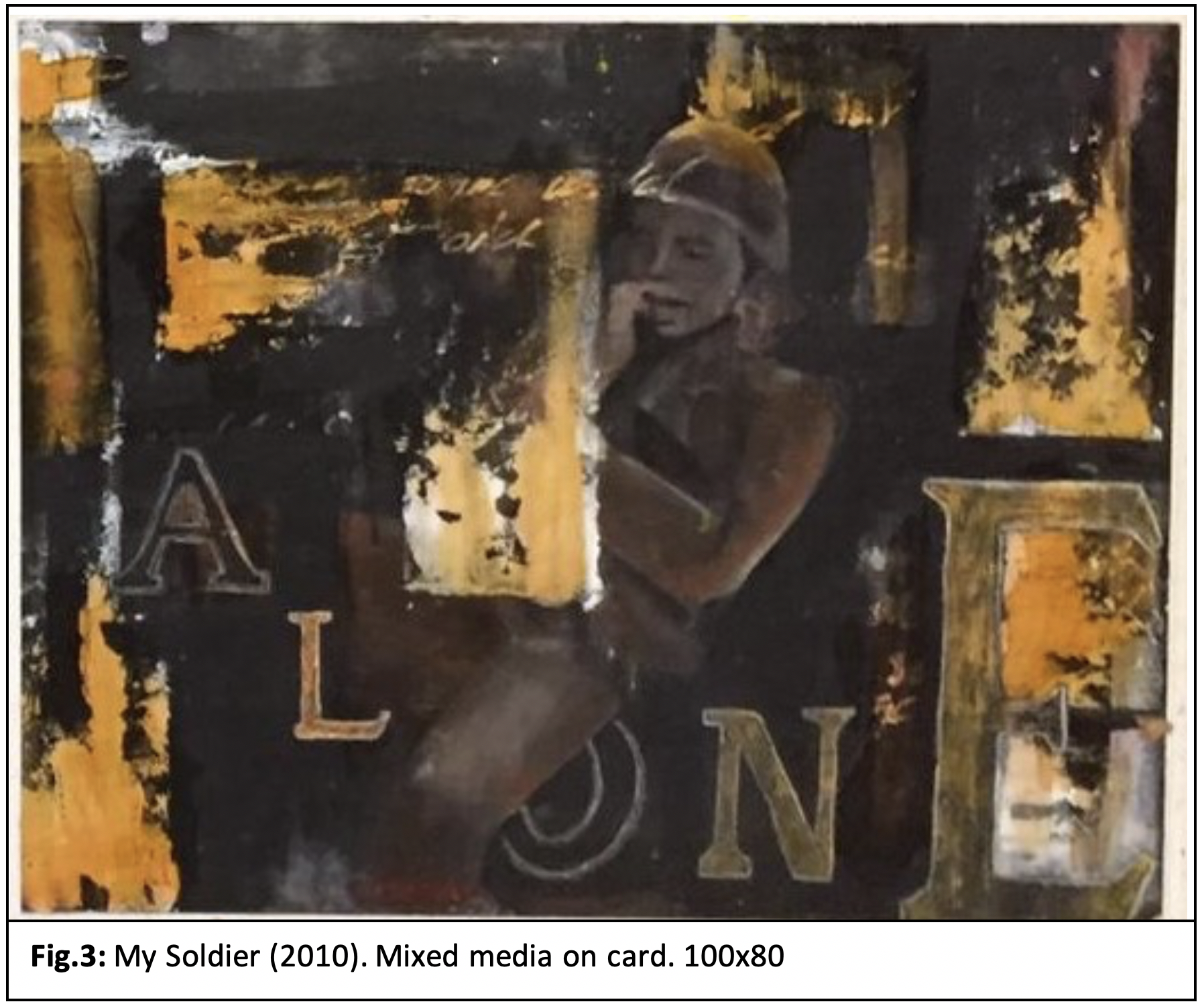 Once we have seen suffering we are faced with a moral decision in how we respond. I could choose to ignore what I saw and felt in the image of this young soldier. I could choose another image, another topic to explore – my resulting artwork would have been displayed in the same way, to the same audience, regardless of the content. I could have found more images of big guns, but I didn’t. I needed to share what I had seen and felt.

Frosh (2016) describes the primary response to suffering in the digital age as communicative action – sharing a video or photograph widely, to raise awareness and prevent further actions, or simply to acknowledge that the suffering occurred. Sitting in my classroom, I needed to share what I had felt when I saw my soldier – the destruction of innocence that does not choose a side, the shared suffering inflicted on humanity through war. In this case though, sharing was not the quick click of a digital button, but a belaboured process of interpretation and creation with paint.

Sometimes we can choose to filter or curate our media feed, hide from the suffering before it overwhelms us. As in social media, so too in art we can choose to cover what we don’t want to see and focus on brighter times. Indeed Frosh (2016) makes clear there is the potential, when communicating enormously tragic events, for individual stories to be lost and the narrative of suffering to become overwhelming; the viewer becoming helpless and unable to respond morally to all they are exposed to. Reflecting on my folio (fig.3) certainly could elicit this response, I have to now reflect, as the young soldier becomes one small feature within the whole composition, one piece of a larger picture. 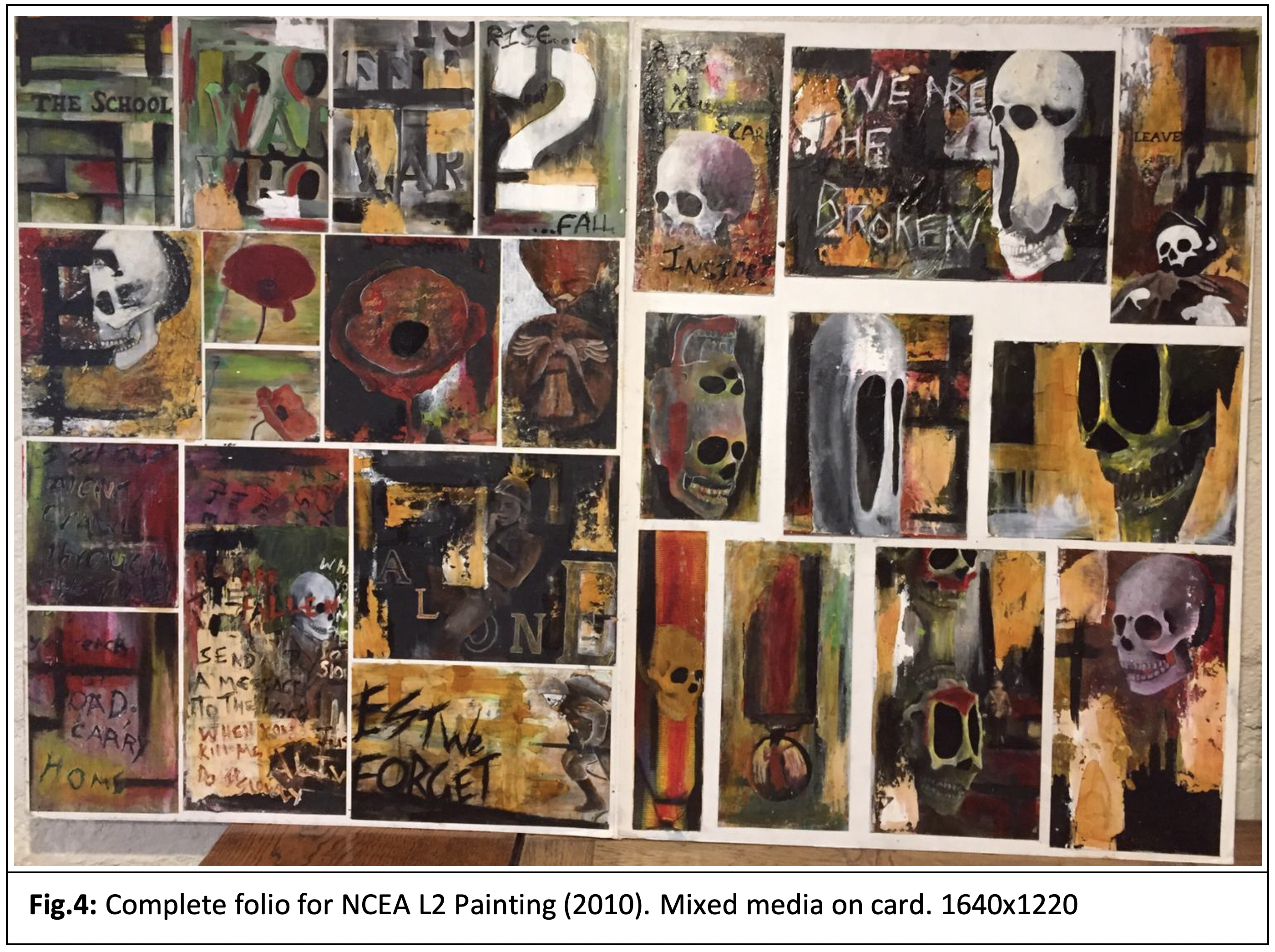 For a moment the viewer too feels the overwhelming weight of suffering that exists behind the barrier of our screens, and we become like my soldier, or perhaps the photographer – left with nothing but the ability to witness and remember.

I never tried to find out more about the photographs I used at the time, nor in the ten years since I made this board. I knew the wars they came from, perhaps who they fought for, but not the stories of the men. In hindsight I was hiding from the full truth, keeping the distance of ignorance to keep from being overwhelmed. The folio received an Excellence, and placed second in my school that year, yet I have been almost ashamed to share it knowing so little about the history of my source materials. The most recent time my soldier whispered, I listened, intending at last to let him rest.

To my surprise it turns out the soldier who inspired my art, who has stayed with me for so long, was a work of fiction – filmmaker Berhnhard Wicki’s own moral response to suffering. My soldier’s photo was in fact a still from his film “Die Brücke”. Released in 1959, this West German film follows a group of seven 16 year old school students enlisting late in 1945. The film shows their experiences as they are sent to defend a bridge in their home town with almost no training, and all but one of the boys die as they experience the horrible reality of war. The film ends noting that it was based on a true story (IMDB, 2020).

Several things suddenly made sense when I found this out. Firstly, the affinity I had felt was real because the soldier was my age. Secondly, everything had been designed to elicit an emotional response from the viewer – camera angle, posture, positioning. I wondered if it was a sense of difference that made my soldier’s photo stand out among the stack – subconscious awareness that it was somehow wrong, or staged. But I soon realised that did not matter.

The intent of Die Brücke was to share an emotional response to the horror of war. More than fifty years on it continues to do so with just one frame. In doing so it continues to offer me a choice of moral action – turn away from the suffering, or witness it, and share a moral response of my own. The eye of the artist may say “This is Not a Soldier”, but through the eye of the beholder we can still say “This is Suffering”.