Written by Amy Hema, for an assignment on ‘administrative evil’ in ANTH424.

The 1970s saw some of the darkest times for New Zealand, following the economic crash of the late 1960s. With the first waves of unemployment since the Great Depression, the country was looking for someone to blame. It was was in this context that ‘overstayers’ were deemed to be burden to New Zealand [1]. These overstayers were typically Pasifika peoples who had been actively recruited for New Zealand’s booming labour market, in the early 60’s. Now their deportation was deemed a priority.

To this end in 1974 the New Zealand police began raiding houses suspected of containing overstayers, in the early hours of the morning [2]. These came to be known as the Dawn Raids. Racially motivated, and traumatising for the Polynesian population that were often the focus, this is a moment in the country’s history that largely goes undiscussed, and yet had significant impact on a people group that were marginalised, villainised and targeted by the New Zealand government and police. 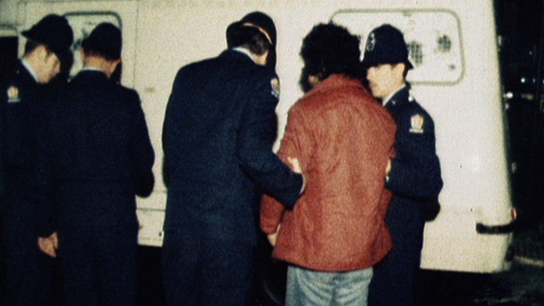 A screenshot from a 2015 ‘NZ on Screen’ documentary called ‘Dawn Raids’. The image shows a Pasifika man being taken into custody by police. The documentary represents very recent attempts to acknowledge this part of New Zealand’s history. Source: https://www.nzonscreen.com/title/dawn-raids-2005

Adams and Balfour have written extensively about the relationship between administration and evil; a relationship that is often overlooked, but powerful in enforcing ‘evil’ in the sense of  harm against a particular vulnerable group [3]. The Dawn Raids are a prime example of administrative and bureaucratic authority being used to enact this harm.

Adams and Balfour argue that our daily lives are built upon are taken for granted assumptions; that we take little time to examine the way we are living and the impact it may have. Subsequently, something as fundamental as language and storytelling can make us susceptible to participating in evil without realising it[3].

The dawn raids went largely unopposed by the general public due to the language and discourse used to describe those being targeted in the raids, being unthinkingly accepted. 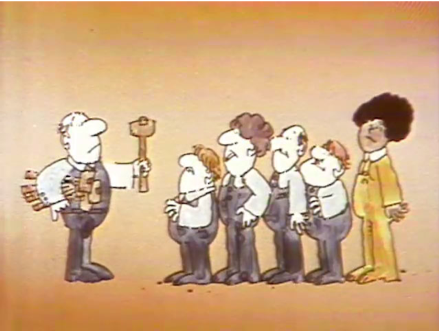 In a 1975 campaign run by the National Party, Polynesians were depicted as aggressive, unwelcome pests who were taking jobs away from deserving Kiwis [4]. The ad told the story of New Zealand as a peaceful nation, one that you would want to raise your children in… until the arrival of immigrants. It claimed that these immigrants became incensed by the lack of jobs, healthcare and education, and turned angry and violent.

In these ads, the blame was being placed squarely on Polynesians; the happy compliant residents depicted were white, whilst the angry individual was brown with a large afro. As such, these ads were used to create a divide between ‘us’ and ‘them’ – those who deserved to be in NZ and those who did not.

The ads created a strong and specific narrative that became a taken for granted ‘Truth’; that Polynesians were taking advantage of New Zealand’s resources and generosity, and that they needed to be removed. Referred to simply as ‘overstayers’, ‘illegals’, and ‘browns’ and presented to the public as over-the-top caricatures, a clear message was sent about who these people were, what they were doing to the country and how they should be dealt with[5]. These catch-all terms enable the individual to refer to a group without acknowledging they are individual humans, who came to New Zealand looking for a better life, instead they are just a collective problem.

In interviews taken at the time of the raids [5], New Zealanders were clearly holding tight to these narratives. As such, they became participants in evil – accepting and condoning through acceptance that a group of people be harmed by prejudicial policies and laws. Standing back and watching it happen.

Through social discourse one can readily observe the way in which language is used to dehumanise and separate the other to allow for the continuation of administrative evil – by actively reinforcing racial stereotypes, create to separate and privilege, New Zealand citizens became passive participants.

The Social Construction of Compliance

Interviews with former police officers evidence the same position; they may have been overzealous in their attempts to identify and charge overstayers, but they believed their cause was just, and they were following orders[5]. Adams and Balfour have discussed these attitudes in what they call ‘the social construction of compliance’  – in which the an individual is pushed to perform violence under the direction of authority – whether or not they agree with the process becomes irrelevant as they are no longer acting as an individual but as a cog in a machine.

Adams and Balfour argue that as a culture that has come to place so much value on individualism, the USA has come to expect that when presented with a difficult choice, an individual will stick to their morals and refuse to comply[3]. Did the normative ‘Pakeha’ 1970’s New Zealand share a similar moral system? We know from the overzealous policing that during the dawn raids, the police force became aggressive in their pursual of overstayers. They stopped  individuals on the street and asking for identification, in what was essentially ‘stop and frisk’, since the individuals stopped were done so based on the colour of their skin. They raided homes at the crack of dawn, deliberately when individuals and families were vulnerable.

The actions taken by the police and the legal system were extreme, and individuals were being persecuted for minor crimes (such as petty theft) to the fullest extent of the law, at an unprecedented rate – though this was all technically legal, functioning within the system rather than as an exception to it.

Policy makers and police officers put their own opinions and feelings aside to carry out the policies set in place – even if it meant brining harm by enforcing racist ideologies. Whilst there was some push back on the stop and frisk policies, they were ultimately widely enacted by law enforcement[5]. What one can observe from the police tactics at the time is that group morality had the capacity to overrule individualism – a fact not readily embraced by many who believe in individualism. 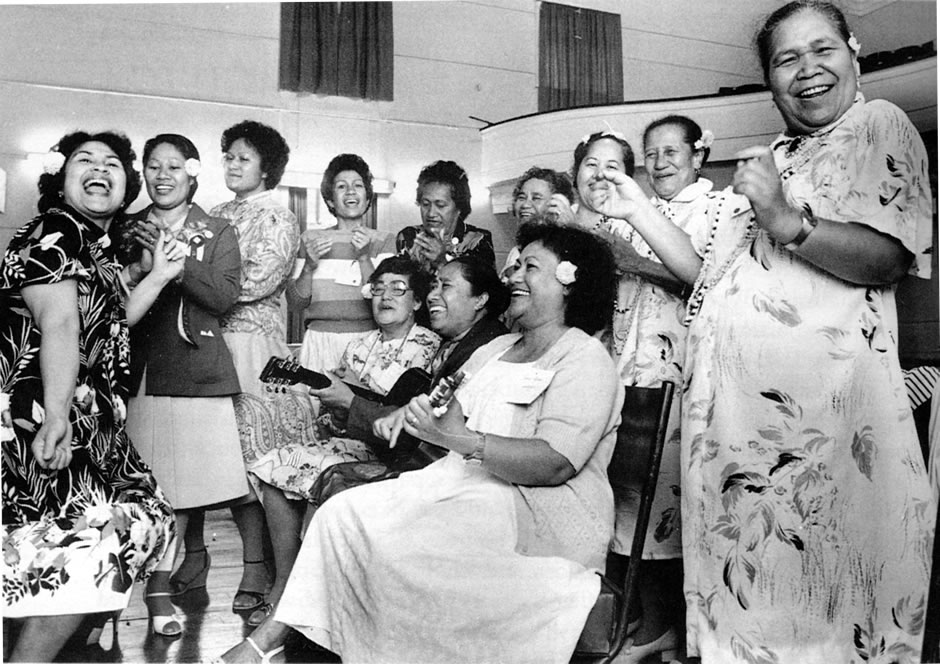 Women performing at a Pacifica conference in 1975. Source: https://nzhistory.govt.nz/women-together/pacifica

What is made evident by examining the history of the Dawn Raids in New Zealand, is that administrative evil relies on both passive and active participation. By sharing narratives of harmful individuals who are taking away jobs from more deserving individuals, and upholding policies that allowed law enforcement to act on racism and stereotypes, a culture was created that allowed evil to continue in a way that was accepted by the mainstream populace.

Adams and Balfour stress that administrative evil flourishes under conditions in which people believe in the cause or adopt the ideologies as taken for granted facts – the success of administrative evil then rests in the failure to identify the evil nature of the act until it’s too late.