The Centre for Research on Colonial Culture is very pleased to be hosting Dr. Patricia O’Brien, an ARC Future Fellow based at the Australian National University. In 2012 she was the JD Stout Fellow in New Zealand Studies at Victoria University of Wellington, and in 2011 she was the Jay I. Kislak Fellow in American Studies at the John W. Kluge Centre at the Library of Congress, Washington, DC. From 2001-2013 she was visiting Associate Professor in the Centre for Australian, New Zealand and Pacific Studies at Georgetown University, Washington, DC. She is the author of The Pacific Muse: Exotic Femininity and the Colonial Pacific (Seattle, 2006) and is currently working on a biography of Samoan nationalist leader Ta’isi O. F. Nelson.

Dr. O’Brien is visiting the Centre until March 24th and while in Dunedin will be giving two research talks. Her first talk is on Wednesday March 18th in the Department of History and Art History (Burns 5, from 3.30) on ‘Ta’isi O. F. Nelson and the Mau: Australian Dimensions to New Zealand and Samoan History’. On March 23rd she will present a paper to Te Tumu: School of Maori, Pacific and Indigenous Studies called ‘The Trials of Mr Nelson: Ta’isi O. F. Nelson and Indigenous Resistance in Interwar Samoa’. This talk will take in Cen3 (Central Library) from 2.30.

We hope to see you at both talks!

We are delighted to announce that Professor Ann Curthoys is giving a free public lecture entitled “Scots and Indigenous Peoples in the Australian Colonies” on Monday 24 November in Castle Lecture Theatre 1 at 3.30. Professor Curthoy’s lecture also doubles as the opening keynote address for the Migrant Cross-Cultural Encounters Conference (24-26 November) being co-convened by the Centre for Research on Colonial Culture, the Centre for Irish and Scottish Studies, the Asian Migrations research theme, and the Cross-Cultural Comparative Studies research theme.

Professor Curthoys is one of Australia’s most respected historians. She is an Honorary Professor at the University of Sydney, and a member of the Australian Academy of the Humanities and the Academy of Social Sciences in Australia. In 2013, she was awarded the History Council of New South Wales Annual History Citation that recognises and honours an individual who has made a significant and lifelong contribution to the profession and practice of history. She was formerly an Australian Research Council Professorial Fellow at the University of Sydney (2008-13) and Manning Clark Professor of History at the Australian National University (1996-2008). She has written widely on questions of Aboriginal history, genocide theory, and race relations in colonial and modern Australia. Her current research focuses on Indigenous-settler relations in the Australian colonies. As part of her ongoing research on the British Empire, settler self-government, and Indigenous peoples, she has a particular interest in Scottish-Indigenous relations in the mid nineteenth century, and it is this aspect of her research that she will detail in her public lecture.

She has provided the following abstract:

We can tell the history of Scottish migration to colonial Australia in several very different ways. We might emphasise a generally positive history of struggle and achievement as Scots migrated from one end of the world to another. Or we might narrate a tragic history of Aboriginal dispossession, displacement and replacement in the face of European settlement, a story of violence and great loss of life, and sometimes the destruction of whole societies as settlers fought to secure their hold on the land. Though these two stories are usually told separately, they are, of course, connected – Scots and Aboriginal people encountered one another constantly, and Scottish upward mobility was built on Aboriginal dispossession. Though the task is challenging and difficult, it is worth considering both Scottish diaspora and Indigenous histories together, for when we do, we can better understand some of the complexities of empire and colonisation in the nineteenth century. A focus on Scots can help us deconstruct the categories ‘British’ and ‘settler’, and foreground in new ways the connections between immigrants’ origins and background (in political, cultural, economic, and social terms) and their cross-cultural interactions in the colonies.

In this paper, I discuss the cross-cultural encounters between Scots and Aboriginal people in Australia from the mid 1830s to the mid 1870s. This was the period when a set of struggling British colonies – mostly dependent on convict labour, covering relatively small regions of settlement, and under direct British rule – were transforming into free self-governing democratic colonies dominating vast regions of the continent. While some areas were still experiencing intense frontier conflict and violence, in others the violence had largely ended and a post-frontier society, involving new settler-Indigenous relationships, was emerging. The Scots I consider included both pastoralists and their critics, such as journalists, politicians, amateur ethnographers, and men of the church, and the Indigenous peoples they met are those whose country lay in the two Australian colonies named after Queen Victoria – Victoria and Queensland.

On 30 June and 1 July the Indigenous Textual Cultures Symposium will be held in the Seminar Room at the Hocken Collections.  The Centre is excited to host this event, with leading academics from South Africa, North America, Australia, New Zealand and the Pacific presenting research looking at how indigenous peoples interacted with literacy and texts during the colonial period.

Check out the programme and the presenters’ Abstracts.

All interested staff, students and members of the public are most welcome to attend.  There is no fee for attendance but please RSVP to lachy.paterson@otago.ac.nz so that we have some idea about numbers for catering. 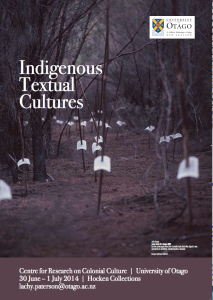 Posted on November 5, 2013 by Angela Wanhalla

A special issue of the Journal of New Zealand Studies on Colonial Performance has just been released. It features essays by a number of the Centre’s members, notably Tom Brooking and John Stenhouse, and the volume was edited by Barbara Brookes. Congratulations to all involved in creating this special issue!

For those interested in the relationship between family, colonialism and settler culture we encourage you to read, and follow, the Families and Colonialism Research Network Blog created and managed by Emily Manktelow, Laura Ishiguro and Esme Cleal. Its a great way to keep informed of new books and journal articles in the field, as well as forthcoming research events.

Posted on November 9, 2012 by Angela Wanhalla

Tony’s Ballantyne’s new book, Webs of Empire, is capturing the attention of New Zealand media. Listen to Tony talk about his new book on Waatea News to find out how Gore and Chicago are connected, the important links between Māori and Asia, and the processes and practices of colonial knowledge production.