Centre for Research on Colonial Culture
Rethinking Colonialism & its Legacies

Just a reminder to register for the Held in Trust: Curiosity in Things Conference to be held at Otago Museum on 24-25 January 2019. This is a FREE event, so please do register your interest in attending by contacting us at crocc@otago.ac.nz 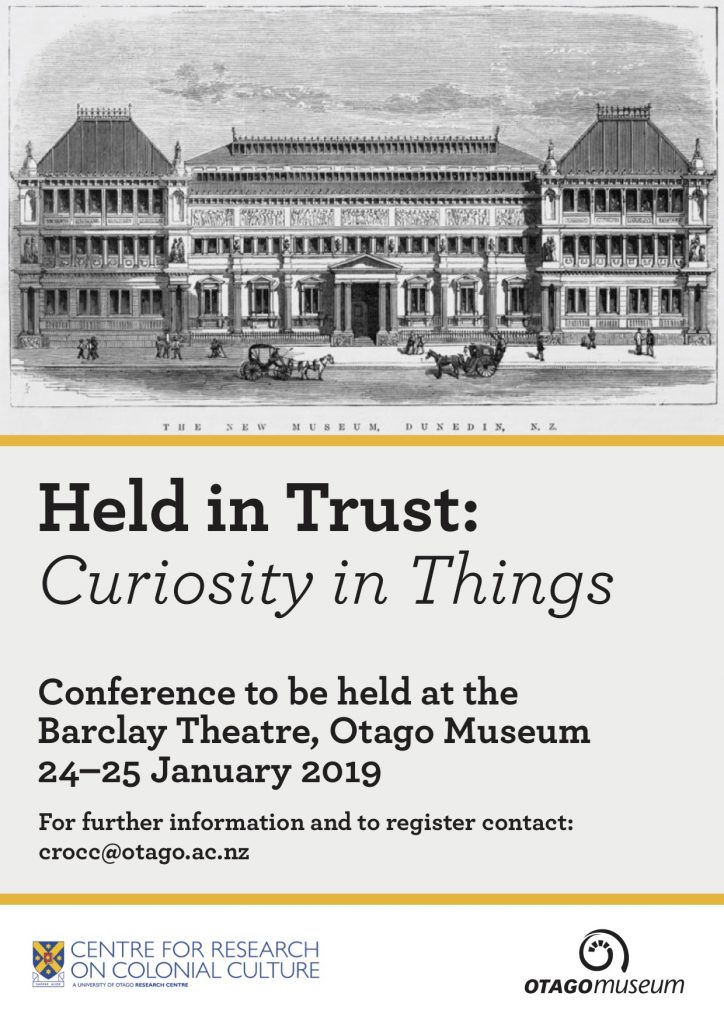 Posted on December 1, 2018 by Angela Wanhalla

Over the past few months the Centre has been busy with symposia and planning our 2019 schedule. What follows are some recent highlights in Centre activities. 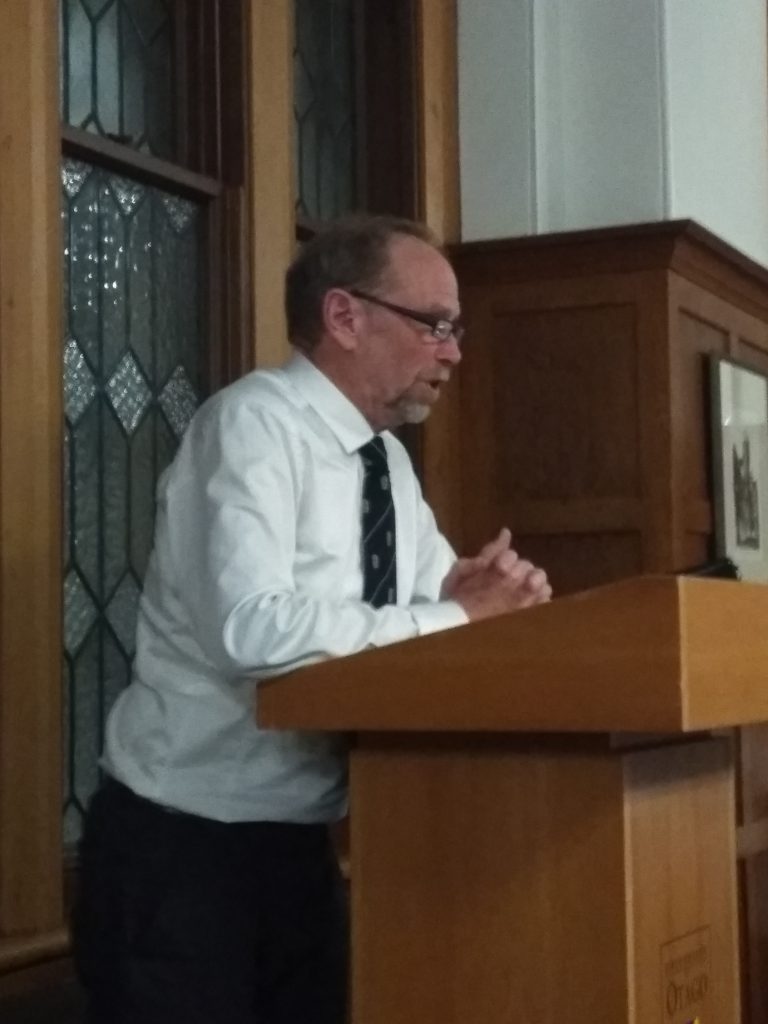 Tom Brooking reflecting on his 41 years in the University of Otago’s Department of History.

Throughout the year we have sponsored a number of events, notably the Global Dunedin Speaker Series at Toitū organised by Angela Wanhalla, which was brought to a close on 14 October with a lecture from Dr. Ben Schrader who spoke to a large and lively audience about the links between place, space, urban culture and colonial history. The Centre thanks all the presenters who contributed to the series: Tony Ballantyne, Charlotte Macdonald, Michelle Schaaf, Kate Bagnall, Rosi Crane, Lea Doughty, and Jill Haley.

The Centre closed 2018 with two symposia. On 1-2 November, Lachy Paterson, Megan Pōtiki and Paerau Warbrick co-organised and hosted a symposium on Māori texts at the Hocken Collections. He Tuhinga nō Neherā: Texts, Contexts and Resonances featured scholars who spoke about and/or performed a range of texts. Michael Reilly discussed orality and voice in Kāi Tahu traditions collected by the German missionary Johannes Wohlers; Lachy Paterson examined the writings of Wiremu Taratoa; Tahu Potiki used the writings of Matiaha Tiramorehu with relevance to occupancy of Moeraki; Paul Diamond addressed texts that no longer exist in their original form or are held overseas; and Barbara Brookes spoke about the maiden speeches of Iriaka Ratana and Whetu Tirakatene-Sullivan. Many drew upon documents in family collections, such as Megan Pōtiki who talked about the dreams her tūpuna Raniera Ellison recorded in his journal; Rangi Matamua spoke about Māori knowledge of the stars written in a private ledger; Paerau Warbrick used family letters, as did Poia Rewi; Anaru Eketone discussed a Ngāti Maniapoto petition led by his grandfather; Tangiwai Rewi examined the creation of a waiata; Tonga Karena looked at Indigenous discourses of peace traditions at Parihaka through haka; and Matiu Payne looked at an affidavit from a Ngāti Mutunga kuia as part of a discussion about whāngai rights. 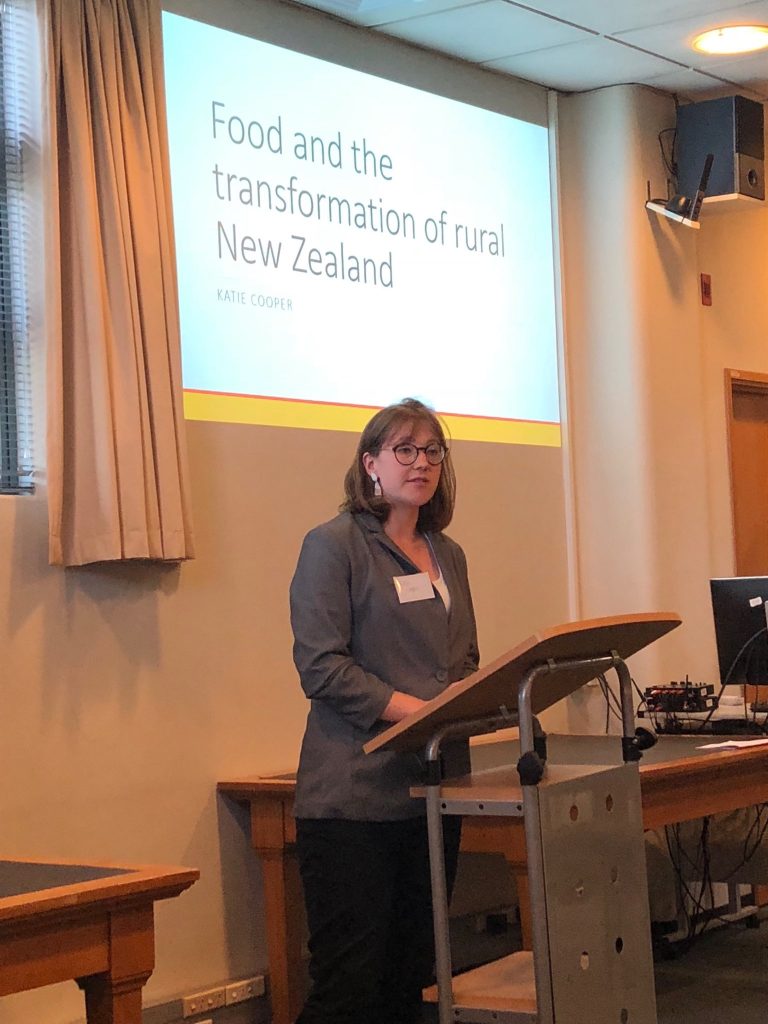 In the final months of 2018 Centre members have gained a number of awards and prizes. Congratulations to Jane McCabe who was presented with the Archives and Records Association of New Zealand Ian Wards Prize for her book Race, Tea and Colonial Resettlement (Bloomsbury, 2017) at a function in Dunedin on 22 November. Jane shares the prize with Shaunnagh Dorsett. 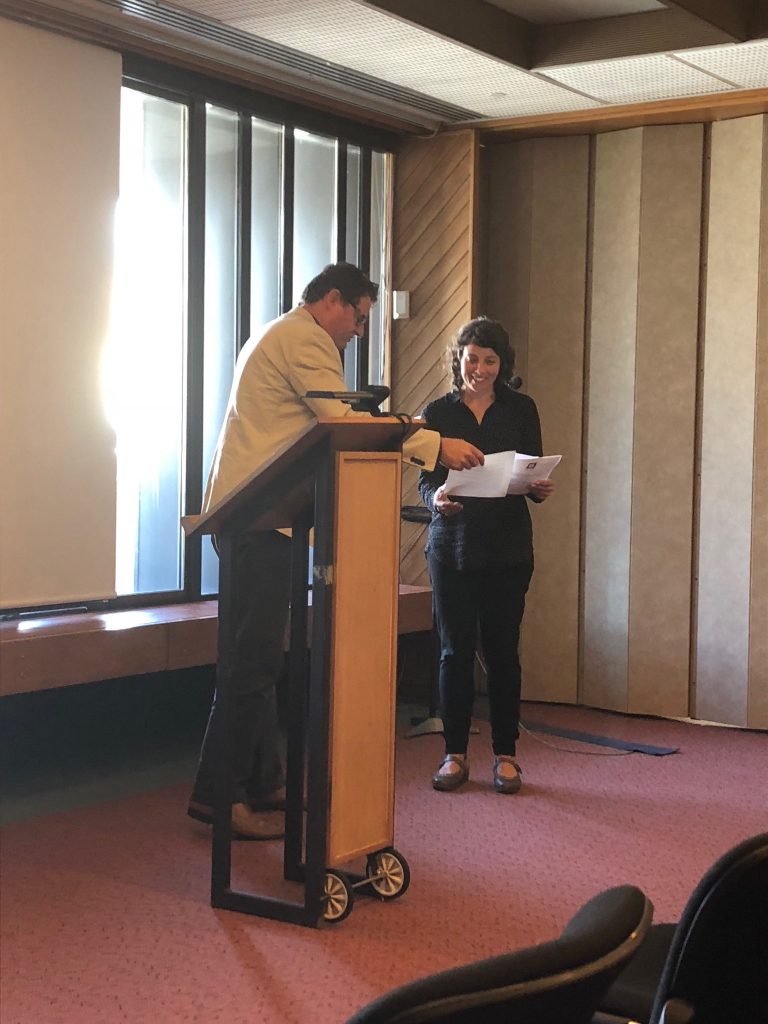 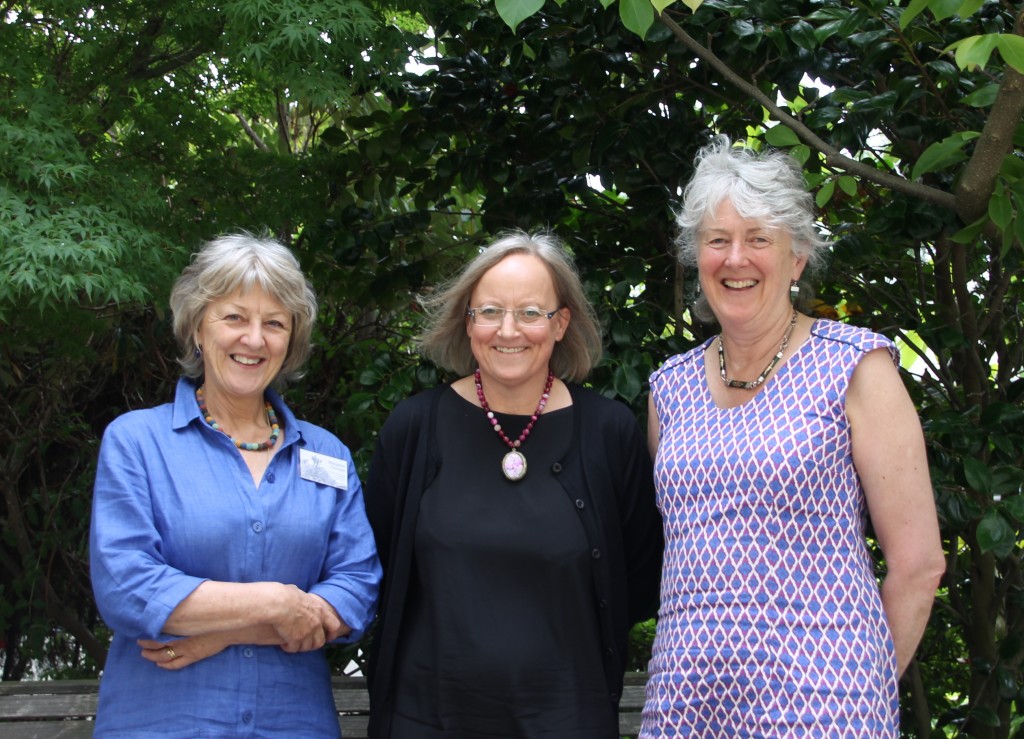 During 2018 a number of publications seeded at Centre events appeared: New Zealand and the Sea, edited by Frances Steel (Bridget Williams Books); Pacific Futures, co-edited by Barbara Brookes (University of Hawaii Press); and Indigenous Mobilities, edited by Rachel Standfield (ANU Press). In addition to these edited books, several special journal issues have appeared from workshops and symposia funded by the Centre. These include a special issue of History of Photography (edited by Jane Lydon and Angela Wanhalla) on Indigenous photographies; a special issue of the Journal of Pacific History on the commodity history of coconuts (edited by Judy Bennett) and an issue of Rethinking History (co-edited by James Dunk and Barbara Brookes) on archives and knowledge production.

We closed the year with the launch of Annabel Cooper’s book, Filming the Colonial Past: New Zealand Wars on Screen. 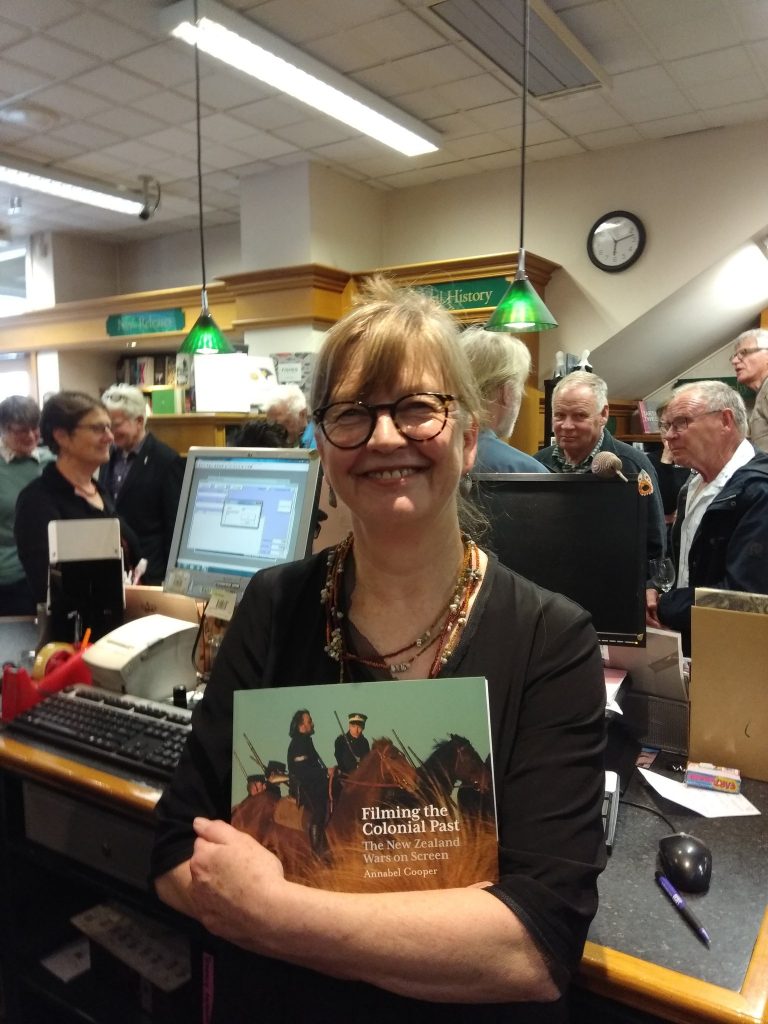 Annabel Cooper and her new book, launched at UBS on 30 November (photograph by @LachyPaterson)

We have a number of events planned for 2019. The first is Held in Trust: Curiosity in Things, a single-stream two-day conference at Otago Museum in late January 2019 (see poster) organised by Rosi Crane. Keynote speakers are Conal McCarthy, Tony Ballantyne and Simon Ville. Have a look at the Held In Trust Programme.

Our big event for 2019 is a conference to mark the University of Otago’s 150th anniversary in collaboration with the Australasian Victorian Studies Association (AVSA). The theme is 1869 and the CFP will be circulated in early 2019. In the meantime register your interest in attending via 1869@otago.ac.nz 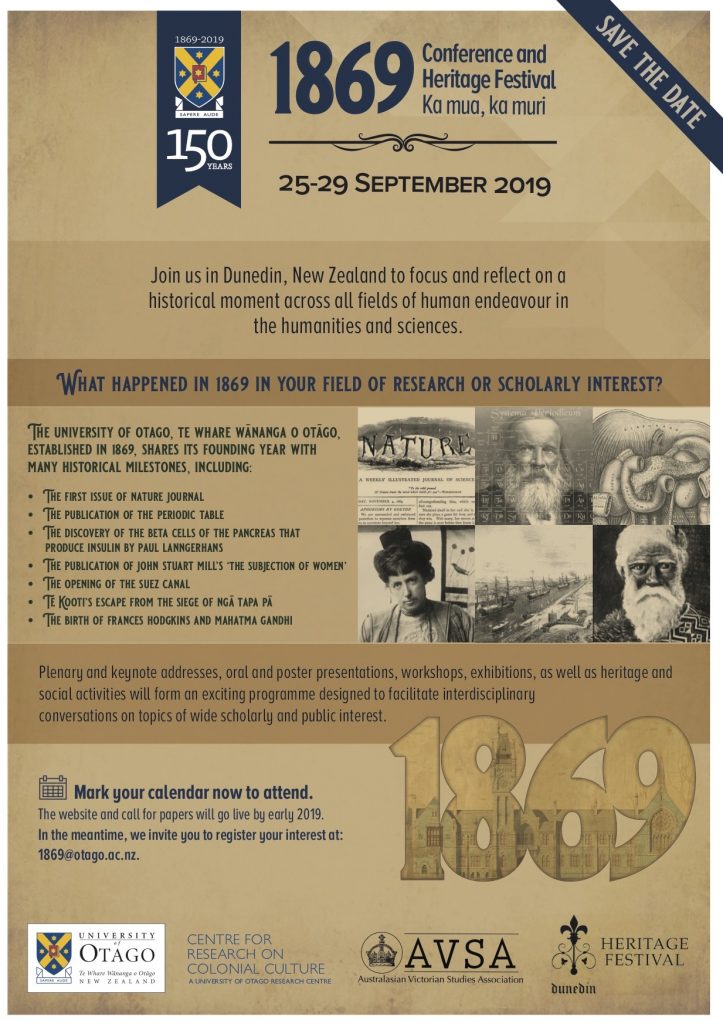 Centre member, Associate Professor Lachy Paterson is giving the keynote at the annual University of Otago Centre for the Book conference at 5.30-6.30pm, Thursday 1st November in the Moot Court, 10th floor of the Faculty of Law.  Please feel free to come along.

The conference theme this year is Translation and Acculturation. Lachy will present “Whakamāoritanga Whakapākehātanga: Translations between Māori and English” in which he will be discussing issues pertaining to translation, both now and from New Zealand’s colonial past. 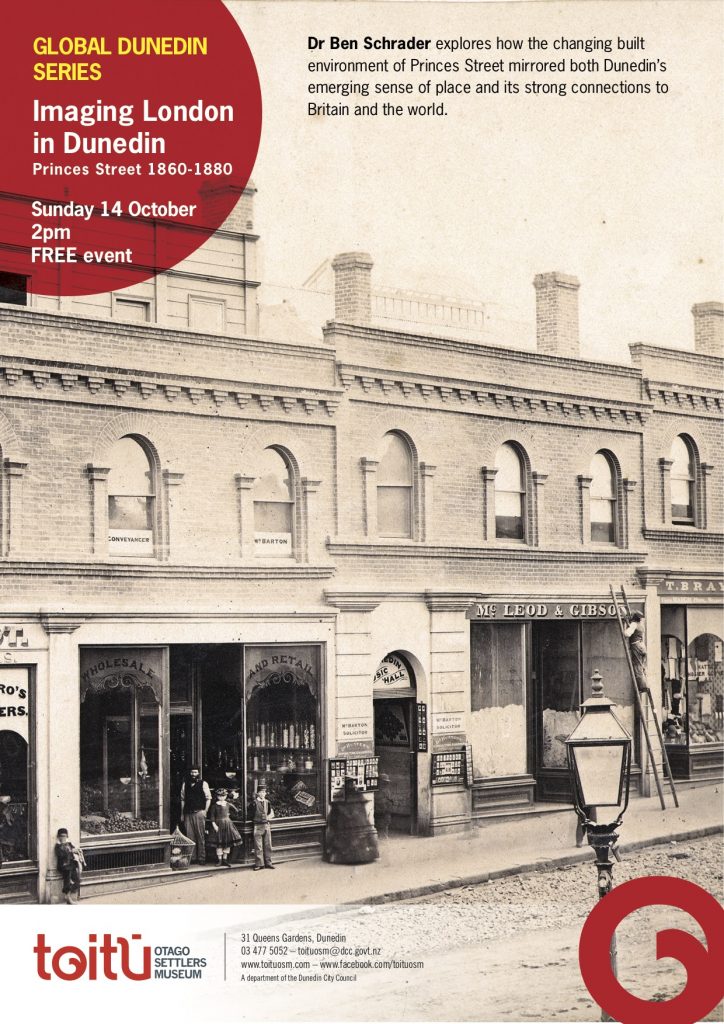 HELD IN TRUST: CURIOSITY IN THINGS

A conference co-sponsored by Otago Museum and the Centre for Research on Colonial Culture, University of Otago

The history of museums has largely been framed under the rubric of colonial domination or building cathedrals of science. But what are the bigger stories that motivated the creation of the collections?

Objects have the capacity to tell stories of lives and communities that are interconnected over space and time. Objects are the tangible material world of scientific endeavour and during the nineteenth century trade in them boomed, yet accounts of the political context surrounding their discovery and translocation are overlooked.

Looking beyond object biographies, tales of eccentric collectors, acquisition and institutional histories, this conference foregrounds the global context of commercial trade and exchange networks that contributed to the patterns of knowledge discovery and creation. What then are the bigger stories of culture, economics and politics that formed our colonial museums?

We invite contributions that address the broad theme of knowledge production in the colonial museum. 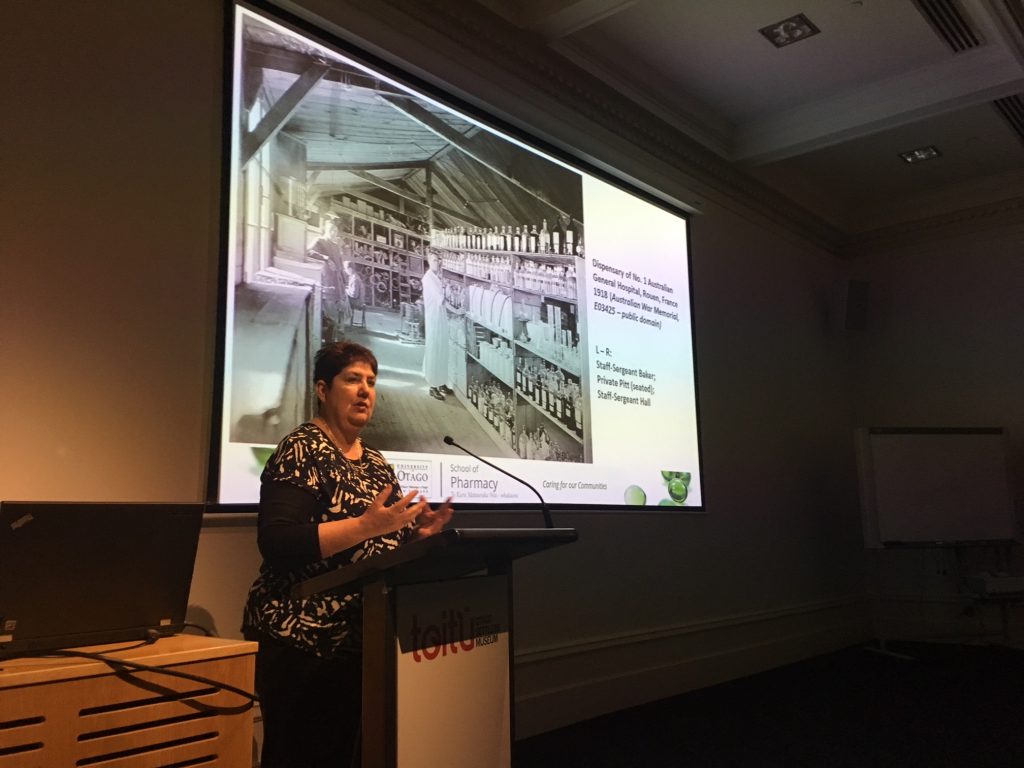 Professor Sudesh Mishra, a scholar, poet, playwright and novelist based at the University of the South Pacific, will present in the Department of Sociology, Gender and Social Work research seminar series on Wednesday 15 August. Details of time and location are on the poster below. All welcome. 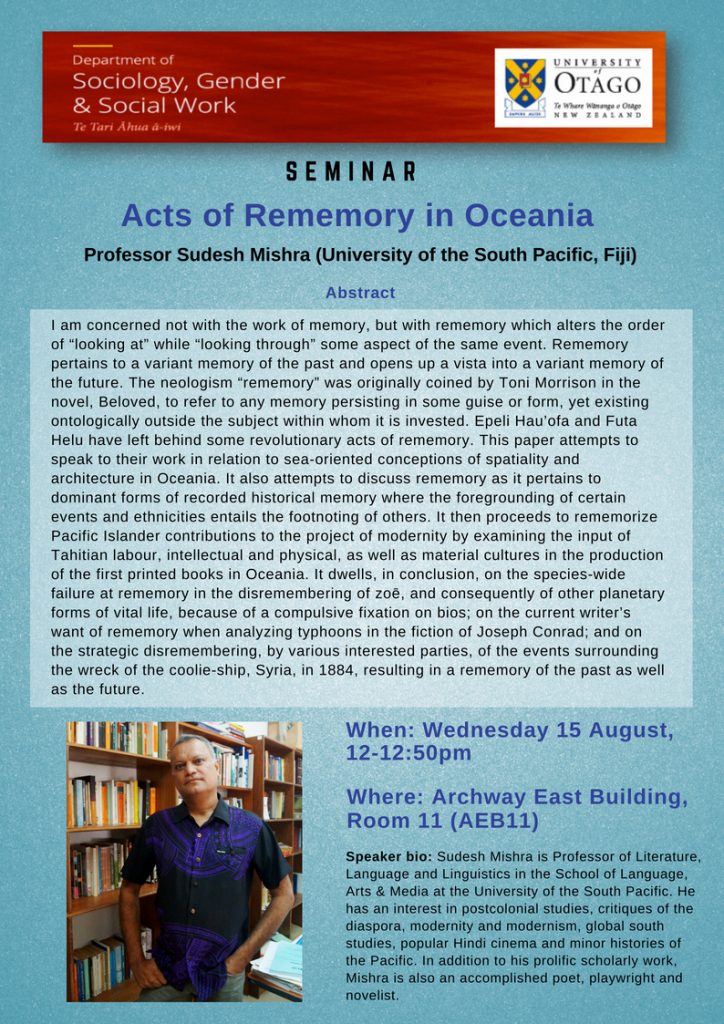