One of the more common, yet insidious hazards that utilitarian cyclists regularly face in urban areas is avoiding, running into or being struck by a car door (usually on the driver’s side). In some jurisdictions, “dooring” has been called the most common type of vehicle/cycle collision (Munro), although these events are undoubtedly under-reported and the risk will vary from place to place. The NZ Road Code, like many other countries, warns drivers specifically about causing a hazard to other road users from door openings.

Purpose: The purpose of this demonstration project was to determine the feasibility of developing and displaying a publicly accessible interactive web-based map of police reported dooring-related bicycle injuries among New Zealand (NZ) cyclists. This work was performed by the University of Otago’s Injury Prevention Research Unit (IPRU) utilizing data extracted from the NZ Traffic Crash Reports (TCR) recorded by NZ Police and coded by the NZ Ministry of Transport.

Methods: Vehicle movement data coding was used to select which crashes involving a cyclist injury occurring between 2007 and 2011 were the result of collision with an opening door. TCR records include the spatial coordinates of the crash site and relevant movements of each involved vehicle. The coordinates of each crash site were converted into a format suitable for viewing and sharing in Google Maps™.

Results: Between 2007 and 2011, 245 cycle dooring injuries were reported in New Zealand (mean = 49/year). These represented 6% of all cyclist injuries involving motor vehicles (compared to 19.4% in Victoria, AU). Doorings comprised a much higher proportion of adult (age ≥19) cyclist injuries, 7%, versus 2% for ages <19. Two-thirds of the cases were male and most victims were adults (see table, below). The mean age for females was 31.4 years and for males 39.1. About 20% of these cases were seriously injured; two deaths were reported (counted within 30 days of crash, by definition).

Approximate dooring injury crash locations and some clusters along certain roadways can be seen in many of the larger cities (such as Tamaki Drive in Auckland, Victoria St in Hamilton, and Riccarton Rd in Christchurch).

Utilizing the capabilities of Google Maps Street View™ one is also able to ‘drill down’ (once in Google Maps™ click on the spot marker, then choose more/street view from the menu) and note street level photographic evidence of parking facilities, bike lane presence or absence, and other road characteristics near to each crash site. It is noted that the street-level picture itself may not always represent the way the road looked at the time and date of each incident due to the relative and infrequent timing of the Google Street View photography. The Street View also does not always properly indicate which side of the street the crash took place.

Discussion: We identified and mapped 245 cycle car door injury incidents over this 5 year period. This is undoubtedly an undercount as avoidance maneuvers leading to injury may not have been counted and police reports are known to miss more than half of all crashes involving cyclists (Meulners, Langley). It is difficult to say from these data whether the rate of door crashes per number of cyclists decreased over this period or the numbers of cyclists decreased (or some combination, thereof). 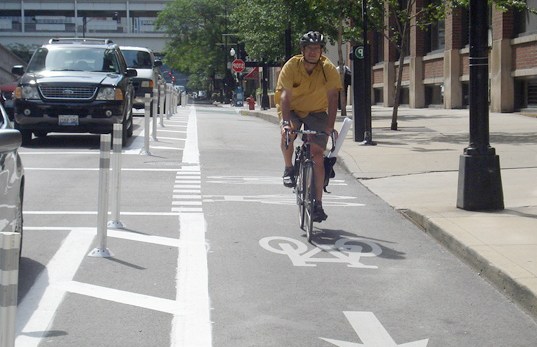 are many design possibilities (see NACTO Urban Bikeway Design Guide) for protected lanes, with and without parking. The protection can be parked cars, light or heavy duty bollards, planter boxes, or various types of raised infrastructure. If properly implemented (where roadway widths, traffic conditions, cross traffic and parking policies are amenable) these designs drastically reduce door hazards while appealing

to a greater number of more traffic adverse potential cyclists.

Recent research (Teschke et al in Toronto and Vancouver (reviewed here) and Lusk et al in Montreal) suggest that properly designed and implemented separated lanes can be at least as safe as regular bike lanes, while being much more popular to both riders and potential riders in preference surveys (Bohle, 2000, Emond et al., 2009, Jensen, 2007, Rose and Marfurt, 2007, Shafizadeh and Niemeier, 1997 and Winters and Teschke, 2010). Removal of parking is indicated where there are driveways and well before the protected bike lane approaches intersections to enhance sight lines.

Conclusions: Using Google Maps™ to map and display locations of dooring incidents can be a useful tool for looking at specific crash patterns with reasonable spatial precision and added capabilities. Streets with higher dooring risks can be readily identified in several specific urban settings with New Zealand’s small population and five years of data. To our knowledge, this is the first national interactive dooring map, while some cities are using similar tools.

Displaying incidents in this format can help with injury prevention efforts by highlighting the issue and potentially influencing planners and road safety officials in ameliorating problem areas through infrastructure changes while showing cyclists and safety advocates where the local dooring hazard areas are. Communities should aim for a connected cycle network with a variety of safe and inviting choices free of dooring threats for all types of cyclists for major destinations. 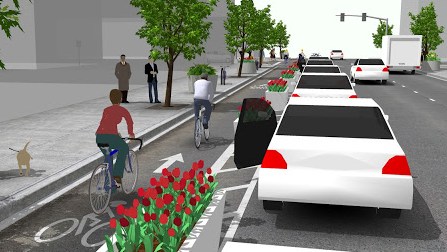 (Map programming compiled by Brandon de Graaf, concept and writeup by Hank Weiss. University of Otago, School of Medicine, Department of Preventive and Social Medicine, Injury Prevention Research Unit). We wish to thank the several reviewers who offered useful comments on this report.