5 things you might not know about the University of Otago…. 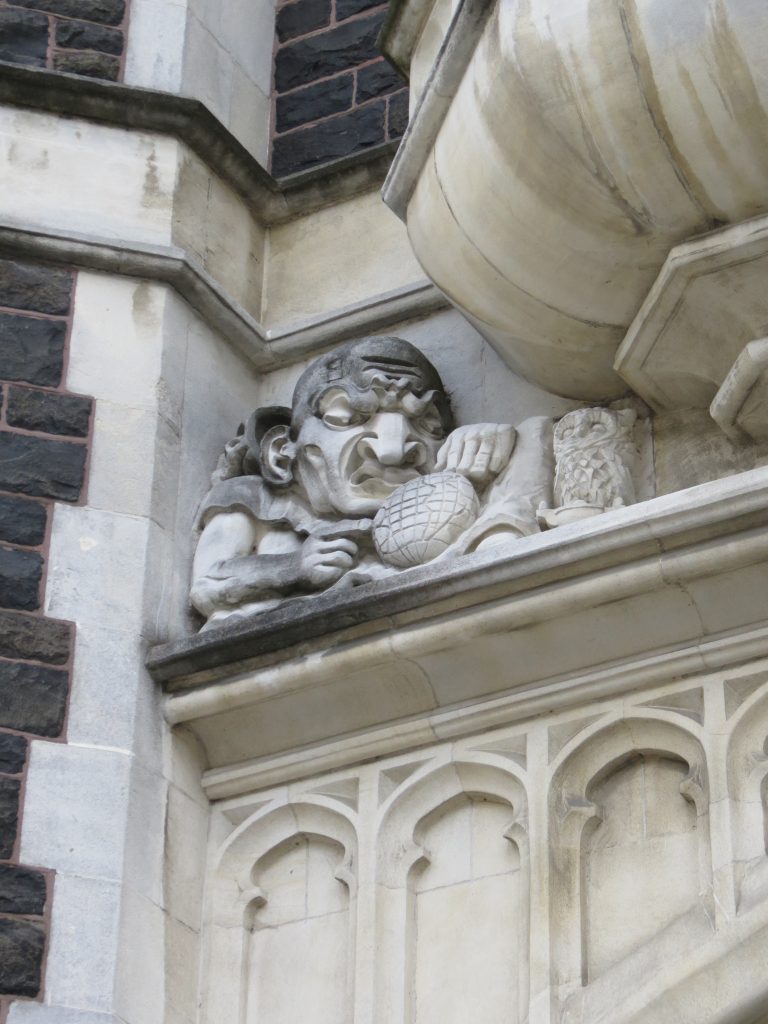 Perched high above the Archway (which was once the formal entrance to the University) are a series of grotesques, each representing the various branches of learning available at the university at the time.   They have been named gargoyles but the distinction lies between the fact that a gargoyle functions as a water spout to divert rain from the buildings, whereas a grotesque is purely decorative and involves either fanciful animal and human forms often distorted to be ugly and absurd.

Rumour has it that the grotesques were modelled on academic staff of the time……but that has never been confirmed.  The man responsible for these unique little design elements was Edmund Anscombe (1874-1948), the university’s architect from around 1909 to 1929.  While Fletcher Brothers won the tender to construct the Archway with a price of £10,292, the stonemason who carved the grotesques is unknown. 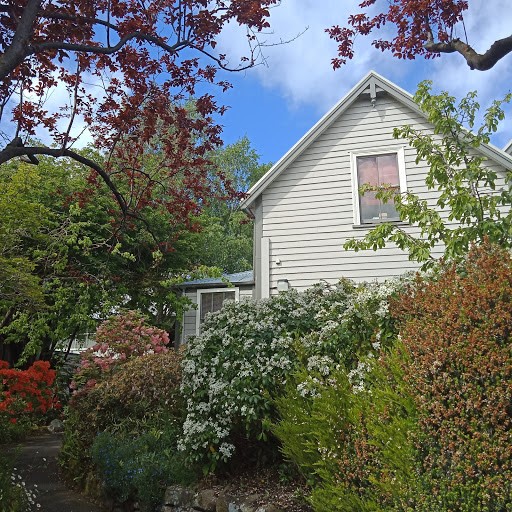 When you look at our gorgeous campus it is easy to assume that the oldest buildings are the old stone buildings in the centre of campus, but as the university expanded over time it began to acquire neighbouring properties which ranged from tiny cottages to larger homes.

Some were demolished, but some still survive, including what is widely deemed to hold the title of ‘oldest building on campus.’  Mellor House, one of the old Union Street houses which is now home to the Department of Psychology was originally built in 1862 for Thomas Calcutt, a printer who migrated from England to Otago in 1858. Cry me a river……of tears

These beautiful black gates were originally the main entrance to the campus, as the entire campus was once contained within the ‘Quad’ which you can see immediately beyond the archway.

This stone corridor houses display boxes on the left which now contain information about events around the university, but their original purpose was for the public display of exam results.  Hundreds would gather to view their results and many a tear was shed when the marks were not positive, hence the archway being coined ‘The Corridor of Tears’ or the ‘Tunnel of Tears.’

The archway links the Allen Hall building (completed 1914, it was originally the Students’ Union) to the former School of Mines building (completed 1909, which is currently home to the International Office and where I am writing this blog). The entire group of buildings was designed by Edmund Anscombe the architect for the majority of the University buildings from 1909 to 1927. 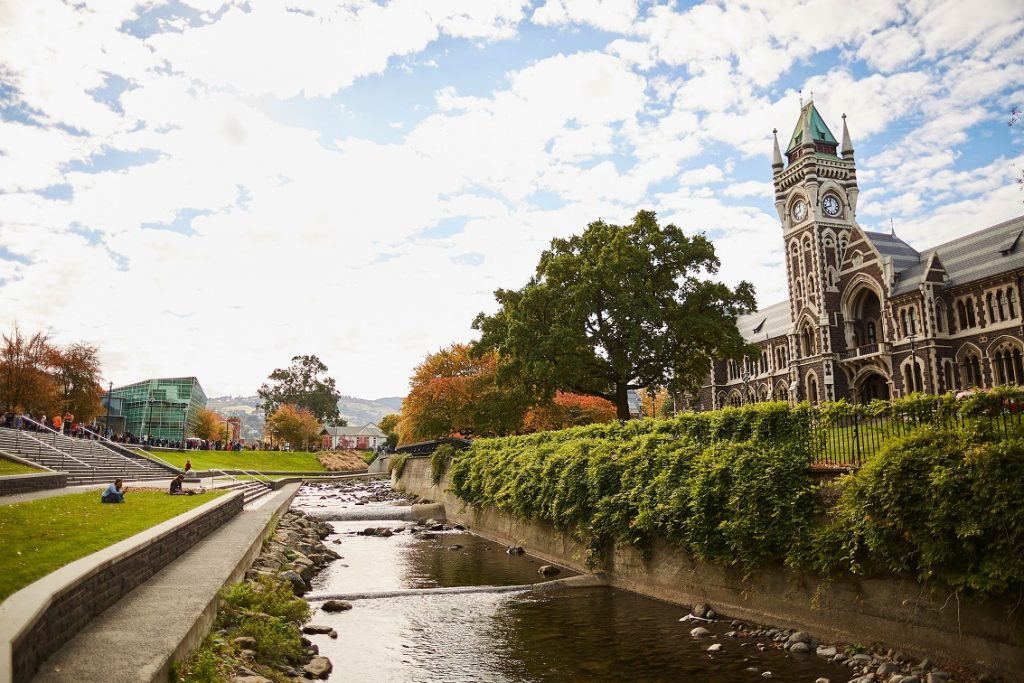 The original site of the Dunedin Botanic Gardens

The Water of Leith which runs through the university campus is not always this tranquil, and this was certainly the case when in February 1868 floods washed away bridges, and about an acre of gardens – at this point in history this site was home to the Dunedin Botanic Garden.  This saw the Botanic Garden moved further north to their current site, and the university was able to purchase the land and develop it in the 1870’s.  Some of the trees in front of the clocktower are indeed older than the buildings themselves as they are a reminder of the original inhabitants of this site. 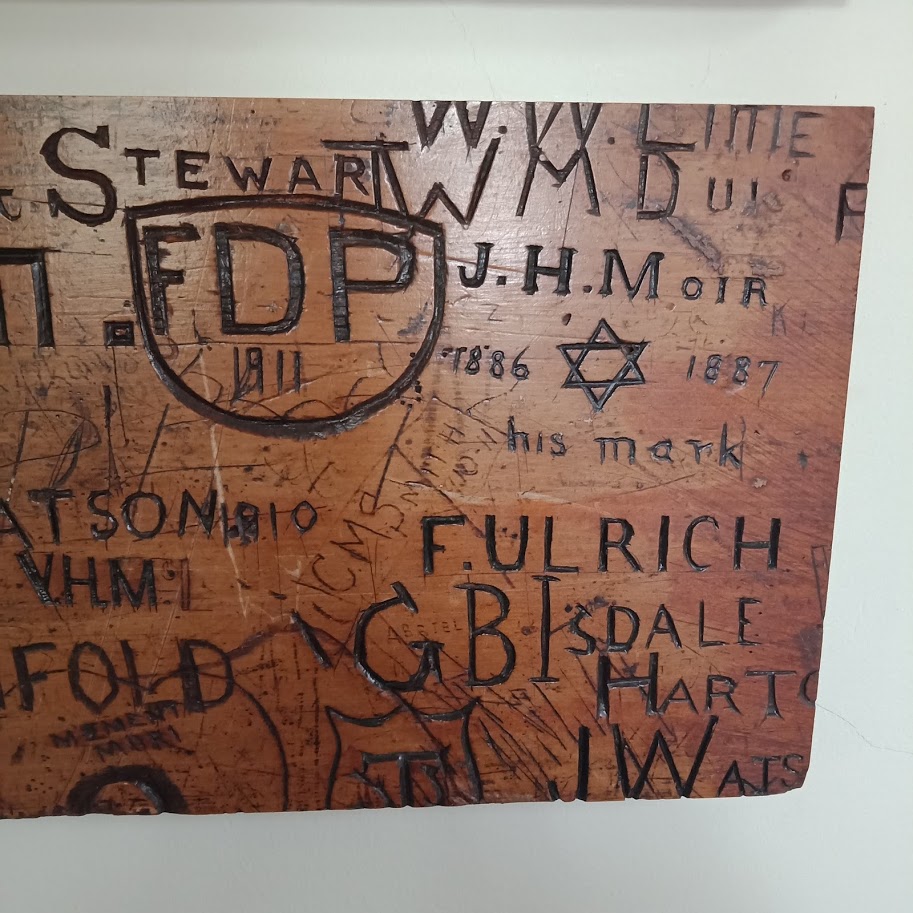 Students have always pushed the boundaries

The image above was taken from the desktops of the oldest lecture theatres on campus – in both Geology and the clocktower.  As you can see from the dates, some of this is very old indeed, with J.H. (John Harpur) Moir making his mark in 1886-1887.  Mr Harpur graduated with a B.A in 1890 and became headmaster of Dunedin’s Normal School.

The full installation, complete with plaque now features on the south wall of the council chambers in the clocktower building, and it really is a remarkable and historical sight to see, some of the graffiti is embedded so deeply into the wood, it must have taken hours!