Posted on November 9, 2014 by Lachlan Paterson

It’s been a busy few days at the Hocken Collections with the events around the Marsden Online Archive launch and opening of the associated “Whakapono, Faith and Foundations” exhibition, timed to coincide with the bicentennial of the arrival of missionaries in New Zealand.

Considerable publicity had led to these events.  For example:

Television One News coverage (watch from 17.37)

For all the links see the Marsden Online Archive Storify page.

On Thursday afternoon Kāi Tahu and locally-based Northland Māori welcomed Hongi Hika, a self-portrait sculpture by the illustrious Ngā Puhi warrior. Bernard Makoare and Hinerangi Himiona of Ngāpuhi and Chanel Clarke, Māori Curator of the Auckland War Memorial Museum, accompanied this taonga who was installed in the Whakapono exhibition upstairs in the Hocken Gallery.  Click here for the full story.

In the evening a good crowd assembled in the Hocken foyer for both the opening of the exhibition and the official launch of the online archive. The event was opened by David Ellison of the Puketeraki Rūnanka of Kāi Tahu, Bernard Makoare, and Kelvin Wright, Anglican Bishop of Dunedin. Particular praise was given to Gordon Parsonson, present in the front row of the audience, whose painstaking work transcribing the Marsden archives over many decades made the creation of the online archive possible.

The Marsden Online Archive was created by the University Library and Hocken Library, with considerable input from Professor Tony Ballantyne and the Centre for Research on Colonial Culture.  This will be of great use to researchers interested in early missionary work, Māori-Pākehā interactions, and Māori culture.

The “Whakapono: Faith and Foundations” exhibition runs till 7 February, 2015. 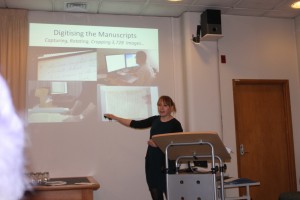 The following two days were given over to “Dialogues”, a symposium on New Zealand’s early missionary history, held in the Hocken Seminar Room organised by the Centre and the Hocken Collections. This was kicked off with Cate Bardwell and Charlotte Brown of the University Library telling the story of how the Online Archive was created, followed with a demonstration of how to get the most out of the collection.

Three well-known religious historians, Allan Davidson (St Johns), Peter Lineham (Massey) and John Stenhouse (Otago) made up the next session. Allan talked on the “dialogue or disputation” in the first Wesleyan mission at Whangaroa; Peter discussed the Anglican moves into the Bay of Plenty/Waikato district in the 1830s, and how this lead to the sacking of the Matamata Mission Station in 1836; and John focused on Octavius Hadfield, his relationship with his Māori parishoners, and how this influenced his opposition to the Crown’s military actions. 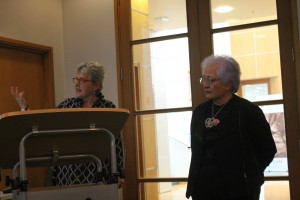 After lunch Angela Middleton (Otago) gave an account of the powerful and influential Hariata, Hongi Hika’s daughter, informed by both historical and archaeological sources. Kuni Jenkins (Awanuiarangi) and Alison Jones followed on with a discussion their interpretation of the encounter at Hohi between Ngā Puhi and missionaries in December 1814.  In the afternoon Donald Kerr gave an account of Dr Hocken’s collecting, and how he managed to amass so much of the original missionary papers, now housed in the Hocken Collections. Anna Blackman, the Archives Curator at the Hocken, then gave a talk on exploring the Marsden Collection, and earlier archival practice. 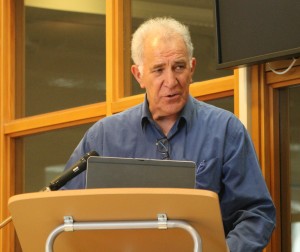 In the evening more people assembled for the launch of Angela Middleton’s new book, Pēwhairangi: Bay of Islands Missions and Māori 1814 to 1845. Manuka Henare (Auckland) formally launched the book, along with speeches by the Rachel Scott, Otago University Press publisher, Sharon Dell, the Hocken Librarian, and Paul Diamond, Curator Māori at the Alexander Turnbull Library. 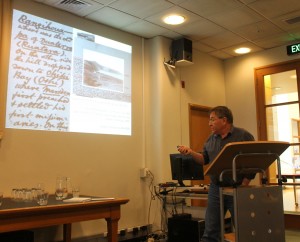 Ian Smith (university of Otago) discussing the site of the Hohi Mission Station.

Saturday was a shorter day. Ian Smith (Otago) gave an account of the archaeological dig and Hohi and how this informs our understanding of this first mission site and its inhabitants. Chanel Clarke and Rose Young (Auckland War Memorial Museum) discussed “Taonga Tuku Iho – Objects in Dialogue”, objects from their collection that spoke to the early interactions between missionaries and Māori. 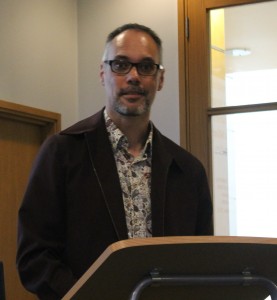 After morning tea, Lachy Paterson (Otago) discussed Thomas Kendall’s dialogues with Marsden and the CMS on developing a working orthography for the Māori language.  Paul Diamond (Turnbull) followed on, bringing to light a Māori vocabulary created by the Wesleyan missionary, Rev James Buller, in the 1830s and what this can tell us the Māori language of that time. After lunch, Tony Ballantyne (Otago) rounded off the symposium with a discussion on how applying new techniques from the field of digital humanities can give new historical perspectives, particularly when working with large collections. 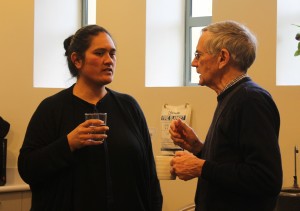