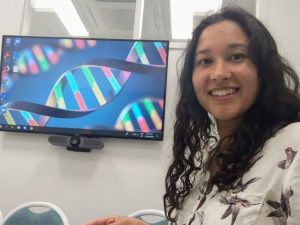 Away from her work in genetics – currently as a “baby bioinformatician” – Anna Clark likes to meditate. But forget joss sticks and yoga poses; what Anna has in mind is the “adrenaline meditation” of surfing and white-water kayaking.

“It’s more a mindful awareness or definitely a mindful state of consciousness,” Anna explains, “forcing you into the present with every stroke, reading the water.”

While this might seem a world away from the biological data interpretation (the ‘bioinformatics’ bit) that’s been a large part of her Masters’ degree, for Anna there’s a clear link. 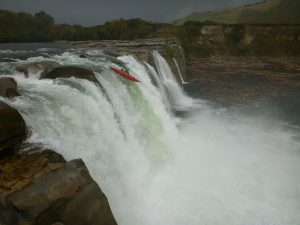 “Being out in the wilderness and experiencing the problems first-hand makes me appreciate why I’m doing this work,” she says. “When I am sitting in my office challenged by the fine details of my project, I have to bring myself back to the wider picture.”

And Anna’s ‘wider picture problems’ are increasingly urgent for New Zealand: the seemingly never-ending threats our native flora and fauna face from invasive pests, such as possums, stoats and rats.

She’s one of a growing number of young, “purpose-driven” geneticists who want to use their scientific know-how and enthusiasm for wider community benefit – in her case, through conservation.

“I came into this [studying genetics at Otago] with a problem I wanted to solve: pest control.” 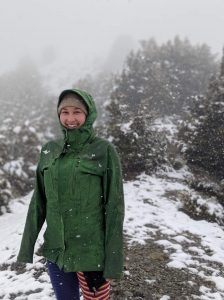 Not that such a science-based ambition would have been obvious when she was growing up; her family were organic farmers wary of modern science, especially genetic modification. It was only when she joined a conservation group at high school and saw the damage done by invasive species, that Anna felt “a switch over” in her perspective, along with a growing curiosity about the social resistance to the topic of genetics.

“My parents taught us to be independent thinkers and I wanted to know what was going on here,” she says. “To understand the science [and ask] where’s the evidence for what works?”

However, she also appreciates “the emotional drive” behind opposition to genetic technology.

“There needs to be more engagement with affected communities who feel like their values are being disregarded,” she reckons. “I think it’s very, very important for scientists to have the courage to listen to others and to others’ opinions. We have a social obligation to engage, and to think and talk about our research.”

So Anna tries to walk the talk when she’s travelling around New Zealand having “off-the-cuff conversations” about saving our living taonga (treasured) species.

“I want to figure out why people believe what they do,” she says. “If I introduce the concept of genetics, most are really interested – and some even get frustrated that they haven’t heard of its potential application outside of food and medicine. I think these are vital conversations to be having, particularly for the recruitment of young scientists. Everyone wants to know the ‘why’ and ‘how’ your work applies to them.”

Yet while she’s happy to spread the word – “You can’t stop me talking about my research,” she laughs – she’s also aware of what she still doesn’t know.

“Career-wise, I’m taking it one step at a time,” she says. “I feel like I haven’t experienced enough to know just yet.”

So once she finishes up with her COVID-delayed Masters’ (focusing on genetic controls for rodents such as the Ship rat, Rattus rattus), a world of further learning opportunities beckons – along with some well-deserved white-water meditation, of course!