When Conservation and Combat Collide

A coin toss at the end of Josh Gilligan’s first year at Otago could, via an intriguing series of steps, help conserve a kaleidoscope of our native plants and insects.

And like any good story, this one’s full of unexpected twists and turns.

So let’s begin at the end – of Josh’s first year studying biology – when the decision to take genetics in second year came down to a simple toss of the coin.

“When I went to the first genetics lab and the lecturer said ‘we’re now going to mutate some bacteria’, I was immediately hooked,” Josh says. “I just fell in love with every weird aspect of it.”

Fast forward a few years, and Josh was “thinking of genes as Lego building blocks to work out how a protein functioned” during a summer studentship in synthetic biology. Next, it was Honours, looking at enzymes in glycolysis (the metabolic pathway where glucose is converted into energy).

“I found it exciting and engaging,” he says. “It gave me the drive to keep going, even when experiments failed.”

At the same time, Josh was training hard for his black belt in Taekwondo: “If you’re spending your whole day thinking, then it’s nice to blow off steam.”

Though in this case, ‘nice’ meant “fighting people for an hour straight”, followed by breaking boards “until nothing’s left in the tank”. And if martial arts sounds miles away from the genetics lab, Josh reckons there’s lots in common.

“Self-control, integrity, perseverance – and once you’ve fought 60 people in a row, a PCR [polymerase chain reaction] failing is no big deal.” 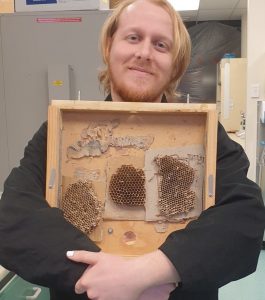 Josh holding a ‘pseudo-nest’ that they use to keep the wasps in captivity. Photo Credit Gemma McLaughlin

With his black belt safely (ahem) under his belt, Josh next became an assistant research fellow, whose initial job was tracking down pollen sources in samples of honey. This led to work in a project looking at molecular ways to knock out the genes of invasive vespula wasps, then eventually to another pest species, the European paper wasp.
Unlike vespula wasps, which can be controlled with poisoned bait, paper wasps “prefer live insects”. Unfortunately, Josh explains, in New Zealand, this means these wasps “killing and eating our native butterflies and moths”.

As the paper wasp is spreading southward through the country, this is bad news for much more than tasty native insects. “New Zealand’s ecosystem evolved with native pollinators, including our butterflies and moths,” Josh says – and if the pollinators go, then that threatens our native plants as well.

“I want to look at techniques to get rid of these wasps before they become a major issue,” Josh says. It’s a motivation that’s led to his proposed PhD: “How can I do that in a way that only affects wasps in New Zealand?”

His initial idea is “to try find genetic variants that are only found in New Zealand populations”.

And while this will take much more than simply tossing a coin, the determination and dedication that have got Josh this far will undoubtedly see him right.

(Did you know: The collective name for wasps is a ‘nest’ or ‘swarm’; for butterflies it’s a ‘kaleidoscope’ – and for moths it’s a ‘whisper’.)