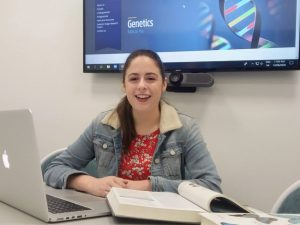 When Sarah Inwood tells visiting schoolkids about her research, the response is always: “Urgh! That’s so gross – tell us more!”

That’s because Sarah’s PhD subject is both gruesome and fascinating; a parasitoid wasp that not only injects venom and an egg into its weevil prey, but whose larva then eats the still-living victim from the inside out. She’s studying the genetics of how the wasp does what it does. Or rather, working out how the grass-eating weevil has now become better at fighting off its parasitic predator, at least in New Zealand. To investigate this, she does everything from collecting the weevils in the field to analysing their genes in the lab, just like on the CSI shows she watched as a kid.

“Sure, things take a lot longer than on tv, but I’m still working with all the chemicals and cool equipment,” she says.

As for gathering the weevils in the first place, this involves using “leaf-blowers in reverse”. 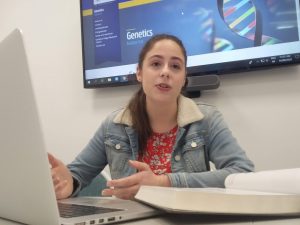 And this is hugely important research. Despite its ghastly reproductive cycle, in New Zealand the tiny wasp is a hero while the grass-eating weevil is the real villain, causing hundreds of millions of dollars worth of damage to Kiwi pastures. When the wasp was first introduced as a biological control in the 1990s, it killed up to 90% of the destructive weevil pests.

Now, though, with these wasps only killing half as many weevils as they used to in some areas, Sarah is part of a nationwide team desperately trying “to figure out how the weevil has evolved resistance”.

There are two main possibilities, Sarah explains: either the weevil is now somehow better at “hiding” from the wasp or else its immune system is now able to kill the parasite. She’s testing the first of these, “whether it’s something stopping the weevil being recognised in the first place.” 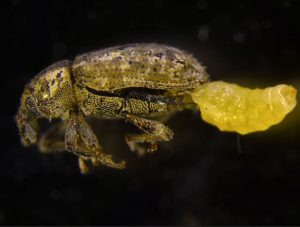 From a genetic perspective, the weevil – officially, the Argentine stem weevil (Listronotus bonariensis) – has an advantage over the parasitoid wasp (Microctonus hyperodae). Because the wasps reproduce asexually, with each one an identical genetic clone of its mother, generation after generation, they evolve much slower than the sexually reproducing weevils.

Sarah’s job, therefore, is tracking down the genetic changes that may have been selected to give the weevil an advantage.

Not that she ever thought she’d be looking at insect pests and biocontrols when she decided to study genetics at university. Yet growing up on a farm in Canterbury, perhaps this field of research was inevitable.

“I knew that Otago had a really good genetics course, but I wasn’t sure what you could do with it…Now I can do something I really love and still be involved with agriculture.”