Keeping People at the Forefront of Medical Genetics 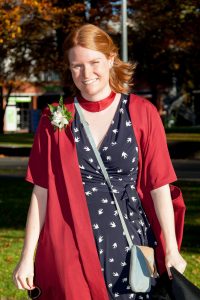 Discovering two of the three genetic variants implicated in a rare disease has been a particular career highlight for Otago medical researcher Emma Wade. Yet meeting and talking with the patients who benefit from her work is even more special.

This human element is hugely important to the Manchester-born geneticist, whose PhD project at Otago focused on a rare genetic disease, Frontometaphyseal Dysplasia (FMD), that causes life-limiting bone deformities. Despite this condition’s rarity, Emma’s research has much broader medical applications.

“We still don’t understand large swathes of the [human] genome,” she explains. “But we’re slowly developing methods to find out. What we learn from rare diseases can then help more widely.”

Emma’s also become much more “computer savvy” to deal with the “huge amount of information on what genes do” – a far cry from what sparked her original childhood interest in popular science. 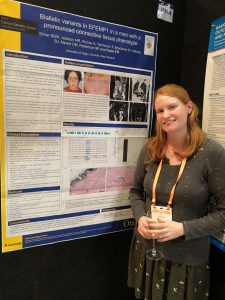 “I was just fascinated by how we usually turn out okay when there’s so much that could go wrong,” she recalls. “Then there was a big anthrax scare that got me really interested in infectious diseases.”

This fascination led to a degree in genetics at the University of York in England, which incorporated a year in a cystic fibrous laboratory in the Scottish capital, Edinburgh.

“I got a taste of genetic disease research and of academia, and the strong clinical link to actual patients was really valuable.”

So when the opportunity arose to combine this all in a PhD at Otago, heading to the ‘Edinburgh of the South’ was a no-brainer.

As for her own ground-breaking genetic discoveries: “Seeing a paper published was really good. I thought, ‘this is actually quite cool’.”

Even more cool was the “really good talk” she then had with an Australian patient with FMD.

“He showed me that they were discussing my research in a Facebook support group.”

Now a postdoctoral fellow in Professor Stephen Robertson’s Clinical Genetics Laboratory at Otago, Emma’s part of a team working with patients and fellow researchers from all over the world.

“The gene we work on is really interesting, mutations can cause about ten different disorders,” she says. “We don’t yet know everything it does, but it has implications all over the body.”