A few weeks ago, IPRU released results and an interactive map of dooring incidents reported by NZ police. Today we report on dooring incidents derived from a “keyword” search of three years of Accident Compensation Corporation data (ACC) data. The query request was initiated by the IPRU (Professor Weiss) and refined and run against claims data by ACC analyst Zhi-ling Zhang, which we gratefully acknowledge. Most of this report is derived from Mr. Zhang’s summary.

Though the data are not geographically based, and thus not geo-coded and mapped like the police data, it is richer in a few details about the person and the costs and levy sources of this separate but overlapping set of dooring related incidents. ACC data appear to capture three times as many cases than police data, even though it itself likely under-counts dooring related cyclist injury in New Zealand.

Numerator data – Three years of ACC claims were examined, from 2010 to 2012. Two  criteria were used to focus on (bi)cycle injuries The first were cases directly coded as cyclist injury in the ACC claims data. Secondly, cases were selected by examining cases with the key words “cycl”, “bike”, “biking” and “bicycle” and without the keywords “motorbike”, “motorcycle” and “quad bike” if they appeared in the incident record.

Denominator data – Dooring injuries were selected by a two step process. If “door” was mentioned in the accident description of a cyclist injury, the event was considered a potential dooring injury. The case narrative was then manually examined to determine if it met the above case definition by the ACC analyst. 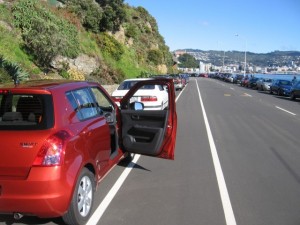 451 cases were identified for a mean of 150 dooring cases per year. 41 (9.1%) cases were hospitalized. Males comprised 63% of the cases. Dooring injuries comprised only 0.29% of total ACC cyclist injuries estimated in the period. Note that cycle injuries used in this denominator could have been off road, on lawns, on drive ways, or even stationary, i.e., they are not necessarily traffic or even transport related (repairs, tripping over, pinched by, etc).

ACC data captures three times the number of dooring injuries as police data, though overall the population does not appear to be much different in terms of age and gender. About 30% of the cases and about 12% of the costs of the partial non-hospitalised payments are not borne by the Motor Vehicle Account. These data provide an important additional context with which to understand the incidence, nature and funding sources for the costs of bicycle-car dooring related injuries in New Zealand.