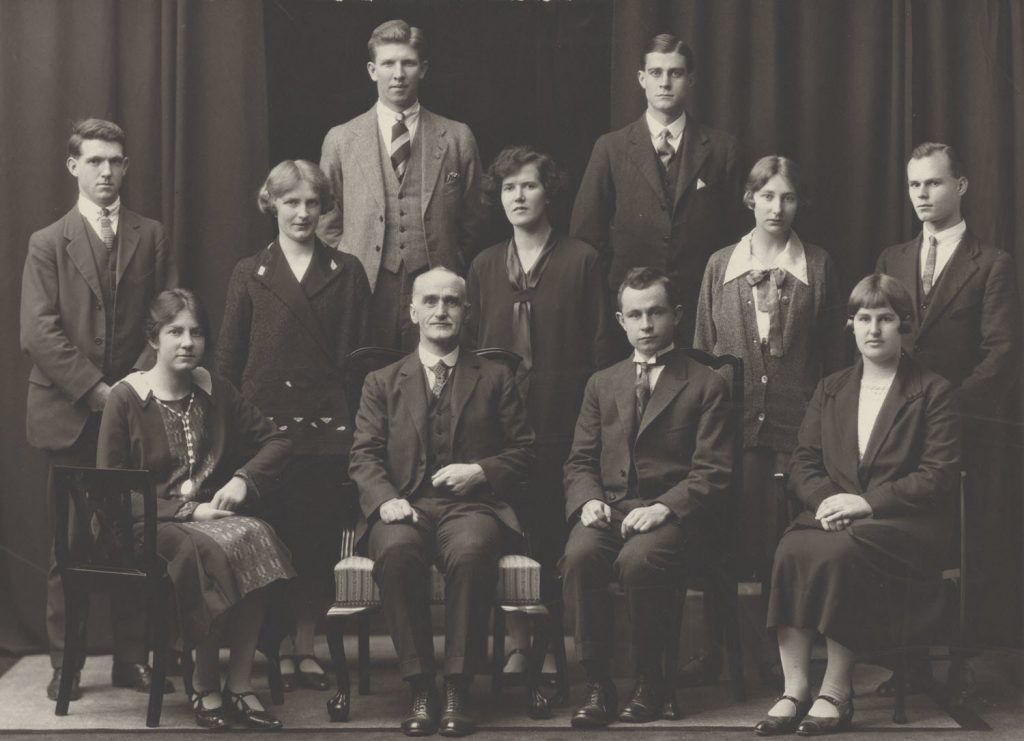 The University of Otago’s own Professor Robert Jack made the first public radio broadcast in New Zealand one hundred years ago today, on 17 November 1921. Jim Sullivan records that he “continued the transmissions two nights a week and the programmes – a mixture of announcements, live music, and gramophone records – were heard in all parts of the country and even on a ship near the Australian coast.”

Robert Jack is seated at the centre in this photograph of the university’s Physics Department staff and senior students, taken in 1926.

Professor Jack’s colleague Agnes Blackie (seated on the left in the photo) described him: “In everything, Dr Jack’s aim was perfection. This showed itself in many ways: the laboratory place-cards that he printed so beautifully by hand, the finely-written lists, the tidiness of the department. His standard for himself was also his standard for his students and woe-betide them if through carelessness, they fell short of it. Dr Jack’s insistence on punctuality has become legendary: ‘You’re late, Mr Smith.’ ‘No I don’t think so; the clock is just striking,’ ‘Well, you’re nearly late!’ Yet he could easily be disarmed by the right approach as in the case of the student who when asked fiercely whether had had any excuses for lateness replied, ‘Plenty, Doctor, but no reasons.'”

“Dr Jack was a splendid lecturer, illustrating his lectures with experiments skillfully demonstrated and enjoyed as much by the lecturer as by the students. His popular lectures for the public of Dunedin were great occasions: lecture-room packed, lecture-bench crowded with apparatus and the audience lifted out of themselves by the lecturer’s own enthusiasm.”

“To a very sensitive nature was added the strain of nerves stretched taut by serious overworking. It was, however, only a very blind student who did not see through the protective barrier of sternness to the warmly human man behind.” (ref: MS-4443/051).