Johnny Cooper (the ‘Maori Cowboy’) was a local rock’n’roll hero.

Cooper grew up on a Te Reinga farm in the 1930s, becoming a fan of Gene Autry during his childhood. While living with his aunt and uncle, he listened to their 78rpm disc collection, his favourites being Autry, Tex Morton, and Wilf Carter. Cooper learnt to play the ukulele along with the records, soon performing to shearing gangs.

After gaining a scholarship and attending Te Aute College for two years, he went to Wellington and found work as a gravedigger. Not long after, he formed a country and western band with Will Lloyd-Jones on slap bass, Ron James on piano accordion, Don Aldridge on steel guitar, and later, Jim Gatfield on guitar. They called themselves Johnny Cooper and the Range Riders. 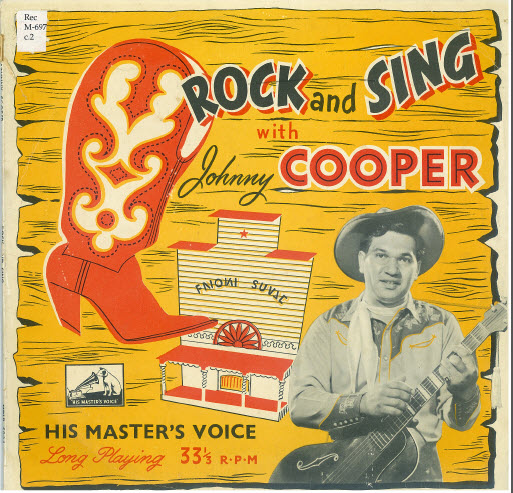 The band entered talent competitions, coming first in the talent quest at Wellington’s Paramount Theatre, winning £20, and an audition with HMV. In 1954 Cooper went to Korea to entertain the New Zealand troops, and on returning, HMV asked the band to record with the label. This resulted in their first hit, a duet with Margaret Francis of a cover of One by One, backed with Cooper’s own song Look What You’ve Done – a song that found another life 40 years later when it featured in ‘Once Were Warriors’. HMV then approached Cooper about recording a new genre: rock’n’roll. HMV were keen for Cooper to cover Bill Haley and the Comet’s smash Rock Around the Clock, though Cooper was sceptical, and didn’t really like the genre. However, he recorded it (and the b-side Blackberry Boogie), and it became a hit. Interestingly, Cooper’s version was released locally before Bill Haley’s version.

In 1956, HMV released its first New Zealand rock album, ‘Rock and Sing with Johnny Cooper’, a 10” compilation that placed his country recordings with Rock Around the Clock, and Blackberry Boogie. Cooper also released a second rock’n’roll cover by Haley – See You Later Alligator in 1956 (this time on 45prm as well as 78rpm disc).

Cooper’s third single made him a significant name in local music history. Pie Cart Rock’n’Roll (1957) was (as the story goes) about the Whanganui pie cart, where Cooper and the band would get their ‘pea, pie, and pud’ meals. Pie Cart Rock’n’roll was considered the first locally written rock’n’roll song. However, this is thought to be incorrect – Sandy Tansley’s 1957 song Resuscitation Rock (according to researcher John Baker) was released a few weeks before Pie Cart Rock’n’roll in September 1957.

Cooper and the band kept their audiences broad by appearing in variety shows. In the late 1950s he began the ‘Give it a Go’ talent quest, with musicians such as Mike Nock, John Rowles, and Midge Marsden appearing. The talent shows ended in 1968, and Cooper released his last single, Break the World in Two / Cold Cold Heart on Impact. He continued to perform in the 1970s as The Johnny Cooper Sound, and in the 1980s as part of the Original Ruamahanga River Band. He retired in the 1990s.

Johnny Cooper was 85 when he passed away last week at his home in Naenae.