Every now and then, often in an obscure part of the archives collections, I come across one of those ornate old letterheads or billheads so many businesses used to have. These often show the printers’ great artistry and skill, and intriguingly encapsulate the identities of businesses in a way that might now be considered to be branding.

Here’s one of my favourites. Dated 31 May 1898, it’s for W. Evans & Co. and depicts the mills which produced ‘Crown’ brand flour in Dunedin and ‘Atlas’ brand flour in Timaru. The design and engraving work by Dunedin firm Fergusson & Mitchell is elaborate. Sheaves of wheat curl around to form an imaginative border, and the perspectives of the buildings have a wonderful naivety to them. The address for telegrams is given (‘Evans’) and the Timaru mill has the easy-to-remember telephone number ‘5’. In front of the Dunedin building are horses and carts loaded with bags of flour. The Timaru mill was next to the railway line, so an engine and wagons can be seen. 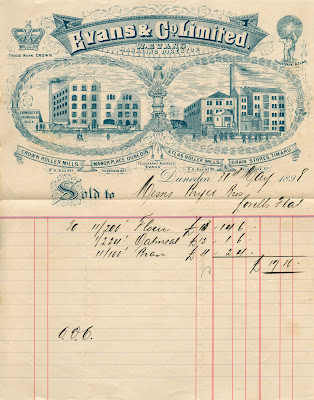 These were roller mills, then a recent development in New Zealand, which used cylindrical rollers for grinding rather than traditional grindstones. Timaru’s Atlas mill, designed for Evans & Co. by Dunedin architect James Hislop, opened with this latest equipment in 1888. Dunedin’s Crown mill had been built for Anderson & Mowat in 1867 and converted to a roller mill for R. Anderson & Co. in 1891. Additions to the buildings at this time were also designed by Hislop. This mill was taken over by Evans & Co. in 1896. The managing director, William Evans, had begun his career in New Zealand as a storekeeper on the goldfields, having arrived from Victoria with the rush to Gabriel’s Gully in 1861.

Both mill buildings, although they no longer produce flour, remain prominent landmarks in Timaru and Dunedin.

This entry was posted in Business history, Graphic art, Printing and publishing by Anna Blackman. Bookmark the permalink.

One thought on “Curious letterheads and billheads #1”