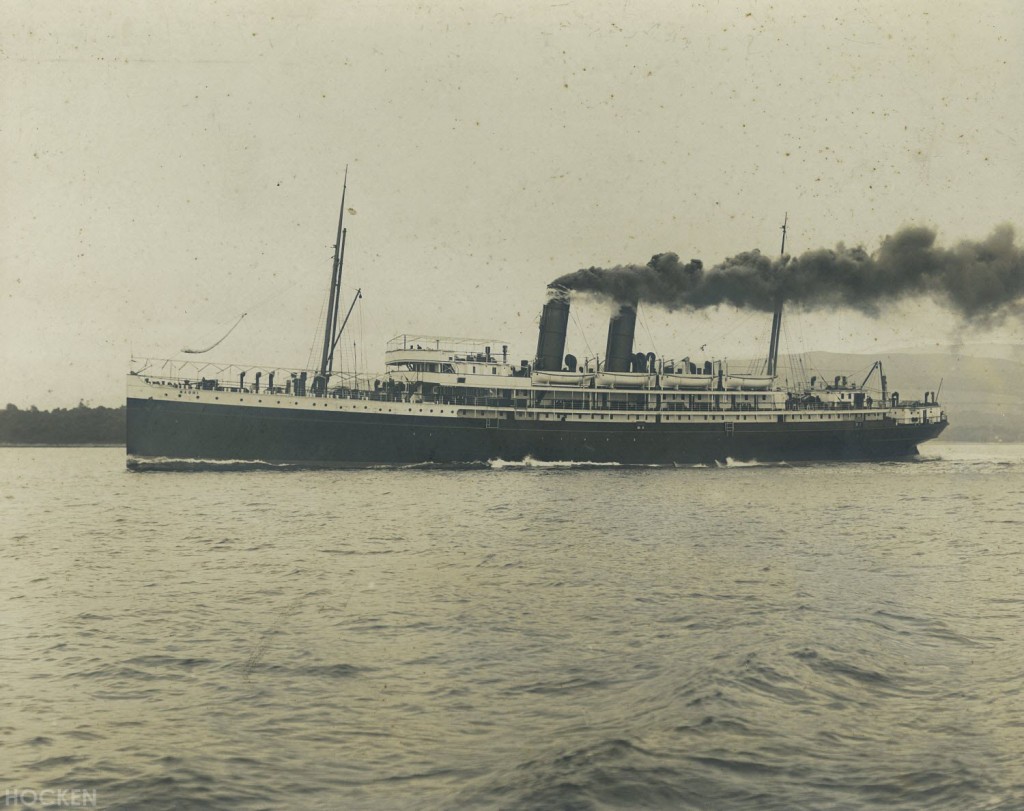 In the winter of 1908, a curious complaint was sent to the Union  Steam Ship Company. It concerned a lost boot …

The U.S.S.Co is noted for the care of and Courtesy extended to its Passengers. These pleasing qualities I am able to amplify from personal experience on many occasions, BUT, “The best laid schemes of mice and men gang aft agley”.

On the night of the 13th inst I boarded the S.S. ‘Maori’ en route to Lyttelton, “clothed and in my right mind”.

I retired (as sole occupant) to Cabin 34, and in due course sought oblivion in sleep, previously having disrobed, even boots and all!!! which boots, as events proved, I had better have kept on.

When the time arrived to dress on the morning of the 14th, only one boot belonging to yours truly could be found on the ship.

Not having a wooden leg, this was inconvenient and necessitated my leaving the boat in slippers.

Now I have never desired to form one of a party to explore Arctic of Antarctic regions, but whilst crossing the white-frosted wharf at Lyttelton to board the train, I felt as though I were going through an involuntary course of drill or training for such a project.

This idea was intensified during the cold railway journey to Dunedin.

I have all my life believed that many Biblical quotations can be aptly applied to incidents in our every day life, I am now more than ever confirmed in this belief – St Matthew 24ch[apter] 40V[erse] “The one shall be taken and the other left”.

This is not a claim, therefore it suggests a “bootless” matter altogether – JD 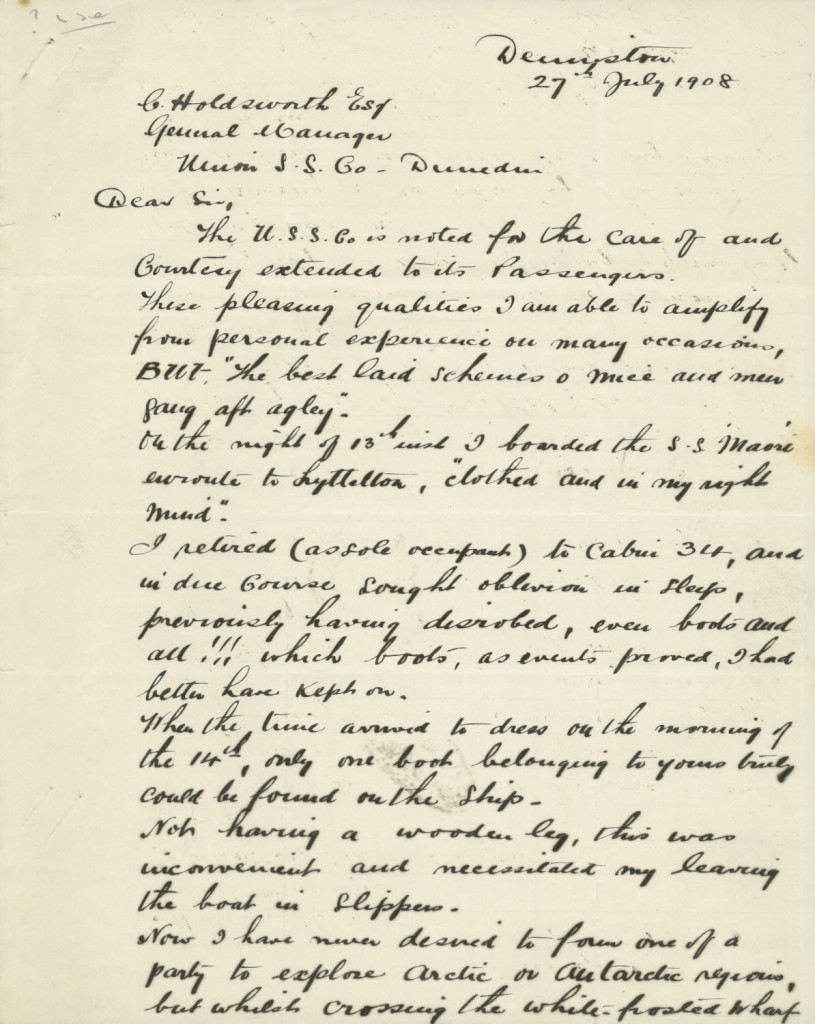 The letter was meticulously filed, but disappointingly there’s no sign of a reply from the company. Dixon’s letter was addressed to General Manager Charles Holdsworth, who was on an overseas trip at the time. A newspaper notice in the Evening Post confirms that a Mr Dixon travelled from Wellington on board the Maori. 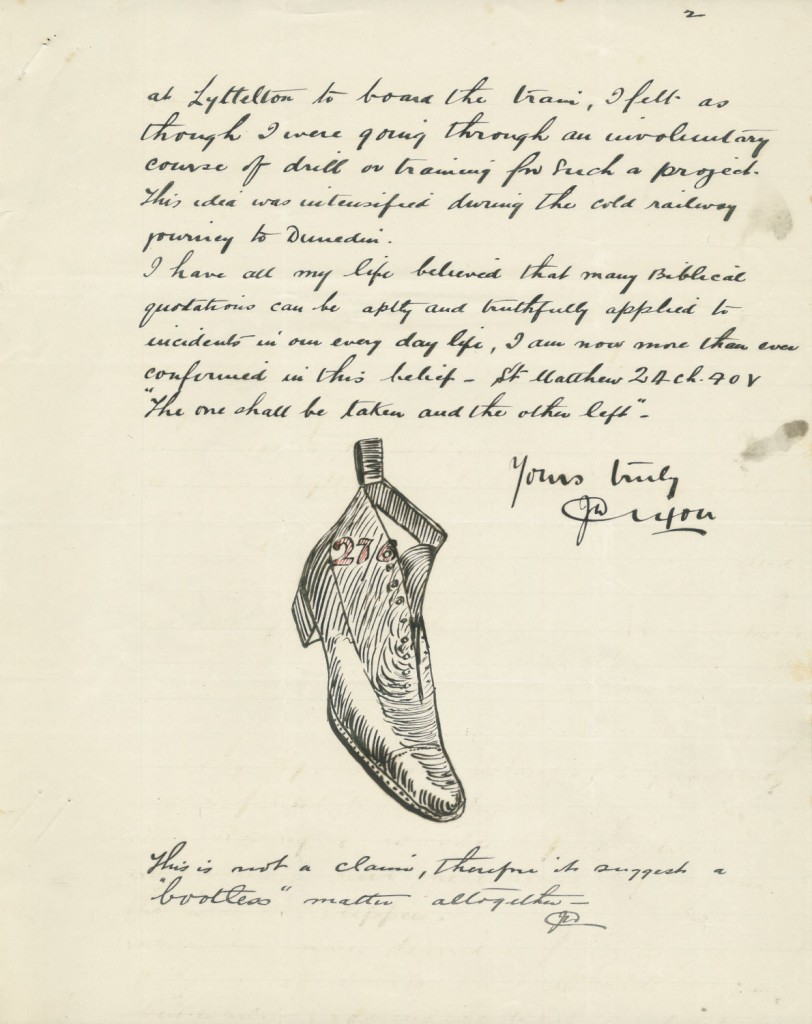 The writer was apparently Jonathan Dixon (1853-1911), manager of the Denniston Mine on the West Coast. He had an adult son who was also named Jonathan, and it’s possible he was the author, but the handwriting is a good match (though not conclusively) for the signature on Jonathan senior’s will.

According to the Cyclopedia of New Zealand, Jonathan Dixon was born in Durham, England, and educated in Sydney. He was a mine manager in New South Wales and was involved with the restoration of the mine at Stockton following a disaster in 1896. He took similar roles at Dudley, Greta, East Greta, and Burwood. He arrived in New Zealand in 1899 to manage the Millerton Mines (Granity) for the Westport Coal Company. After about two years as mines inspector in New South Wales, he returned to the West Coast to take up his position at the Denniston Mine, again for the Westport Coal Company. 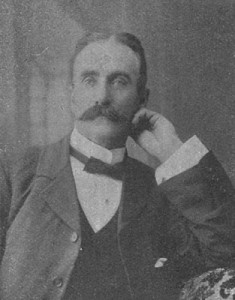 Dixon, who was married and had seven children, was described as a man who had ‘literary attainments and a taste for poetical composition’. An obituary stated that he was ‘a well-read, brainy man, with a decided literary bent, and would have made his mark in journalism had he abandoned mining’. He was also a strong supporter of educational movements and a staunch advocate of temperance. He died in August 1911 at the age of 58, following an operation for appendicitis.  His illustrated story of the lost boot survives as an example of his wit, and one of the cuter curiosities of the Hocken Collections.

Thanks to the Papers Past and Trove newspaper databases, and to Archives New Zealand Christchurch Regional Office for providing access to Dixon’s will and probate file.

This entry was posted in Archives and manuscripts, Ships and shipping and tagged Humour, Travel by Anna Blackman. Bookmark the permalink.

3 thoughts on “The Lost Boot”