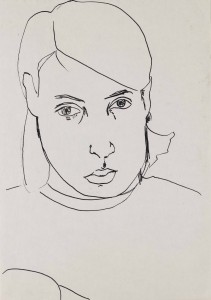 Both artists have strong ties with the University being past University of Otago Arts Fellows. Paul was a recipient of the Frances Hodgkins Fellowship in 1983 and McQueen was Burns Fellow 1985 and 1986. McQueen’s first poetry collection Homing In (John McIndoe Ltd: 1982), included a poem Paul titled “Joanna”. She penned a second poem dedicated to her friend after Paul’s untimely death in 2003. McQueen credits Paul, who was also an accomplished poet, with showing her that McQueen herself was a visual artist. 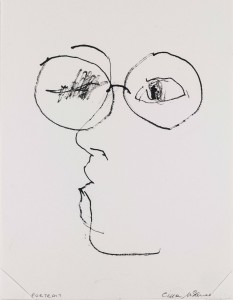 The Hocken is home to hundreds of artworks by both Paul and McQueen, many of which have been gifted by them or in the case of Paul, her estate, who generously donated nearly 200 of her sketchbooks in 2008.

The exhibition focuses on works from the 1970s and 1980s, created while these artists were living in Dunedin. It includes twenty-eight artworks (predominantly works on paper), published work, musical scores, artist’s books and ephemera relating to the life and work of these two creative women.

Many of Paul’s works in this show have not been exhibited before. Most of the works are drawn from the Hocken’s extensive art collection but a small group of works have been borrowed from her Estate.

A double portrait by Paul (c.1970) recently gifted to the Hocken came from the collection of the late Michael Hitchings. The painting features Michael and his former wife, Maureen Hitchings. This couple, like Paul and McQueen, contributed to the shaping of Dunedin’s cultural outlook during this period. Michael was Hocken Librarian from 1965 to 1984 and Maureen ran the Dawsons Gallery where Paul exhibited in the 1970s.

The Hocken has a wealth of other material relating to both Paul and McQueen. The archives collection houses the literary papers of Cilla McQueen and the business records of Dunedin’s John McIndoe Ltd, the publisher of McQueen’s early poetry collections. There are letters from Joanna Paul to Deidre Airey, Ruth Dallas, Charles Brasch, Hone Tuwhare, Heather Murray and others, including to Cilla McQueen.

Despite working predominantly in different artistic fields their approaches have common features including an interest in juxtaposing pictures and poems and the visual arrangement of words on the page. In the 1980s it was not as common as it is now to create interdisciplinary work. In correspondence with the exhibition’s curator Natalie Poland, McQueen writes: “The works on display date primarily from the 1980s and show that both women were informed by experimental approaches that blurred the conventional boundaries between art, literature and music. Their pictures and poems celebrate the richness of the everyday experience and the local environment. The freshness of their drawings, use of collage and surprising combinations of images and text enliven ordinary language and convey a sense of living intensely in the present moment.” [Source: Unpublished memoirs, email to Natalie Poland May 2011, now in Hocken’s artist’s files.]

An artwork by McQueen called Sequestered (2009) was purchased by the Hocken in 2010. McQueen made it by scratching text onto a series of six outmoded computer floppy discs that contained a late twentieth century manuscript by McQueen. The texts, etched into the surface of the black circles, are partly occluded with red seal wax, an evocation of other modes of communication that are facing obsolescence – the tradition of handwritten letters. 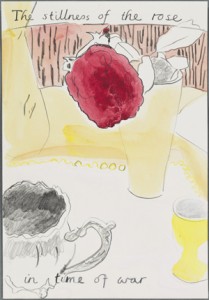 One series by Paul makes its debut in Picture/Poem – Untitled (The Stillness of the Rose . . .), 1974-1980, comprises seven water-colour and pencil works conceived to be viewed as a single creative work. Curiously each separate piece of this work was created on the same day over a period of seven years. Each part contains a fragment from the poem ‘The Rose’ by American writer William Carlos Williams. This work was purchased by the Hocken just this year.

This entry was posted in Acquisitions, Authors, Exhibitions and events, Fellowships, Painting and Painters, Poets and Poetry by Anna Blackman. Bookmark the permalink.