In June 1939, the first ever issue of the New Zealand Listener was sent free to all households with a radio licence.  As the official journal of the state-owned New Zealand Broadcasting Service, its original brief was to publicise radio programmes and publish content related to broadcasting.  The first editor liberally interpreted ‘broadcasting’ to encompass all human affairs, including the arts in particular.  Consequently the Listener became an important contributor to New Zealand literary life, with many major writers among its reviewers and short form fiction contributors.

Looking through our holdings, I encountered a constantly evolving format in both dimension and design. The original focus as a visual accompaniment to the auditory world of radio has gone full circle, with radio’s place in the magazine having been gradually usurped by television, and now also internet-related content.  Radio New Zealand’s weekly programming highlights are currently allocated a mere one page per issue.

Here’s a taste of some randomly discovered content that caught my imagination:

The ragdolls on the cover of this June 1944 issue are promoting nationwide toy making contributions for the 734 Polish refugee children about to arrive at the Pahiatua camp that would be their temporary home for up to four and a half years.  The associated article provides details for readers to write in and buy a toy pattern at a cost of one penny, the pattern choices being:  duck, owl, rabbit, elephant or a Humpty Dumpty.  The article provides an insight into soft toys of the day, describing considerations such as: the type of cloth to use (animal skin not recommended); type of stuffing (options given are wood-wool, scoured-wool, rags, flock or sawdust); procuring fencing or fruit-case wire to provide stiffening; and cutting cardboard ovals for the soles of the feet.  The last section describes how to make a paper mache doll, including finishing it with enamel paint so that “it will be washable and everlasting”. 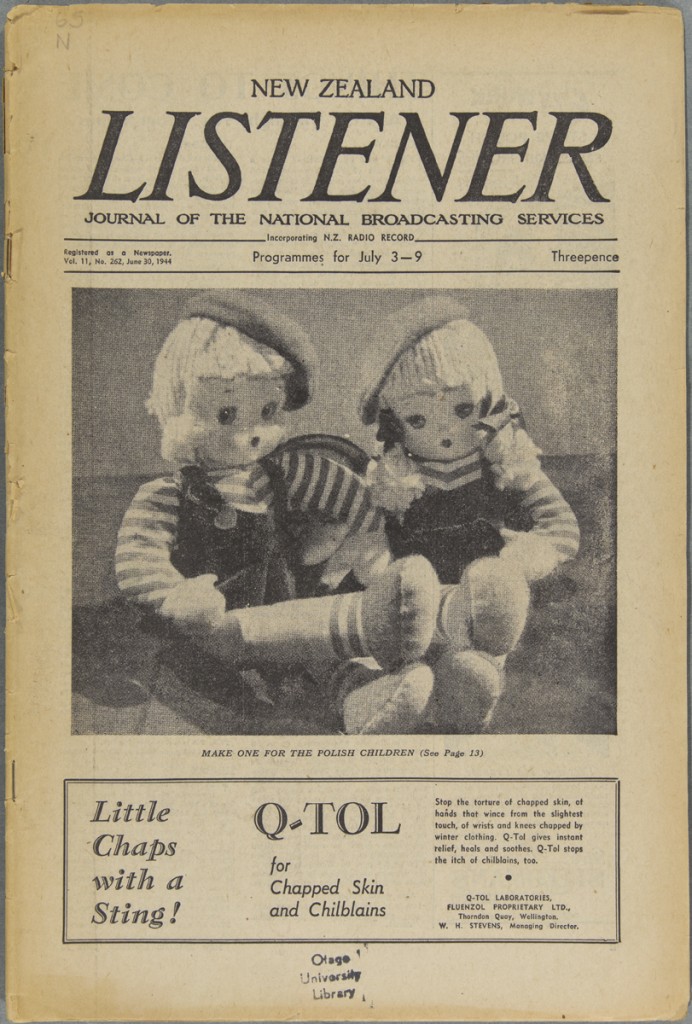 A serial biography beginning in August 1957 marked twenty one years of Aunt Daisy, regular Listener columnist and “First Lady of Radio”.  The Aunt Daisy Story instalments had titles such as:  A Victorian Childhood, New Plymouth Ho!, and The Fairly Gay Nineties.  The first issue containing the series (1957:Aug.2) included a pull-out photograph of Aunt Daisy (unfortunately this insert is missing from Hocken’s copy).

Advertisers jumped on the bandwagon, hastening to associate their varied products with Aunt Daisy’s trustworthy image. 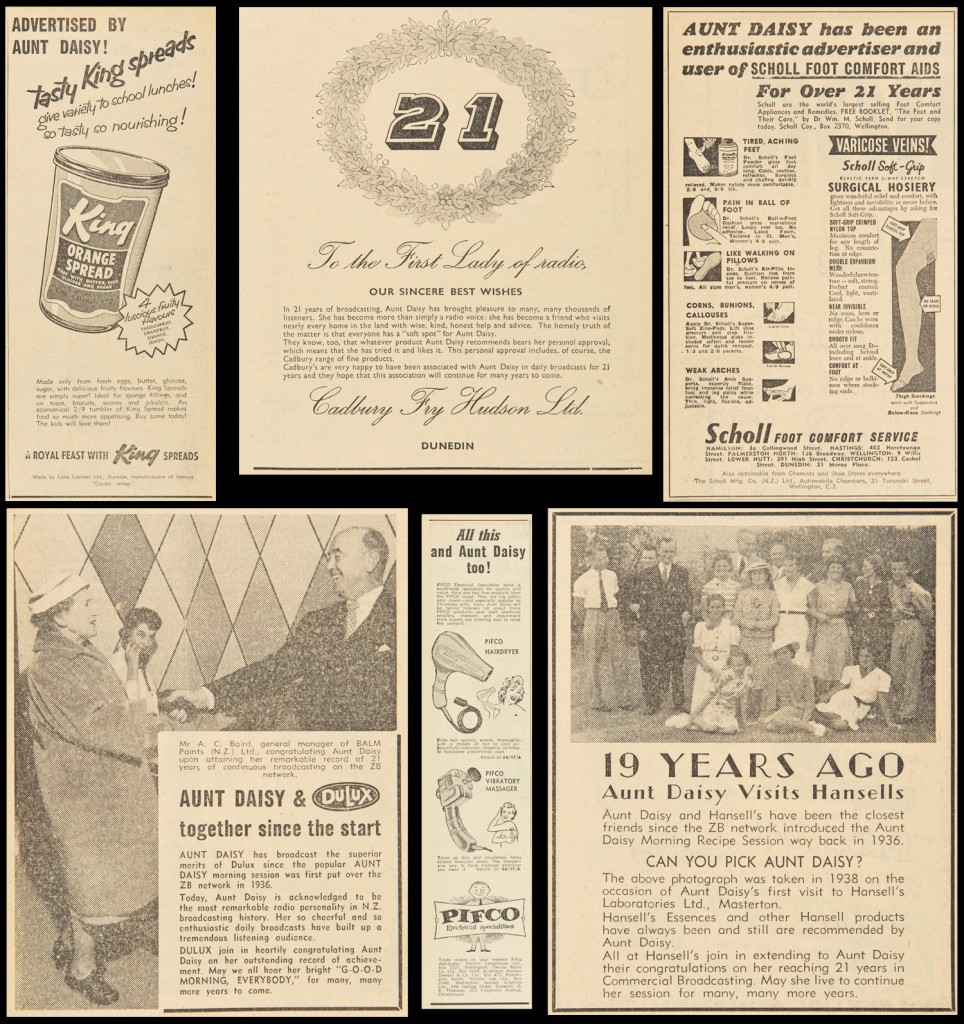 The page below shows the format of the single page per issue dedicated to television that was typical of the early 1960s. The Monday to Sunday listings take up very little space, as television was broadcast only two hours per evening on a single channel.

The television page always included a story on current programmes or personalities.  The article below describes Puppet Playhouse, a local programme featuring 23 year old puppeteer Greer Twiss (better known now for his career as a sculptor).  Puppet Playhouse was a family affair:  Greer made the marionettes, his mother the costumes and his father the props and set.

Channel 2 has just acquired a new announcer called Mr Throgmorton.  Viewers will excuse his somewhat wooden features when they see him, because Mr T. is a puppet who introduces the new Wednesday feature, Puppet Playhouse. 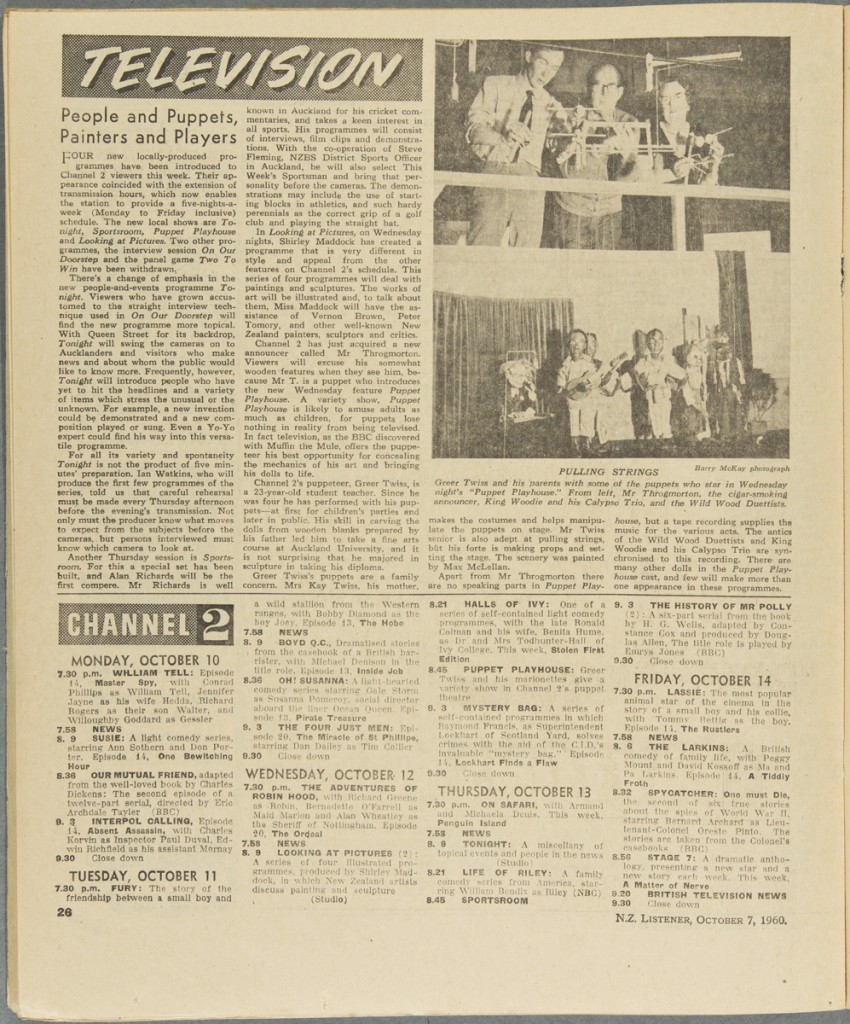 In contrast to the relatively low key one-page inclusion of programme listings when television made its New Zealand debut in Auckland less than a year previously, this issue excitedly announces its arrival to Wellington and Christchurch, claiming that “about half New Zealand’s population will soon be able to watch television” 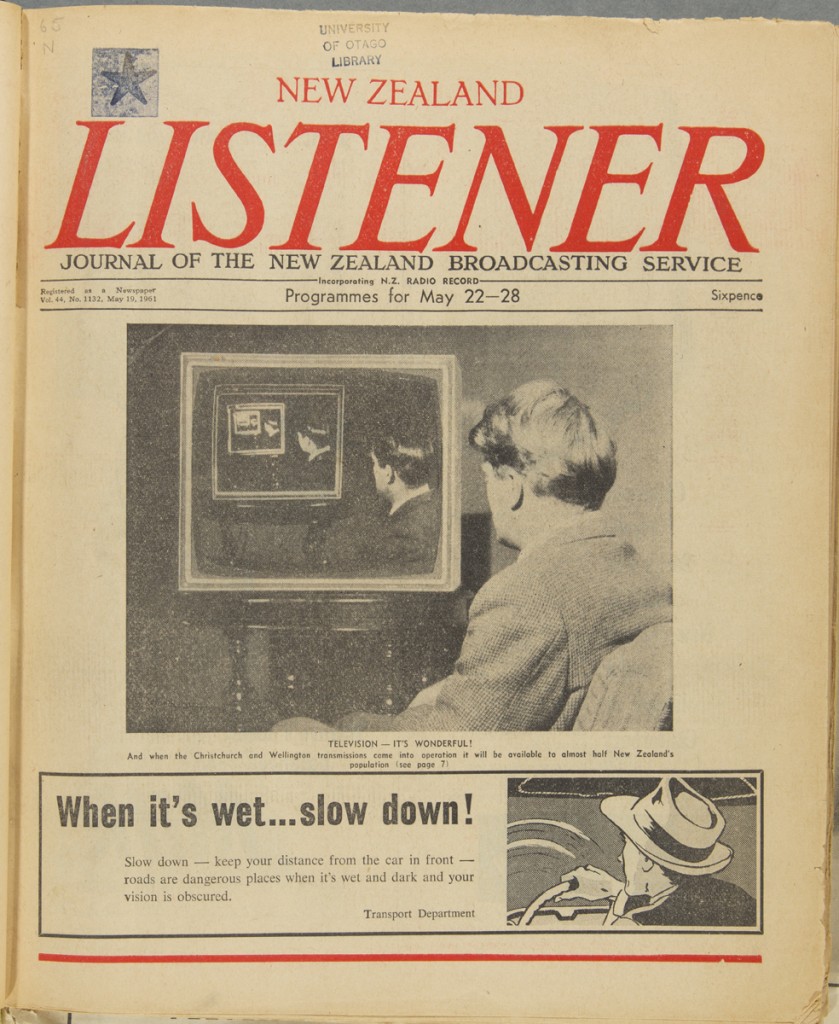 The article provides advice concerning the placement and size of the television set – quite the contrast to the popular super-sized television screens of today!

The best size of screen occupies 12 to 15 degrees of the viewer’s field of vision and does not require him to move his eyes or turn his head to see different parts of the picture… A viewer should seat himself at a distance from the set equal to five times the screen’s height.

This January 1973 cover shows the move to full colour and the larger magazine format that persisted until 1989. 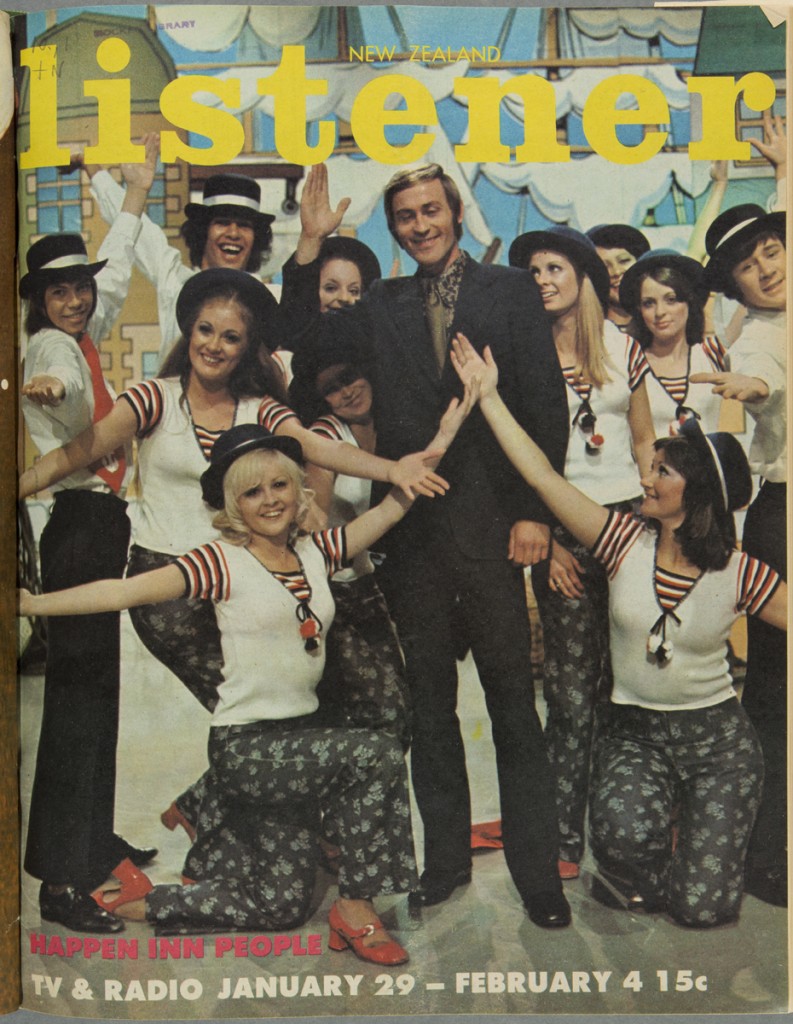 Turning the cover reveals a two-page spread of monochrome photographs by Robin Morrison documenting the exploits of the “Happen Inn People” during their summer break. 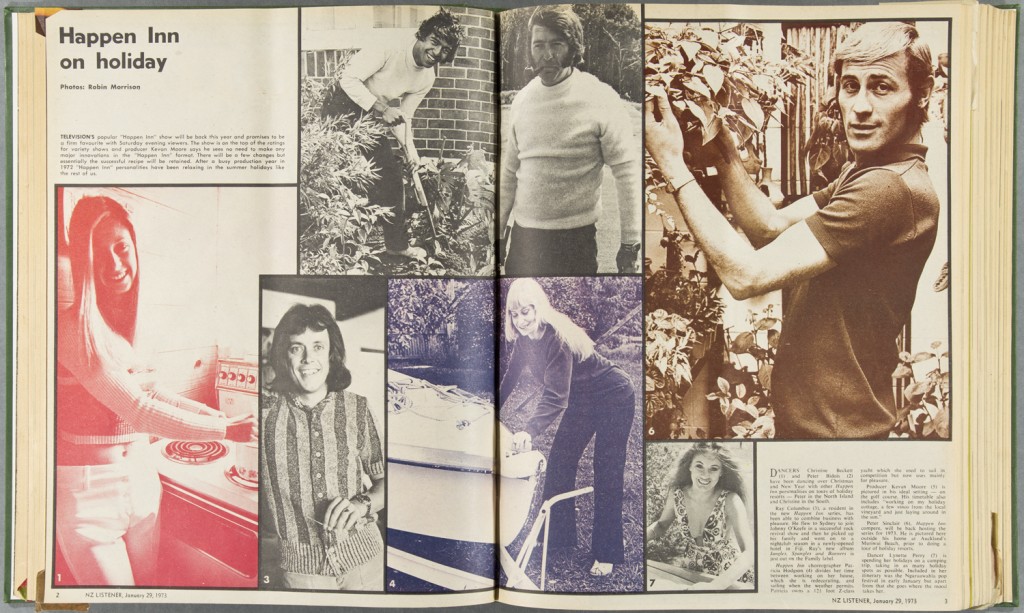 Unfortunately, Hocken’s holdings of the Listener’s first three years are extremely sparse (only one fragile issue from late 1939), and we also have many gaps in later years. We will gratefully receive donations of early issues – please contact the Periodicals team (serials.hocken@otago.ac.nz) for details of collection gaps.

16 thoughts on “Seventy five years of the New Zealand Listener”