Preparing the wall labels for the upcoming ‘Peeps of Life’ exhibition, I had been wondering where these two girls were standing when their father, John Halliday Scott, took the photograph.  Chances were it was on that long sandy stretch of beach between Moeraki and Hampden where the family went for holidays around the turn of the twentieth century.

I tried google-earthing but could only land on the highway so when my friend and I were driving back from Trotters Gorge on Otago Anniversary weekend, we stopped for fish and chips by the sea at Hampden.  A snapshot taken on the iphone answered the question and now when I look at Marion and Helen Scott in their wonderful bonnets, I think of the best battered fish I have ever tasted and the delicate young feathers of the seagull standing on the bonnet of the car. 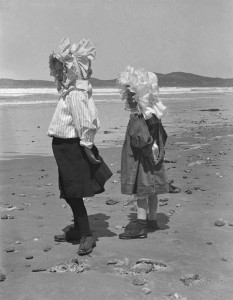 And a similar view taken recently. 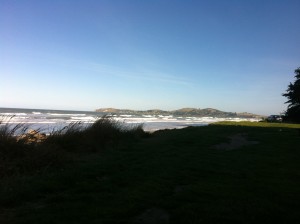 This entry was posted in Exhibitions and events, Historical photographs by Anna Blackman. Bookmark the permalink.