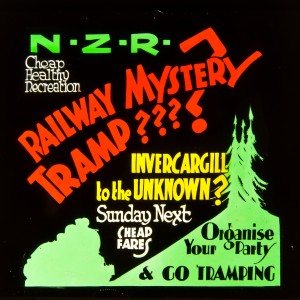 This lantern slide promotes an excursion to an unknown southern destination for a mystery tramp, and was used for advertising to a cinema audience. Recently acquired for the Hocken’s Photographs collection, this New Zealand Railways promotion would have been projected onto the screen of an Invercargill movie house either prior or during a film showing.

Introduced in the 1600’s the magic lantern was the earliest form of slide projector. With the aid of a concave mirror the lantern, illuminated at first by candlelight, projected light through a small sheet of glass known as a lantern slide. By the turn of the twentieth century lantern shows were a popular source of entertainment. They were also integral to commercial advertising in cinema. By the 1930’s many lantern slides were produced by a black and white photographic process and hand-coloured with transparent dyes. As well as being readily used in advertising, theatres also used magic lanterns to project  ‘illustrated songs’, which were community sing-alongs with lyrics and illustrations, and to communicate short messages such as “Ladies, kindly remove your hats”, to their patrons.

At first the burgeoning reputation of motion pictures did not impact on the popularity of lantern shows and they continued to be used for entertainment and educational purposes. However, after the introduction of 35mm Kodachrome colour transparency film in 1936 the use of the magic lantern for cinema advertising was quickly superseded by slide projectors as a result of cinemas being eager to embrace new technologies.

The success of rail tourism during the interwar years, an era when private car ownership was on the rise, may be attributed to the advertising prowess of the Railways Department. Train travel and the popularity of day excursions was also boosted by the shorter working week which gave large sectors of the population more time to enjoy leisure activities. In response to increased competition from the motor car New Zealand Railways established a Publicity Branch and in July 1920 the Railways Advertising Studio was formed. It is likely that they produced the art work for this lantern slide which advertises a Mystery Tramp day excursion. The health benefits of train travel, often overstated in New Zealand Railway’s promotional material for urban rail-services, is merited on this occasion as the day-trip is encouraging participation in an outdoor physical pursuit.

In an age when we are bombarded with advertising images through a plethora of digital channels, researching the history of this glass slide has brought me closer to appreciating the lantern’s ‘magic’.