The first New Zealand scout troop was officially registered at Kaiapoi on 3 July 1908, following the arrival of Baden-Powell’s book ‘Scouting for Boys’ in New Zealand. The movement was formed by Lieutenant-Colonel O. Cossgrove, who became the first chief commissioner.
Originally a branch of the United Kingdom Scout Association, the New Zealand Boy Scouts Association became independent in 1953 and in this year became the Scout Association of New Zealand.  In 1911, the first all-Maori scout troop was formed at Ohinemutu.  Cubbing was introduced in 1916 and Venturer scouting was introduced in 1965.
The records of the New Zealand Scout Association, Otago Area, held at the Hocken occupy over seven and a half metres of shelving and include those of scout groups from all over Otago, such as the Owaka Scout Group, Halfway Bush Scout Group and North East Valley Scout Group.
The collections include a vast array of material, such as minute books, logs, scrapbooks, jamboree papers, newsletters, magazines, photographs and textile banners.
An example of a handwritten, illustrated log of a trip to Port Craig by Andersons Bay Rover Sea Scout Crew, 1955 (image from MS-3486/010): 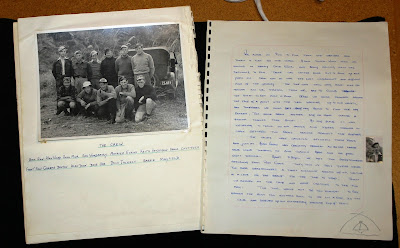 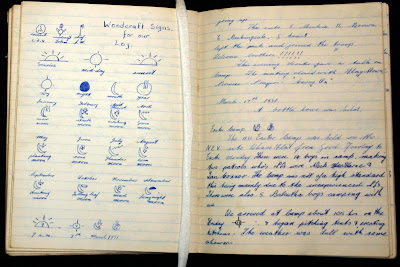 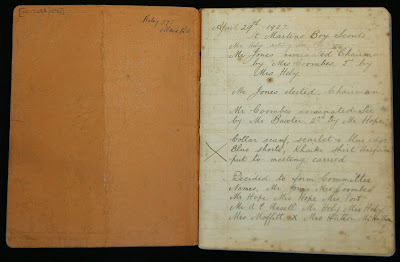 The Rovering branch of scouting was officially started in England in 1917. The First Dunedin District Rover Crew was established in 1926. Handwritten, illustrated log of a caving trip to Dunback by Andersons Bay Rover Sea Scout Crew, 1954 (image from MS-3486/009). 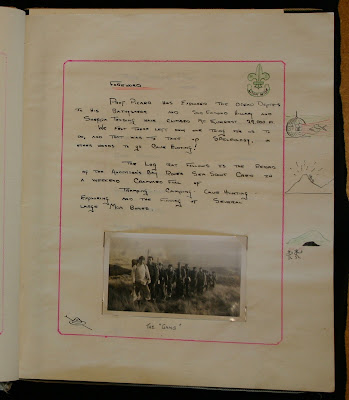 There are approximately 16,000 Scouts in New Zealand.  In the lower South Island there are currently 50 active scout groups, 12 Venturer Units and 2 Rover Crews.  There are plenty of newsletters being produced to keep people up to date on developments: 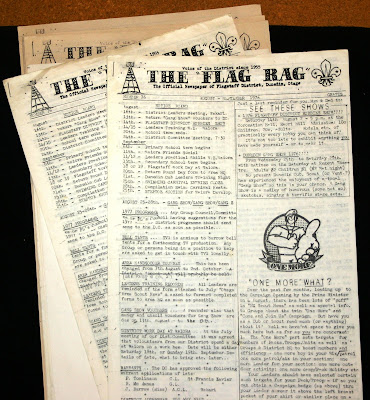 Image from MS-3486/017
Visitors are welcome to come in and view the scouting material, or you can look through our listings on ‘Hakena’ at http://hakena.otago.ac.nz/nreq/Welcome.html

This entry was posted in Acquisitions, Historical photographs by Anna Blackman. Bookmark the permalink.