These images show the intersection of Crawford and Police streets, Dunedin, with the Otago Harbour and Andersons Bay beyond. 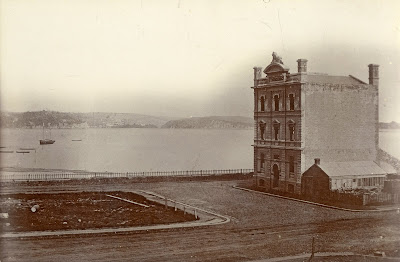 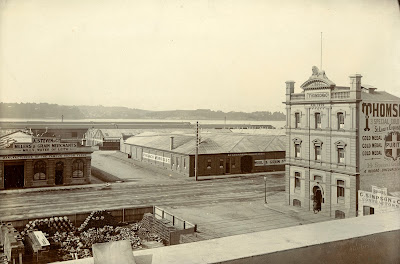 The first photograph was taken not long after 1876, when the three-storyed building on the corner was built for the well-known cordial and fizzy drink manufacturers Thomson & Company. This impressive building was designed by local architects Mason & Wales, and it even featured a lion lounging on top of the pediment. Crawford Street follows the waterline from the left to the right of the image.

Extensive reclamation carried out from 1879 is very apparent in the second photograph, which was taken c.1905-1910. Thomson’s premises still dominate and a large sign on the side of the building boasts of the company’s awards at the St Louis World’s Fair of 1904. The small building next door appears to be the same one visible in the earlier image. It has a new facade and is occupied by the builder George Simpson. The building at the far left was built in 1897 for the auctioneers Maclean & Co. Here it seen as the premises of A. Steven & Co., ‘manufacturers of the famous Victor flour’, who took over the building in 1902. At the centre is the large wool and grain store built in 1892 for Stronach Morris & Co. Behind this is the store of the National Mortgage and Agency Company (NMA), and further back some long railway sheds can be seen.

None of the buildings or businesses visible in these photographs survives. The site of Thomson’s building is now occupied by Brown’s Avanti Plus cycle shop.

The original photographs are in the papers of J.T. Paul, MS-0982/597. They are on identical mounts from Exchange Court Studios, Dunedin.

This entry was posted in Historical photographs by Anna Blackman. Bookmark the permalink.