The study protocol for an observational study examining the safety a novel chest pain pathway that uses point-of-care troponin.

Chest pain pathway’s are used throughout the country but largely rely on laboratory based troponin assays, which are not available for a considerable proportion of the rural population.[1] This will be the first large study that examines a rural and/or primary care population.

Enrolment has been more difficult (and slower) than anticipated, but in more than 300 low risk patients (and preliminary analysis), there have been no missed Major Adverse Cardiac Events in the first 30 days after presentation. This is in line with other chest pain pathways that use the new high-sensitivity assays. 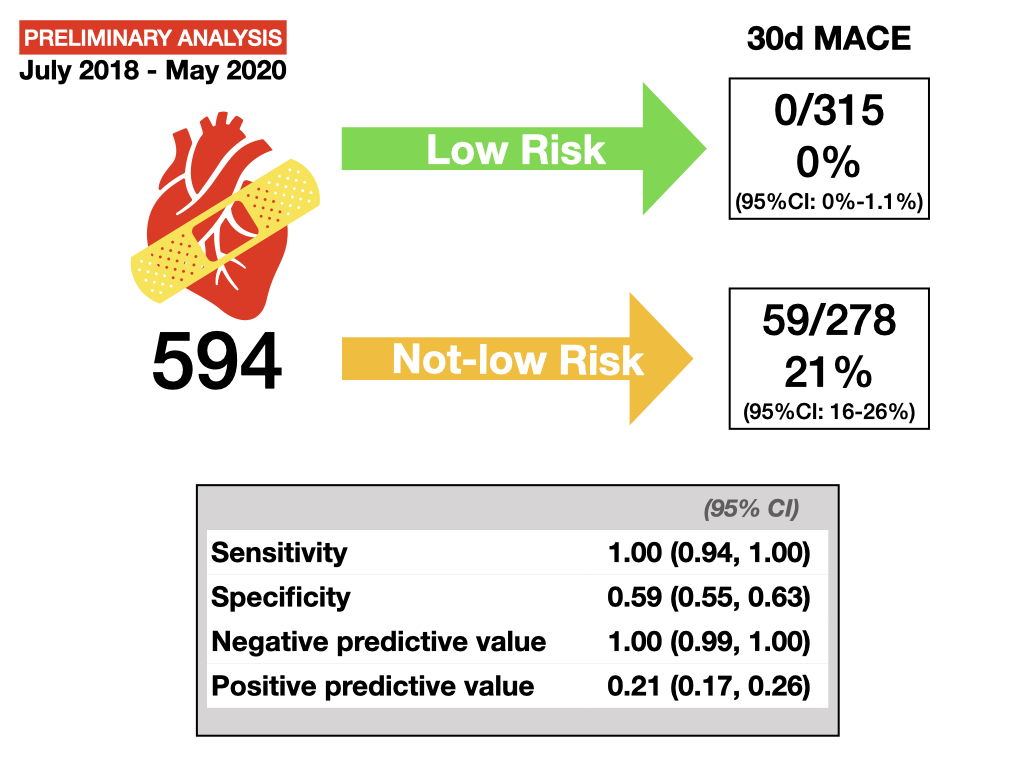 If you have access to point-of-care troponin and aren’t involved as a study site then please get in touch with me, and if you are already contributing – thank you!! and think of entering patients with chest pain into the data collection tool!

Second troponin paper for the day:

A first look at a new POC assay from Abbott by a group well known for their work in chest pain assessment. This preliminary study performed in Christchurch ED (urban population) shows a single test (used in a laboratory) on presentation (that takes 15minutes to run) effectively excludes Type 1 myocardial infarction in low-risk patients – with the same Sens/NPV as a laboratory based . Need to wait to see real world performance but promising for rural GP and hospitals reliant on point-of-care troponin when assessing chest pain. Not calling it high-sens yet… Semantics

Large trial that showed no difference in patient outcomes (mortality, major adverse cardiac events) despite an increase in the number of patients re-classified as having NSTEMI with the high-sens assay compared to a contemporary troponin assay. These patients were older and female (a lower cutoff is used in the high-sens but not the contemporary assay for females).

These Scottish hospitals used the troponin in a different way to that used in most NZ urban hospitals, where there is an accelerated chest pain pathway, which limits external validity. The sites tested at 0hrs and 6–12hrs.

Some NZ rural hospitals use high-sens troponin but most use a point-of-care assay. Few if any use a contemporary troponin, but this is still being reported in community laboratories. It is unclear what this means for those using the point-of-care test.

I think that it is becoming clear that the value of the high-sensitivity troponin assay is in allowing an earlier, rather than a better risk assessment.

deeper analysis at The Bottom Line

Background High-sensitivity cardiac troponin assays permit use of lower thresholds for the diagnosis of myocardial infarction, but whether this improves clinical outcomes is unknown. We aimed to determine whether the introduction of a high-sensitivity cardiac troponin I (hs-cTnI) assay with a sex-specific 99th centile diagnostic threshold would reduce subsequent myocardial infarction or cardiovascular death in patients with suspected acute coronary syndrome.

Methods In this stepped-wedge, cluster-randomised controlled trial across ten secondary or tertiary care hospitals in Scotland, we evaluated the implementation of an hs-cTnI assay in consecutive patients who had been admitted to the hospitals’ emergency departments with suspected acute coronary syndrome. Patients were eligible for inclusion if they presented with suspected acute coronary syndrome and had paired cardiac troponin measurements from the standard care and trial assays. During a validation phase of 6–12 months, results from the hs-cTnI assay were concealed from the attending clinician, and a contemporary cardiac troponin I (cTnI) assay was used to guide care. Hospitals were randomly allocated to early (n=5 hospitals) or late (n=5 hospitals) implementation, in which the high- sensitivity assay and sex-specific 99th centile diagnostic threshold was introduced immediately after the 6-month validation phase or was deferred for a further 6 months. Patients reclassified by the high-sensitivity assay were defined as those with an increased hs-cTnI concentration in whom cTnI concentrations were below the diagnostic threshold on the contemporary assay. The primary outcome was subsequent myocardial infarction or death from cardiovascular causes at 1 year after initial presentation. Outcomes were compared in patients reclassified by the high-sensitivity assay before and after its implementation by use of an adjusted generalised linear mixed model. This trial is registered with ClinicalTrials.gov, number NCT01852123.

Findings Between June 10, 2013, and March 3, 2016, we enrolled 48282 consecutive patients (61 [SD 17] years, 47% women) of whom 10360 (21%) patients had cTnI concentrations greater than those of the 99th centile of the normal range of values, who were identified by the contemporary assay or the high-sensitivity assay. The high- sensitivity assay reclassified 1771 (17%) of 10 360 patients with myocardial injury or infarction who were not identified by the contemporary assay. In those reclassified, subsequent myocardial infarction or cardiovascular death within 1 year occurred in 105 (15%) of 720 patients in the validation phase and 131 (12%) of 1051 patients in the implementation phase (adjusted odds ratio for implementation vs validation phase 1·10, 95% CI 0·75 to 1·61; p=0·620).

Interpretation Use of a high-sensitivity assay prompted reclassification of 1771 (17%) of 10 360 patients with myocardial injury or infarction, but was not associated with a lower subsequent incidence of myocardial infarction or cardiovascular death at 1 year. Our findings question whether the diagnostic threshold for myocardial infarction should be based on the 99th centile derived from a normal reference population.