This paper review was found lost in my flawless organisational system. Apologies to Matilda(!) who provided the commentary.

Symptomatic patients with their first episode or recurrence of AF often present to hospital. Traditionally cardioversion has been carried out early, either chemically or electrically. However, it is known that many of these patients will spontaneously cardiovert within a 48 hour window. The authors of this Danish study sought to determine if delaying cardioversion, to that 48 hour mark, was non-inferior to early cardioversion when measuring rates of sinus rhythm at 4 week and in doing so avoiding many unnecessary medical interventions.

This was a multi-centre, randomized, open-label, non-inferiority study carried out across 15 urban hospitals in the Netherlands. Eligible patients were aged over 18, presenting with symptomatic, hemodynamically stable AF of less than 36 hours duration. This could be the first or a recurrent episode of AF. Patients who met inclusion criteria were randomly assigned to a ‘wait-and-see’ approach with delayed cardioversion at 48 hours, or early cardioversion during the initial admission. The primary end-point was sinus rhythm at 4 weeks. Secondary endpoints included cardiovascular events (CVA, TIA, ACS), ED presentations and time of index visit.

Patients in the ‘delayed’ group were administered rate control medication (mostly beta blockers) and discharged home once deemed stable. They were then reviewed as close as possible to 48 hours after symptoms onset. If at that point they were still in AF cardioversion took place. Anti-coagulation was continued in patients already on it and initiated in those with a CHADsVASC of 2.

At 4 weeks 91% of the delayed group were in sinus, and 94% of the early cardioversion group. This met statistical criteria for non-inferiority. Cardiovascular complications were similar between the two groups. Of note the study was not powered to assess safety.

This study adds weight to the ‘wait-and-see’ approach to AF. It is particularly relevant to Rural Hospital practice as it is often impractical and unsafe to cardiovert patients due to staffing, resourcing and clinician experience, especially after hours. It does provide for more ‘wiggle’ room and potentially avoid unnecessary intervention. The counter argument is that you are encroaching in to the time that risk of an embolic event begins to rise. Guidelines have previously been that risk of an embolic CVA significantly increase after 48 hours from AF onset. However, there is growing concern this time window may be too generous, with embolic risks starting to increase at as little as 12 hours after onset.1

This trial also begs the question – what would happen if you waited 4 weeks before doing cardioversion in this cohort of stable patients?

At our recent inaugural Rural CME webinar Cardiologist, Dr Gerry Wilkins, advocated for the rate control +/- anti-coagulation with delayed or nil intervention approach. In his words:

“Calm down, give a decent oral dose of some rate slowing med, NOAC and discharge. In this era it is very rare I would consider immediate cardioversion.”

Matilda is a rural doctor in Taupō. She is the CME convener and the convener of GENA728 Cardiorespiratory medicine in rural hospitals.

In a multicenter, randomized, open-label, noninferiority trial, we randomly assigned patients with hemodynamically stable, recent-onset (<36 hours), symptomatic atrial fibrillation in the emergency department to be treated with a wait-and-see approach (delayed-cardioversion group) or early cardioversion. The wait-and-see approach involved initial treatment with rate-control medication only and delayed cardioversion if the atrial fibrillation did not resolve within 48 hours. The primary end point was the presence of sinus rhythm at 4 weeks. Noninferiority would be shown if the lower limit of the 95% confidence interval for the between-group difference in the primary end point in percentage points was more than −10.

In patients presenting to the emergency department with recent-onset, symptomatic atrial fibrillation, a wait-and-see approach was noninferior to early cardioversion in achieving a return to sinus rhythm at 4 weeks.

Recording of the inaugural webinar hosted by Dr. Matilda Hamilton. Gerry Wilkins, a cardiologist at Dunedin Hospital gives an update on Atrial Fibrillation. 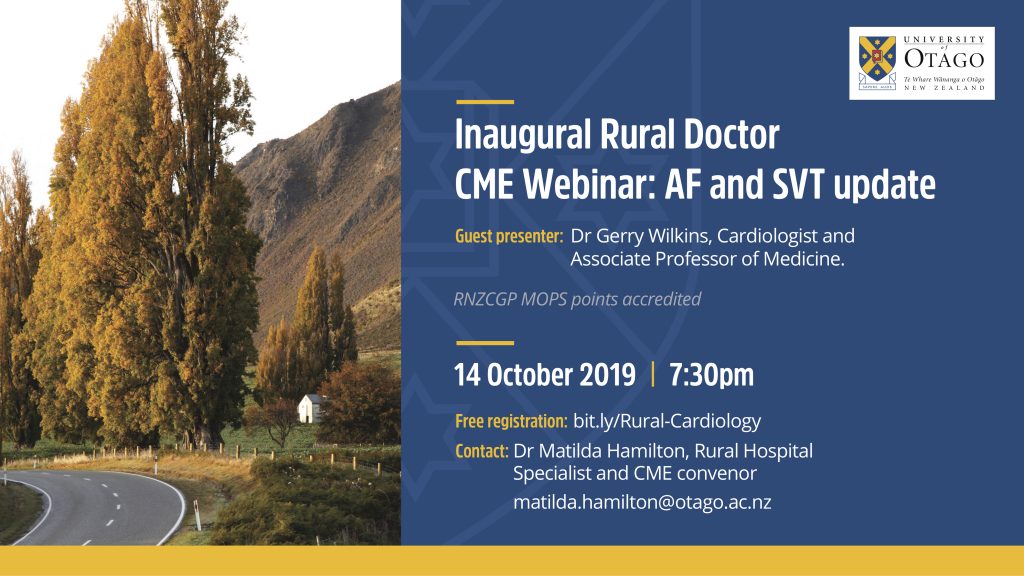 Webinar will be recorded and posted here for viewing when suits.

Some of you may have seen this before but recently heard about this trial published in JAMA last year. This was a RCT trial where patients with ACS and going on to have angiography were given a loading dose (80mg) of Atorvastatin or placebo i) NSTEMI – 2–12hrs prior to angiography/PCI or ii) STEMI – ASAP. This was reported as a negative trial with no reduction in 30 day major adverse cardiac events (MACE) in the ACS population. However, in post-hoc subgroup analysis (read what you will into this) the group that had a STEMI and received Atorvastatin had a >40% reduction in 30-day MACE. 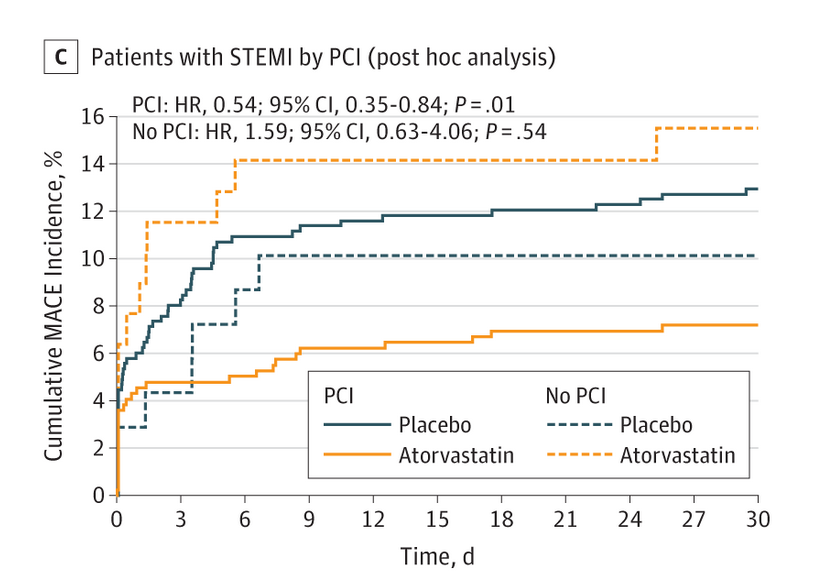 This is a therapy that they will end up on anyway and is unlikely to do harm if the definitive treatment is not delayed. 80mg of Atorvastatin could be given whilst drawing up the lytics!

Note these were patients that went onto have PCI (which would hopefully be the majority of STEMI in NZ now) and it is unclear if re-perfusion by any means (lysis v primary PCI) will yield the same results but it is a big effect size.

Design, Setting, and Participants Multicenter, double-blind, placebo-controlled, randomized clinical trial conducted at 53 sites in Brazil among 4191 patients with ACS evaluated with coronary angiography to proceed with a percutaneous coronary intervention (PCI) if anatomically feasible. Enrollment occurred between April 18, 2012, and October 6, 2017. Final follow-up for 30-day outcomes was on November 6, 2017.

Main Outcomes and Measures The primary outcome was MACE, defined as a composite of all-cause mortality, myocardial infarction, stroke, and unplanned coronary revascularization through 30 days.

Second troponin paper for the day:

A first look at a new POC assay from Abbott by a group well known for their work in chest pain assessment. This preliminary study performed in Christchurch ED (urban population) shows a single test (used in a laboratory) on presentation (that takes 15minutes to run) effectively excludes Type 1 myocardial infarction in low-risk patients – with the same Sens/NPV as a laboratory based . Need to wait to see real world performance but promising for rural GP and hospitals reliant on point-of-care troponin when assessing chest pain. Not calling it high-sens yet… Semantics