This blog comments on the Ernst and Young (EY) report to the Ministry of Health, which evaluated tobacco excise tax increases as a strategy for achieving the Government’s Smokefree 2025 goal [1]. The report’s recommendations, including continuing annual tax excise increases (conditional on positive impacts demonstrated in enhanced monitoring) and implementing comprehensive and multi-faceted complementary measures, are highly consistent with those made in the NZ tobacco control sector’s Achieving Smokefree Aotearoa Plan (ASAP) launched a year previously [2]. The report strengthens the overwhelming case for implementing a Government-led, comprehensive strategy to achieve the Smokefree 2025 goal equitably for all peoples in Aotearoa.

When the Labour/New Zealand (NZ) First/Green Government formed in October 2017, there were high hopes that the new Government would place a high priority on improving and safeguarding the public health, including progressing key public health initiatives such as the Smokefree Aotearoa 2025 goal.

Initially, progress was slow. Indeed, the Associate Minister of Health Jennie Salesa’s first tobacco control-related initiative was to commission an investigation by EY into the impact of annual above inflation tobacco excise increases introduced in 2010. Media reports suggested the investigation was a political response to reports that excise tax increases might be adversely affecting disadvantaged communities, including Māori and Pacific smokers and their whanāu, and increasing cigarette-related robberies from dairies. The Minister was quoted as being undecided whether she should maintain the scheduled increases to 2020 or institute a new excise tax regime beyond that date.

The new EY Report describes a multifaceted investigation of: (i) the impact (positive and negative) of previous changes in tobacco taxation on smokers and their families, and likely impacts of future increases; (ii) the impact of tobacco excise increases on illicit trade and robberies; and (iii) industry responses to tobacco excise increases, including efforts to reduce their impact. It comprised a review of NZ and international literature; an analysis of secondary data that explored the impact of tobacco excise increases and estimated new elasticities for tobacco price with smoking prevalence using integrated data infrastructure (IDI) and household economic survey data; key informant interviews with policy-makers, academics and health professionals; a representative population survey recruited from an online panel; and community focus groups of mainly smokers and ex-smokers of varying ages with strong Māori and Pacific representation that explored their attitudes and beliefs towards tobacco tax increases. 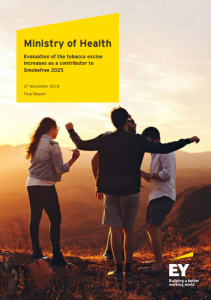 So what does the report find and conclude?

In relation to impact of tobacco tax increases on smoking, the report concludes: “There is strong evidence both international and from within New Zealand that demonstrates changes in consumer behaviour as a result of the tax increases –reducing uptake, cutting down consumption and increasing quit attempts…” and the authors asserted: ”The weight of evidence shows that increasing the price of tobacco continues to the single most effective tool for reducing tobacco use.” New demand (-0.5) and prevalence (-0.34) price elasticity estimates are calculated. The report does not find that the impact of tobacco tax increases on reducing smoking has decreased recently (or at least up to the last data point, 2016). These findings are broadly in line with Treasury assumptions and previous NZ [3] and international [4] estimates, and apply to the general population of smokers as assessment of differential impact by age, ethnicity or socio-economic status was not possible.

The population survey and community focus groups found evidence that high tobacco prices imposed adverse financial impacts on some smokers. For example, some focus group participants reported purchasing cheaper food or less petrol in order to buy tobacco products. Others reported switching to budget brands or to roll-your-own tobacco to reduce costs. These findings align with those of previous quantitative and qualitative studies [5, 6].

The authors note it is difficult to assess adverse impacts, because of the lack of high quality trend and current data. For example, they describe increasing media reports of retail robberies involving cigarettes, and growing retailer concerns. However, they also note that lack of reliable longitudinal data on tobacco-related crimes makes it impossible to assess whether such robberies are actually increasing, and, if so, whether any observed increases are due to higher tobacco excise taxes, points we have made previously. Similarly, there are few data on trends in imported or crime-related illicit tobacco supply, making it difficult for the Report authors to verify or disprove claims that these are increasing.

The Report notes that, as observed in other jurisdictions, NZ-based tobacco companies have tried to minimise the impact of tax increases on smoking prevalence and tobacco consumption. For example, the companies have introduced budget brands, differential pricing and ‘undershifting’ [7]. The latter occurs when tobacco excise-related price increases are applied differentially by the tobacco companies, with greater price increases for premium brands and smaller increases for budget brands. These tactics enable smokers to minimise the financial impacts of excise taxes, hence reducing the stimulus to quit and facilitating continued smoking.

In summing up, the EY Report authors are unequivocal: “The weight of the evidence is that excise tax increases are an essential part of a package of interventions needed to reduce tobacco consumption and daily smoking prevalence”. The Report recommends that the Government continue tobacco excise increases to and beyond 2020, provided they are accompanied by enhanced monitoring, including use of community intelligence and research into how effective sustained increases are and what adverse effects arise. In addition, the authors recommend complementary measures such providing access to a comprehensive range of cessation support services and targeted messaging to promote quitting among smokers in high prevalence and disadvantaged communities, and a minimum price to reduce the impact of industry efforts to undermine the excise increases.

The Report also recommends greater hypothecation (linking) of tax revenue to fund complementary tobacco control measures. There is a strong social justice and equity case for hypothecation i.e. since tobacco excise taxes can impose a financial burden on disadvantaged smokers who don’t quit or cut down, the revenue gathered should be used to fund measures that help those smokers quit and remain smokefree. This recommendation aligns with evidence that NZ smokers find tobacco excise increases much more acceptable if additional revenue is used to support smokers to quit or prevent young people from starting (ITC data [11]).

Although the Report focusses on excise tax, the recommendations also address the need for a wider strategy to achieve the Smokefree 2025 goal. There is growing consensus based on survey data (e.g. from the NZ Health Survey) and modelling studies [8, 9] that SF2025 will not be achieved by business-as-usual approaches. Tobacco control activity in NZ is mainly focused on providing cessation services, but there is strong evidence that this emphasis will not achieve the Smokefree Aotearoa goal, particularly for Māori [10].

Thus, the Report recommends introducing complementary measures to encourage and support smokers to quit, and reduce initiation among adolescents and young adults. These include: exploring interventions to reduce the nicotine content of smoked tobacco products; banning additives and innovations that make these products more addictive or appealing; reducing the availability of smoked tobacco products through restrictions on retail supply and increasing the legal age of purchase; enhanced smokefree messaging and public education; and supporting smokers to adopt harm reduction approaches, including transitioning fully to reduced risk products such as e-cigarettes. The Report notes that the latter should be balanced by introducing minimum standards for quality, safety and availability of these vaping products to minimise any potential adverse effects.

In 2017, the NZ tobacco control sector developed a strategy (Achieving a Smokefree Aotearoa 2025 – ASAP). The measures recommended in the EY Report have striking parallels with the ASAP plan recommendations (see table). Evidence that two different reviews, conducted by two different groups, have proposed near-identical strategies suggests the Government have been gifted a plan for realising the Smokefree 2025 goal, and need only adopt the EY or ASAP recommendations rather than invest in a further strategy development process. 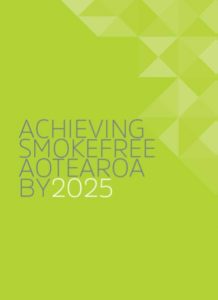 In conclusion, the EY Report recognises that tobacco excise taxes have played a crucial role in reducing smoking prevalence within NZ and internationally. Given this evidence, the authors conclude it would be an error to abandon what is arguably the most effective single intervention that could help achieve the Smokefree 2025 goal but at the same time recognise that ongoing review of tobacco excise increases, informed by closer monitoring of on-going benefits and harms, is crucial.

While focussing on this key strategy, the Report reiterates the need for a comprehensive and multi-faceted action plan to support quitting and reduce uptake among Māori, Pacific and low-income peoples, the groups bearing the greatest burden of harm from tobacco. Smokefree advocacy groups, NGOs, academics and, now, private sector consultants concur that current interventions should continue and intensify. They also agree that new measures, such as increasing the availability of harm reduction products (with appropriate regulatory controls to maximise their positive impact and minimise risks), reducing tobacco supply, and decreasing tobacco products’ appeal and addictiveness will be necessary to catalyse progress to 2025.

Having now received similar recommendations arrived at independently by EY and the NZ tobacco control sector, the challenge is no longer to determine what needs to be done, but rather for NZ decision-makers to adopt such recommendations in an official plan and start implementing the required policies and interventions.

Statement of  non-competing interests:    None of the authors have conflicts of interest to declare. None of the authors of this blog were participants in the stakeholder interviews conducted for the EY Report, nor involved in any way in preparing the Report.

This entry was posted in Uncategorized and tagged Smokefree Aotearoa 2025, tobacco, tobacco tax by tedla55p. Bookmark the permalink.