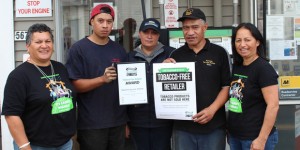 Two recent articles by Aspire2025 researchers have explored how tobacco sales in New Zealand could be more effectively regulated. The first examines licensing models that have been implemented overseas, while the second explores how provisions from the Psychoactive Substances Act 2013 could inform tobacco supply policies (both published in the NZ Medical Journal, 1 April 2016). This blog overviews the findings in both articles and explains how stronger tobacco supply policies would contribute to the Government’s smokefree 2025 goal.

It may come as a surprise that a product as deadly and addictive as tobacco, which causes death on a scale unprecedented for a consumer product, can be sold anywhere in New Zealand and by anyone. Currently, tobacco is available at up to 8,000 retail outlets (1) throughout NZ, though nobody actually knows the exact number. Selling tobacco alongside everyday products such as milk and bread, and in stores often visited by children, is not consistent with the Government’s goal of “reducing smoking prevalence and tobacco availability to minimal levels” by 2025 (2).

Why should we reduce the number of tobacco outlets?  Firstly, ease and convenience of access affects consumption. By decreasing the physical availability of a drug, we increase its ‘full cost’, or the time and effort required to obtain it, thus encouraging quitting and reduced consumption (3).

Lastly, smokers who are trying to quit find the process more difficult if they are frequently exposed to tobacco products or outlets (6-10). To reduce smoking to less than 5% amongst all population groups by 2025, nearly half a million smokers need support to quit smoking. Many of these people live in deprived neighbourhoods (NZDep2013 quintiles 4 and 5) (11), where there is a greater density of tobacco retail outlets (12). Tobacco retail policies thus need to protect children and prevent smoking initiation, but also need to help quitters to stay quit.

An effective way of bringing about this change is to require all businesses that sell tobacco to be licensed. In its simplest form, licensing means retailers would need to notify government authorities that they are selling tobacco, but they would neither need to seek permission nor prove their suitability to sell this product. New South Wales (Australia), Scotland, Ireland, Fiji, New York state, and several Canadian Provinces have schemes similar to this idea. This approach provides accurate information on who sells tobacco, enables enforcement officers to do their work more efficiently, and helps improve retailer compliance with tobacco laws (13).

An alternative system would require retailers wanting to sell tobacco to apply for a licence, which would only be granted if they met specific conditions and paid a fee. These systems exist in several Australian states, Singapore, Finland and jurisdictions throughout New York and California. The benefits of this type of scheme are multiple: revenue raised through fees can be used to fund enforcement, the licence can be revoked if retailers fail to comply with licence conditions (potentially a stronger deterrent than a fine alone), and governments are able to limit the number, type and location of outlets selling tobacco.

As an example, the tobacco retailer licensing scheme in Huntington Park, California, disallows any new retailers from selling tobacco if they are located in residential zones; within 500 feet of “youth-populated areas” (schools, childcare centres, playgrounds etc), or within 200 feet of another tobacco retailer (14). Similarly, in San Francisco, the new Tobacco Sales Reduction Act limits tobacco retailing permits to 45 for each of the 11 city districts. This measure is expected to reduce tobacco outlet numbers by over 50% during the next 10-15 years (15).

The NZ Government could demonstrate a serious commitment to its 2025 smokefree goal by taking inspiration from Hungary. In 2013, Hungary mandated that tobacco could only be sold at a limited number of licensed outlets, which the law reduced from 42,000 to 7,000 (16).

The Government could also look to its recent Psychoactive Substances Act of 2013, which required retailers of ‘legal highs’ to hold a licence, and disallowed sales of psychoactive substances in dairies, convenience stores, petrol stations, or any store where alcohol is sold. This legislation reduced the number of shops selling these products from over 3,000 to just 156 specialty outlets (17, 18) (see also this PHE blog – though sales were subsequently stopped completely after a further amendment to the law). If the Government can make such a significant change to the retail landscape for psychoactive substances, why can it not follow suit for tobacco?  After all, fewer people consumed “legal highs” and the population health effects are orders of magnitude less that those due to tobacco.

Public support for regulating tobacco retailing, including licensing and reducing the number of places that sell tobacco, is high (19). Further, evidence from South Australia (20), California (21), and Finland (9), suggests that licensing leads to a decrease in the number of tobacco retail outlets. NZ modelling work (22) suggests that drastically reducing the number of tobacco outlets in NZ could help reduce smoking prevalence over the long-term, though further work is required to test the assumptions underpinning such research.

* Researchers all based at the University of Otago – in Wellington (RE) or in Dunedin (all the other authors).

This entry was posted in Uncategorized and tagged Psychoactive Substances Act 2013, tobacco, tobacco outlets by Kate Sloane. Bookmark the permalink.