This blog summarises findings from people who smoke or have recently quit smoking and who participated in the ITC New Zealand project from 2016-2021. The blog documents attitudes towards smoking and quitting, support for, and perceived impacts of, key measures included in the Smokefree 2025 Action Plan Discussion Document, and data on use of illicit tobacco products. 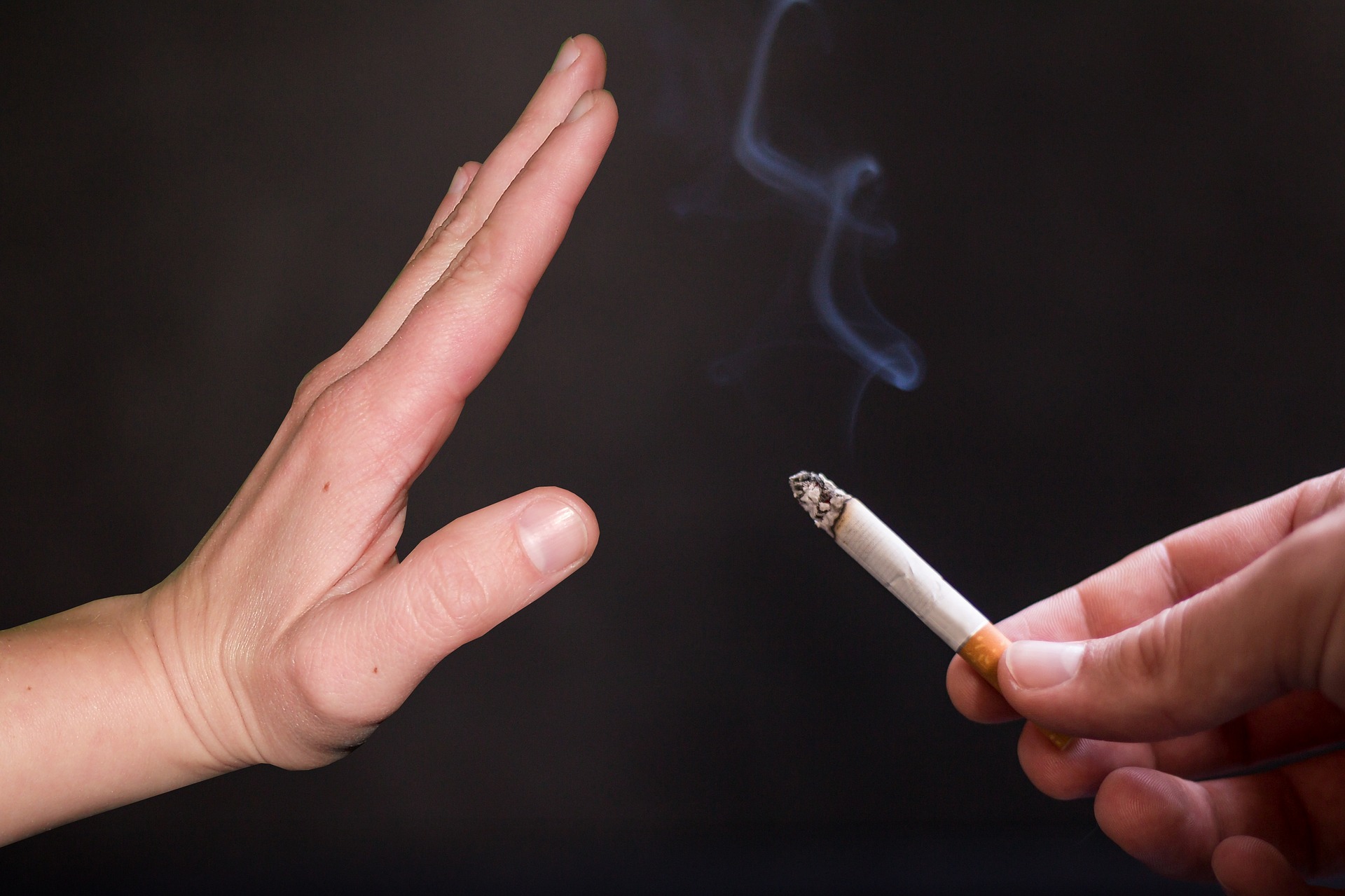 The NZ Government recently published a Discussion Document setting out a bold and comprehensive action plan for how the Smokefree 2025 goal could be achieved. Key measures proposed in the plan include:

The public and stakeholders have been invited to comment on the proposals. Submissions have now closed, but there is ongoing debate about the merits of the approach and specific proposed measures included in the action plan.

The ITC New Zealand study (referred to internationally as ITC NZ and in NZ as EASE) is part of a 29-country international collaboration that surveys people who smoke or who have recently quit every 12-18 months. The New Zealand study includes around 1000-1200 participants (of whom a third or more are Māori) surveyed in August 2016 to April 2017 (wave 1 [W1], 1155 participants), June to December 2018 (wave 2 [W2], 1010 participants) and October 2020-February 2021 (wave 3 [W3], 1266 participants). Data collection for the first two waves used Computer Assisted Telephone Interviews (CATI) whilst the wave 3 survey was completed online.

We present findings from the first two waves (emphasising W2 where available) and some preliminary analysis from W3. Further details of the methods are available in technical reports here.1 2

Regret, perceived addiction and quitting among people who smoke

Some critics argue that smokefree policy interventions are overly controlling, intrusive and paternalistic.3 According to this reasoning, many adults who smoke enjoy smoking and make an informed choice to continue to smoke. As a result, they assert that people who smoke should be left to make their own decisions about quitting, and smokefree policy measures should not restrict their autonomy by using policies to make smoking less appealing, available, addictive, or affordable.

Our findings challenge these arguments. For example, among people who smoke in the ITC NZ surveys the vast majority (82% W2) report regretting starting to smoke, and contrary to the notion that people continue to smoke as a free and informed choice, virtually all believe that smoking is addictive (99% agree W2) and agree that they personally are addicted (93% agree W2). People who smoke are not content with their ‘choice’; almost three quarters (71% W2) reported they were planning to quit, with over a third (36% W2) intending to quit in the next six months. Furthermore, the vast majority (84% W2) had tried to quit previously, almost half (46% W2) in the last year. These findings were similar between Māori and non-Māori participants (e.g. 45% Māori vs 52% non-Māori had tried to quit in last year, 34% Māori and 37% non-Māori were planning to quit in the next six months). Therefore, strong, effective smokefree policies will support people who smoke to escape addiction, regain autonomy and achieve their quitting goals.

Support for key measures included in the Smokefree Action Plan

Findings from the ITC NZ study show that people who smoke mostly agree with the measures in the proposed Action Plan. The figure below summarises the recent data on levels of support among people who smoke and recent quitters for key measures included in the Smokefree 2025 Action Plan Discussion Document. Full results from this analysis are included in a table in an appendix to this blog.

A large majority (70-93%) supported most of the measures, except for substantially reducing the number of retail outlets selling tobacco products (36% support). Support was mostly similar among Māori, Pacific and non-Māori, non-Pacific participants, and was slightly higher among recent quitters, substantially so for reducing the number of retail outlets (58% support recent quitters vs 31% smokers).

There was particularly strong support for reducing the nicotine content of cigarettes and tobacco (76%) and for measures that focus mainly on reducing smoking uptake among young people – including for a smokefree generation (78% support) and for increased mass media campaigns to discourage smoking initiation (93% support). These estimates align with another key finding in the wave 1 surveys in which 60% of people who smoke (69% of Māori) agreed that they worried: “that your smoking will influence the children around you to start or continue.”

Previous studies have found even higher level of support for many smokefree policy measures among the public as a whole and among non-smokers.4 5

More detailed information on support for the smokefree goal and smokefree measures in W1 and W2 surveys are available here.6 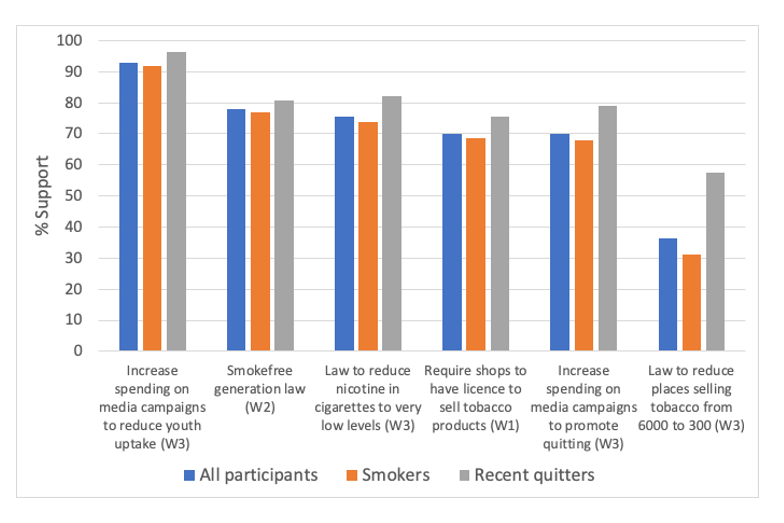 Evidence from the ITC NZ survey suggests that reducing the nicotine content of tobacco and decreasing the number of tobacco retailers is likely to have a significant impact in reducing smoking prevalence.

Questions developed for the Te Ara Auahi Kore (TAKe) survey asking people who smoke what they thought they would do if particular measures were implemented were included in W3 ITC NZ surveys (results for Māori participants from the TAKe survey are in preparation).

Overall, almost half of the participants who smoked thought that these two measures would prompt them to quit smoking, switch to vaping, or reduce how much they smoked.

The Action Plan proposes banning filters from smoked tobacco products. Two main reasons support this intervention: first, it will protect the environment since most butts are discarded when smokers smoke outdoors in public places7 and cigarette butts were the most frequently identified litter item in a recent NZ National Litter Audit. As well as despoiling the environment, butts cause environmental damage as they contain numerous contaminants that can leach into the surroundings and are very poorly biodegradable. Second, filters may make cigarettes more appealing by fostering the false belief that filtered cigarettes are substantially less harmful than unfiltered cigarettes and by enabling innovations that appeal particularly to young people such as crushable flavour capsules.8 Smoking-related harms have not appreciably changed since the almost universal adoption of filters on cigarettes9 and there is evidence that ventilated filters may promote deeper inhalation and increase the occurrence of some lung cancers.10

We tested understanding of the impact of filters in wave 2 of the ITC NZ by asking whether participants believed that filters reduce the harmfulness of cigarettes. Among people who currently smoked, only around half (51%) thought this statement was false, with a third (34%) believing it was true and 14% feeling unsure. This suggests that prohibiting filters may reduce the appeal of smoking and help reduce uptake and support quitting by eliminating the risk that people who smoke filtered cigarettes underestimate their harmfulness.

Extent of the use of illicit cigarettes and tobacco

The most frequent criticism of the Action Plan Discussion Document in early reports, since repeated, were that the Action Plan measures would result in a dramatic increase in illicit trade. Critics also commonly assert that the illicit market is already very substantial (over 10% of the total), and rapidly increasing. However, these estimates are based on research carried out by the tobacco industry and have attracted methodological criticisms.11

The ITC NZ survey asked participants who smoked where they had bought their last cigarette pack or tobacco pouch. Whilst most participants had last bought cigarettes or tobacco from dairies, supermarkets, gas stations or convenience stores; two of the response options (‘from someone else (not at a store, shop or other mainstream establishment) selling cigarettes independently and/or illegally, perhaps at local markets, door-to-door, or just in the street’ or ‘from a friend or relative’) were likely to include a substantial proportion of illicit tobacco purchases.

In the most recent W3 survey the proportion who stated that either of these sources were where they bought their last cigarette or tobacco purchase was 1.1%, with some differences by ethnicity (Māori 1.3%, Pacific 2.3% and non-Māori non-Pacific 0.8%). However, 14.3% reported that within the last 6 months they had ever bought cigarettes or tobacco that had ‘been smuggled, lacked proper health warning labels, or did not have all government taxes paid’.

Our findings suggest that, whilst around one in seven of people who smoke make occasional purchases of products likely to be illicit, the overall market share of illicit products based on last pack purchased is very low. As explained elsewhere, if the final Action Plan is implemented in full, demand for tobacco products and hence the size of the illicit market should dramatically reduce as people who smoke quit. Furthermore, licensing of retailers selling tobacco products allied with robust enforcement that includes loss of licences for selling black market products will further constrain illicit trade. However, enhanced monitoring of illicit product use and strengthened border surveillance and enforcement should also be implemented as the Action Plan Discussion Document proposes.

In summary, findings from the ITC NZ/EASE study suggest that most people who smoke regret starting to smoke, acknowledge they are addicted, and report they are actively trying to quit. There is substantial support among people who smoke and recent quitters for many of the measures included in the Action Plan Discussion Document, with particularly strong support for two approaches: making cigarettes less addictive by removing the nicotine and for measures protecting young people from starting to smoke. Around a quarter of people who smoke thought that they would quit smoking or switch to vaping in the event that two of the key interventions were implemented. The data suggest that tobacco industry estimates of the extent of the illicit cigarette and tobacco market are over-stated.

Overall, these findings strongly support the approach set out in the Action Plan Discussion Document for Smokefree 2025. They suggest that the Action Plan measures, if implemented, will attract widespread support, and greatly reduce smoking prevalence and the harms and unacceptable disparities in health caused by smoking particularly for indigenous and other minority (e.g. Pacific) population groups.

Additional information and commentary about the Action Plan Discussion Document is available on the ASPIRE 2025 webpage.

The ITC New Zealand/EASE study was supported by grants from the New Zealand Health Research Council (HRC 15/072). We acknowledge the support of the ITC team at the University of Waterloo including Geoffrey Fong, Nadia Martin, Susan Kaai, Janine Ouimet, Anne CK Quah and members of the ITC data management team. We thank: the interviewees who kindly contributed their time; the Ministry of Health NZ who provided access to the New Zealand Health Survey participants who had agreed to be contacted about further research; and the Research NZ team who carried out data collection.

One thought on “The Smokefree 2025 Action Plan: key findings from the ITC New Zealand (EASE) project”