In this blog we explore the first Covid-19 Omicron variant waves in Australia and Aotearoa New Zealand (NZ). We find that Australia’s first Omicron wave resulted in higher hospitalisation and ICU occupancy compared to NZ. However, when examining the Auckland region compared with the rest of NZ, Auckland’s experience of the first Omicron wave is more severe, with a higher hospitalisation rate. We recommend that the NZ Government does more to prepare for a possible second Omicron wave (as in Australia) and for future variants of concern. Priority areas are increasing vaccination coverage and improving mask use and indoor ventilation.

At the same time as the Aotearoa New Zealand (NZ) Government reduces and removes some of the public health measures established to protect New Zealanders from Covid-19, the country is still experiencing its worst nationwide Covid-19 outbreak. This outbreak is  almost entirely fuelled by the Omicron variant of Covid-19. When considering potential scenarios for the future of the Covid-19 pandemic (in particular Omicron) in NZ, one of our best examples to look at is Australia.

Australia first identified Omicron at its border just three days after it was first recognized in South Africa in late November 2021, with Australian community cases identified in early December 2021. Whereas for NZ, the first Omicron case at the border occurred in mid-December 2021, with community transmission first reported in mid-January 2022. What followed in both countries after the more highly transmissible Omicron variant spread into the community was a wave of cases on a substantially larger scale than previously experienced in either country during the pandemic. These waves of community cases have also resulted in high numbers of cases requiring hospitalisation and admission to Intensive Care Units (ICU) in both nations.

To compare Australia and NZ’s Covid-19 cases, we have used a 7-day average for Covid-19 cases and adjusted the values to rates per 100,000 population (figure 1). Figure 1 covers the period from July 2021 of the Covid-19 pandemic, and is likely a substantial underestimate of the true number of infections as a result of potential false negatives and underreporting of test results due to the increased reliance on individual RATs testing rather PCR at this stage in the pandemic. Australia’s first Omicron wave peaked in mid-January 2022. NZ as a whole generally lags almost two months behind Australia with its first Omicron peak occurring in March 2022. However, when we examine the Auckland region against the rest of NZ, we observe that Auckland experienced its peak in cases in early March 2022 (with the three DHBs peaking on 4 March). The rest of NZ in general lags behind by 1 to 4 weeks (peaking on 22 March overall, with most individual DHBs peaking from 8 to 31 March). Auckland’s peak is also substantially higher than either the rest of NZ or Australia on a per 100,000 population basis. The numbers in Auckland have now fallen to below 2,000 daily cases, and will most likely track downwards for a period. For the rest of NZ, reported cases have been averaging around ~11,000 daily cases, with regional variation in the timing of peaks, and with a slightly more drawn out pandemic wave than that experienced in Australia (although there are state & territory variations to the timing of peaks). What the data also show is that Australia is experiencing its second Omicron wave beginning early March 2022. For South Australia and Tasmania, the number of confirmed cases in the second Omicron wave is higher than the first wave of Omicron. 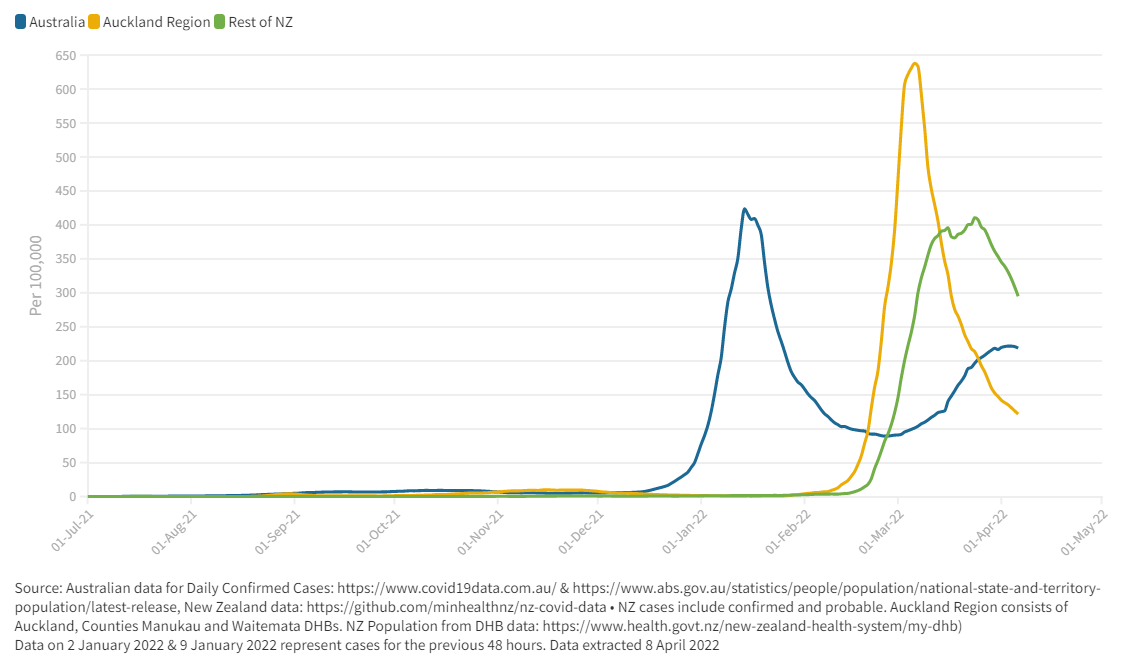 A second Omicron wave of hospitalisations starting from mid-March is also evident for Australia. Our previous estimates using Australian hospitalisation peaks, suggested that on a per capita basis, NZ could expect 1,107 hospitalisations at its peak. However, NZ overall reached a peak in hospitalisations of 1,016 on 22 March 2022, so slightly lower than anticipated in this hypothetical projection we made on 4 February 2022. 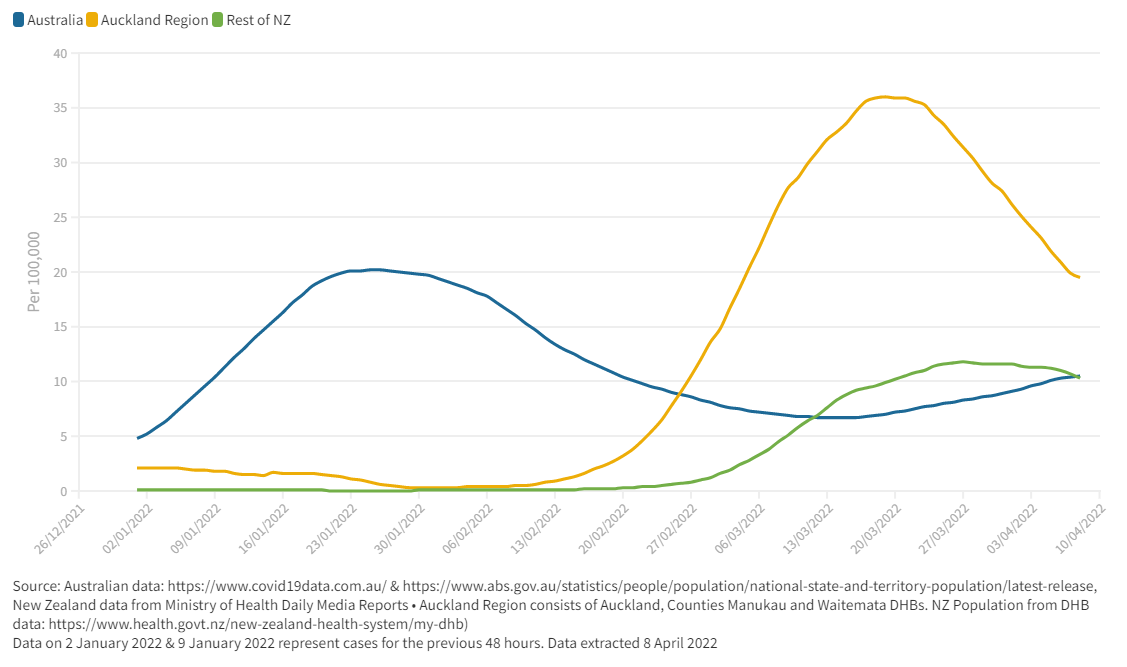 When we examine the ICU occupancy rates between Australia and NZ, it is clear that on a per capita basis, ICU admissions in Australia reached a higher peak than that in NZ (albeit with NZ ICU numbers staying relatively steady in the beginning of April 2022) (figure 3). For Australia, the peak in ICU occupancy occurred on 21 January with 424 ICU beds occupied, while in NZ, the highest occupancy occurred on 21 March with 33 ICU beds occupied. Our previous estimates using Australia’s peak in ICU occupancy suggested that if NZ experienced a per capita equivalent to Australia, NZ could have experienced a peak of 90 in ICU. Fortunately, this case load has not eventuated (to date). At Australia’s peak of Omicron, ~20% of the population had received a booster, while at NZ’s equivalent peak, ~50% of the population had received a booster (appendix figure 1). Given that the booster is known to reduce severe illness from Omicron infection, this factor may partially explain the generally lower hospitalisation and ICU numbers in NZ as a whole compared to Australia during the first Omicron waves. However, to be sure about this explanation, further investigation is needed. 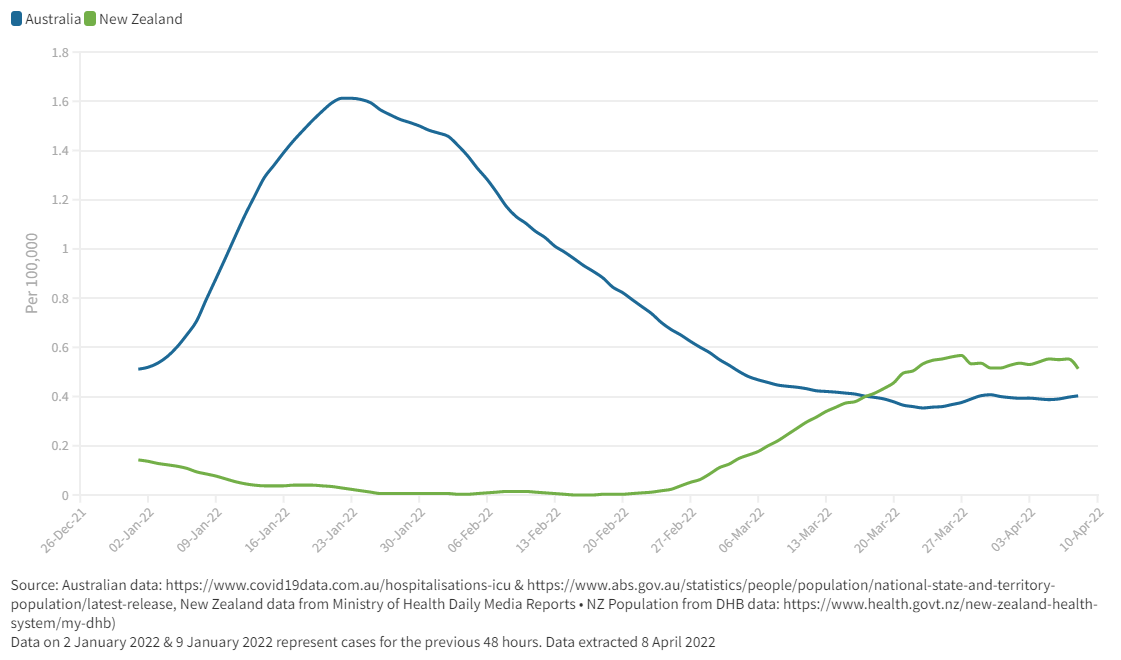 The previously circulating Delta variant in both nations has reduced to minimal levels (it may even be extinct in NZ), with Omicron (and it’s sub-lineages of BA.1 and BA.2) becoming dominant in 2022. For Australia, the first Omicron wave in early 2022 was largely dominated by the Omicron sub-lineage BA.1 (figure 4). However, the more transmissible Omicron sub-lineage of BA.2 has now become the dominant variant in Australia, with recent estimates from CovSpectrum suggesting ~100% of cases may be BA.2. Although at Australia’s peak, BA.1 represented ~93% of cases, ~2% BA.2, and the remainder being the dwindling Delta variant (appendix figure 2). NZ’s experience with the Omicron sub-lineages is somewhat different. The first Omicron peak of confirmed cases in all of NZ was on 7 March 2022 with nearly 24,000 cases. At this time, CovSpectrum suggests that BA.1 was estimated to be only ~20% and BA.2 at ~80%, with negligible Delta cases. By the end of March, BA.2 was even more dominant in NZ, estimated at ~88% prevalence.

Figure 4: Estimated Prevalence of Omicron sub-lineages in NZ and Australia from November 2021 onwards 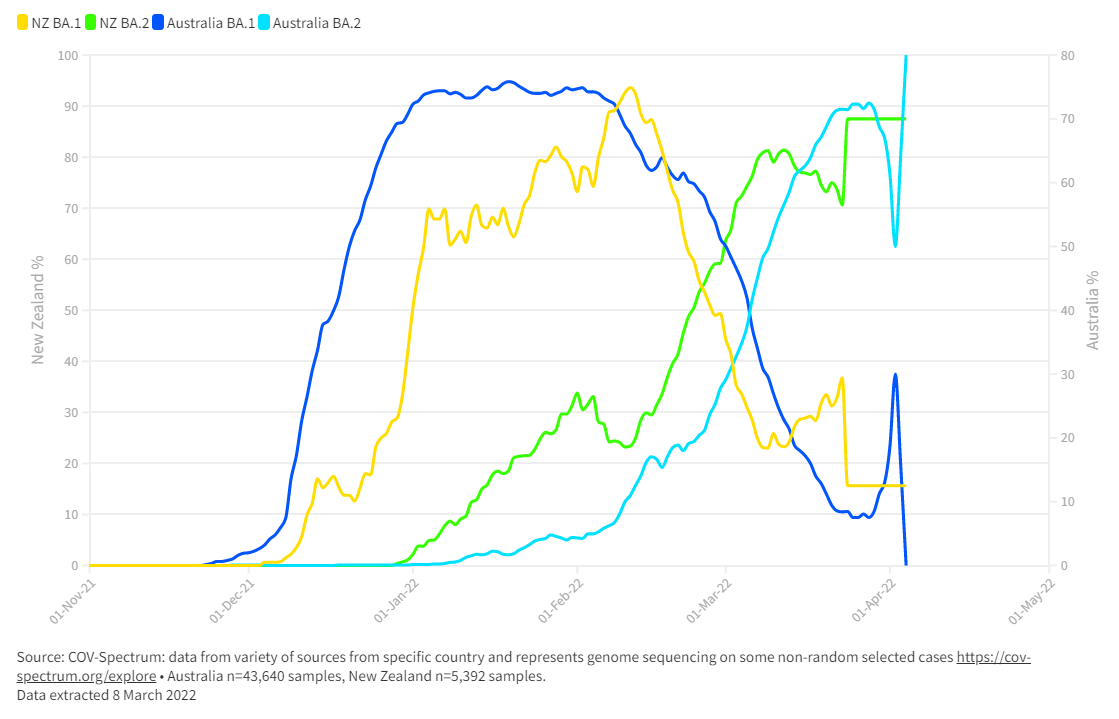 Second Omicron waves are being experienced in many other nations, such as the United Kingdom, Germany, and Italy, with BA.2 dominating the new wave of cases, just like the current situation in Australia. However, is not clear if the second Omicron waves being experienced internationally (including Australia) is a result of the growing BA.2 dominance, lessening of restrictions (along with increased social interactions) and/or waning immunity. Indeed, given that NZ ‘s first Omicron wave was a mix of both BA.1 and BA.2, the potential for a second wave, or perhaps one as severe as the first Omicron wave, may be somewhat reduced compared to these other countries.

In order to further reduce the impact from the current nationwide Covid-19 outbreak in NZ, and reduce the potential impact from a second Omicron wave (and subsequent waves), we suggest the following immediate steps for the NZ Government:

Collectively these actions will strengthen our response to any second Omicron wave (or future variants) and will help with ongoing control of Covid-19 at whatever lower level it plateaus out at.

* Author details:  All authors are with the Department of Public Health, University of Otago, Wellington.

Appendix Figure 1: Covid-19 Vaccination % Levels in 2022 in NZ and Australia 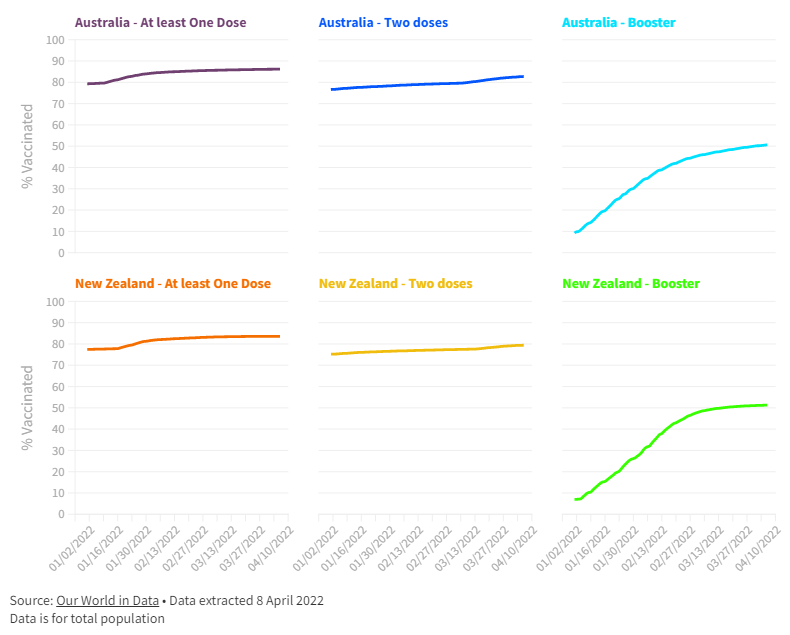 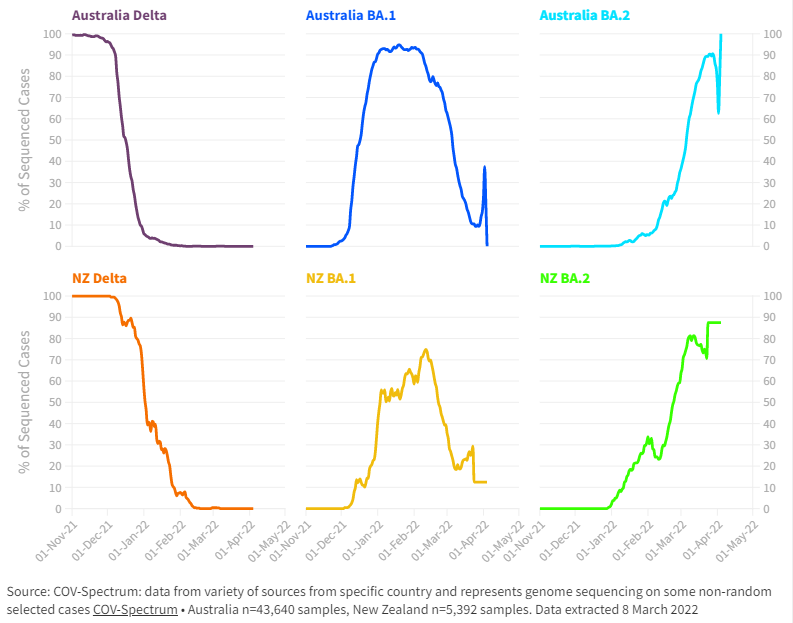 This entry was posted in Uncategorized and tagged covid-19, Omicron Aotearoa NZ, Omicron Australia by carra86p. Bookmark the permalink.