A just released Judicial Review has opened up the question of how “open areas” of buildings (where smoking is permitted in New Zealand) are determined in practice. In this blog post we consider the implications of this ruling and why it heightens the need for an expanded national law on smokefree areas.

This Judicial Review was in response to an application for a review of the “Open Area Calculator” that is used to determine allowable smoking areas in licenced premises. The application was by three NGOs, the Cancer Society, the Salvation Army Trust and The Problem Gambling Foundation of New Zealand (see the Cancer Society’s media release). The particular case these NGOs cited was SkyCity Casino’s Diamond Lounge, which had been given an approved “open area” status – to permit smoking by customers while they gambled.

The NGOs noted that any member of the public would regard such an area as “substantially enclosed” – and hence they argued that it contravened the Smoke-free Environments Act. The view of these organisations equated with our own experience where we have observed very enclosed “outdoor” settings at bars and pubs in which the measured air pollution from tobacco smoke was often quite marked (eg, see the data in this NZ article). This air pollution from smoking in “outdoor areas” also drifts into indoor areas – exposing even more people to this hazard (see another NZ study).

The “Open Area Calculator” in question is routinely used by Smoke-free Enforcement Officers around the country to assess licensed premises. It uses information about the total floor area, openings and windows, side and ceiling measurements – to determine if a setting is an “open area”.

The ruling by the judge was that this Calculator was inconsistent with the definition of an “open area” under the Smoke-free Environments Act. One response to this is that a new Calculator will have to be designed by the Ministry of Health so that it produces results that are more consistent with the intent of the current law. However, we argue that this will still be difficult to do and that there would continue to be problems.

This is because the Smoke-free Environments Act has a contradiction between its purpose and the definition of “internal areas”. The purpose of the section of the Act covering smokefree places is “to prevent the detrimental effect of other people’s smoking” in indoor workplaces and public places – s.4a. The definition of an “internal area” stipulates an area that is “completely or substantially enclosed”. The words “substantially enclosed” mean that smoking can be allowed in partly enclosed areas, which means that – in contradiction to the purpose of the Act – the effects from smoking there cannot be prevented, as there is no known safe level of tobacco smoke. 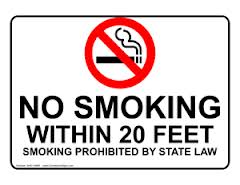 We argue that it would be much more efficient in public health terms to just develop an expanded national smokefree law. Such a law could:

Achieving all of these measures would build on successful local government initiatives around New Zealand and bring the country closer to world-leading jurisdictions – particularly in parts of Australia and North America.

Furthermore, it should result in a situation that members of the public can clearly understand where smoking can and can’t be permitted – so they can report when the law is being breached. It was a design fault to have a law that required a calculator in the first place – since this meant that only experts could determine when the law was being followed or not.

A new law also provides the opportunity to make it fully consistent with the Government’s Smokefree Nation Goal for 2025. As such it could incorporate major endgame strategies such as regular annual tax increases through to this time.

So, we congratulate civil society for exposing the deficiencies in the current law, and we ask that New Zealand politicians respond with a new law. That law needs to work more effectively to protect New Zealanders from secondhand smoke and be a proper platform for achieving the 2025 goal.

This entry was posted in Uncategorized and tagged law, smokefree, smoking, tobacco, well-being by Kate Sloane. Bookmark the permalink.